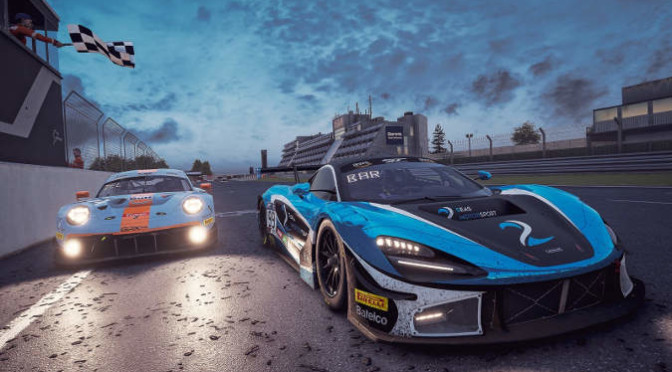 The SRO E-Sport GT Series delivered two action-packed races at the Nürburgring, with Ben Barnicoat beating Louis Deletraz in a photo finish to give McLaren its maiden Pro Series victory while Jesus Sicilia put on a wet-weather masterclass to dominate the Silver contest for Aston Martin.

Silverstone winner Jordan Pepper secured pole position for the Pro race, but the South African only led for a matter of meters as Deletraz (Porsche) made a storming getaway. Things quickly went from bad to worse for Pepper when he was clipped by Barnicoat exiting turn one, sending the Bentley into the run-off and out of contention.

Deletraz led from Barnicoat during the opening stages, but the momentum swung towards the McLaren during the second half-hour. The British ace edged on to the rear of Deletraz and, with 10 minutes to run, made his decisive move into the chicane.

The Porsche came alive once more over the final few laps to allow Deletraz another shot at glory. The two were nose-to-tail on the final lap and made contact at the last corner, but Barnicoat hung on to clinch victory by just seven hundredths of a second.

Barnicoat now leads the Pro Series standings on 43 points, nine clear of Deletraz. Marcucci sits third on 31, with Di Lorenzo (27) and Pepper (25) ensuring that five different brands are represented among the top-five drivers.

Heavy rain lashed the Nürburgring for the duration of the Silver Series contest, which saw Italian ace David Tonizza starting from pole in his Ferrari. But, just like Pepper, his lead did not last long. It was another Porsche driver who got the jump, with Eamonn Murphy diving alongside the Ferrari during the opening sequence of corners and then making a move stick.

Tonizza ran second for the opening laps, until Jesus Sicilia moved ahead in his Aston Martin. By half-distance Sicilia was setting a rapid pace and forced his rival into a mistake at the final turn with 20 minutes left on the clock.

While the Pro race remained tight until the finish, the Silver contest was over the moment Sicilia had clear track ahead of him. The Aston pulled away at an astonishing rate, crossing the line 25 seconds clear of Murphy, who narrowly held off the charging Lexus of Axel Petit.

Ufuk Baba was fourth in his BMW, while fifth went to Jack Keithley (Bentley) after a remarkable recovery driver. The British driver was hit with a drive-through penalty on the opening lap, dropping him to the rear of the field, but made rapid progress and captured a richly deserved top-five result.

Though he could not capitalise on pole Tonizza heads the Silver Series standings for the first time. The Italian has 29 points and is now the only driver in his class to score at all three events. Sicilia is close behind on 27, followed by Selva and Spa winner Andrea Capoccia on 25. With the exception of Tonizza consistency has been hard to come by, with 26 drivers scoring points over the opening three events.

Organised in collaboration with Kunos Simulazioni and Ak Informatica, the SRO E-Sport GT Series is staged using Assetto Corsa Competitzione, the official video game of GT World Challenge Powered by AWS. The Pro and Silver Series will return to action in two weeks’ time when they tackle Circuit de Barcelona-Catalunya on Sunday 31 May. With opportunities to score points diminishing quickly, the pressure is mounting as drivers look to book their spot on the grid for the grand finale. Barcelona promises to deliver even more sim racing action as the season reaches a crucial phase.