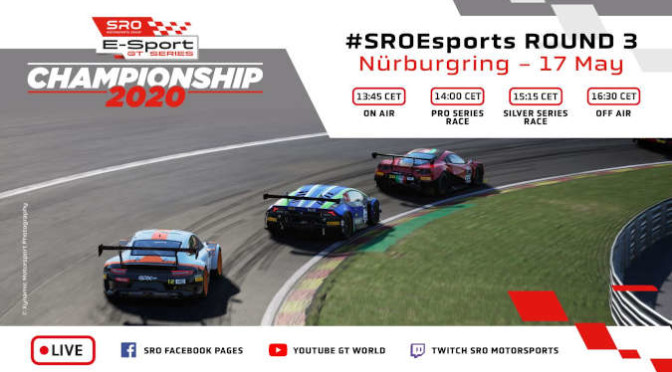 The battle to be crowned SRO E-Sport GT Series champion will shift up a gear this weekend (16-17 May) with a trio of Assetto Corsa Competizione races taking place across Saturday and Sunday.

Organised in collaboration with Kunos Simulazioni and Ak Informatica, the multi-event championship features real-world drivers (Pro Series), leading sim racers (Silver Series) and public qualifiers (Am Series), with the best from each class progressing to a winner-takes-all grand finale.

After competing at Spa-Francorchamps last weekend the Pro and Silver contenders are now preparing to tackle the Nürburgring on Sunday afternoon, while the opening Am Series contest will be staged on Saturday evening at Silverstone.

It is less than seven days since Pro Series ace Lorenzo Marcucci led an Audi one-two at Spa, with Ivan Pareras coming home second to complete a dominant display by the German marque. It will be a difficult performance to repeat at the Nürburgring, with each of the five Audi entrants set to carry significant success ballast at the 5.1km circuit.

The top of the championship remains a close-run affair, with the impressively consistent Luigi di Lorenzo (Aston Martin) leading on 27 points. He is followed by Marcucci and Silverstone winner Jordan Pepper (Bentley), both of whom have 25 on the board for their respective victories.

While this trio already look to be on course for the grand finale, the battle to join them on the all-star grid remains fiercely competitive. Ferrari is among the brands yet to take a podium finish, but the Italian marque is well equipped to do so with sim aces David Perel and Nicholas Hillebrand among its drivers. Porsche is also searching for a strong result and will add Belgian ace Alessio Picariello for this weekend’s contest.

It would be no surprise to see a McLaren back on the podium, with works driver Ben Barnicoat and 2009 F1 champion Jenson Button leading the British manufacturer’s charge. Nissan, meanwhile, has just one Pro Series driver to call upon, but Bryan Heitkotter has shown the speed needed to put his GT-R Nismo at the front of the field.

The Mercedes-AMG roster includes several leading talents, while BMW will have extra firepower thanks to works driver Jens Klingmann, who joins the field at the wheel of the Bavarian marque’s M6 GT3. Lamborghini has added a star from another sport, with Italian football ace Alessio Romagnoli set to take the wheel of a Huracan GT3. A regular for AC Milan and on the international stage, Romagnoli will drive the #63 car in the colours of leading real-world squad FFF Racing.

While the Pro standings are tight, the Silver Series championship is even more difficult to predict. Patrick Selva (McLaren) and Andrea Capoccia (Audi) both have 25 points on the board after winning at Silverstone and Spa respectively, placing them level at the top of the standings. In fact, only two drivers have scored in both rounds: Ferrari racers David Tonizza and Enzo Bonito. With neither having finished on the podium at Spa they will compete without success ballast and could be strong victory contenders at the Nürburgring. The same will not be true of the Audi contingent or Lexus driver Hany Alsabti, who will race with added weight following his excellent runner-up finish at Spa.

Lamborghini looks strong, with both Giovanni De Salvo and Kamil Franczak showing excellent pace last weekend, while Mercedes-AMG man Amir Hosseini can always be relied upon to deliver rapid qualifying laps and combative race performances. The battle for victory should also include McLaren drivers Arthur Kammerer and Nils Naujoks who, like Selva, were pegged back by success ballast at Spa.

The Pro and Silver Series will both contest one-hour races on Sunday afternoon, with coverage getting underway at 13:45 CET. The action will air on television and across a variety of online platforms, including the GT World Challenge website, the GT World YouTube account, and the SRO Motorsports Twitch and Facebook pages.

The Am Series also kicks off this weekend, bringing together a field of 40 talented sim racers who qualified via a public hot-lap competition. Their opening one-hour event will take place on Saturday at Silverstone, with a professional broadcast team featuring Vicki Butler-Henderson, Martin Haven and Paul Jeffrey going live on the RaceDepartment Twitch channel at 21:00 CET. With all three categories competing over the coming days, it promises to be the biggest weekend yet for the SRO E-Sport GT Series.