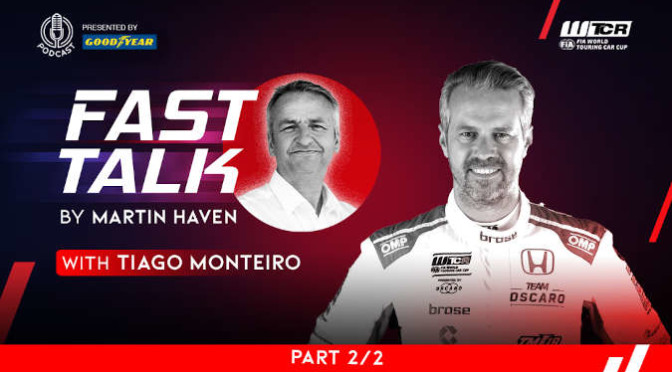 Seriously injured in a high-speed testing crash in 2017, Tiago Monteiro was planning for a life more ordinary in 2018 having accepted he would never race again.

But the fighting spirit that had earned the Portuguese driver a Formula One podium in the 2005 US Grand Prix, and got him through weeks of intensive care, kicked in again, as he explains to Martin Haven in the second part of his WTCR Fast Talk podcast presented by Goodyear.

“When I missed the first race [after my accident] I thought, okay, I’ll be there for the next one in Japan,” Monteiro recalls. “But I couldn’t see with my eyes [like they were], I couldn’t move, I could hardly take a bottle of water with my right arm, so how the hell could I think about driving?

“Then when nothing was evolving at all physically after six months, I said, ‘okay, that’s it’. I was lucky enough to be here and to survive and my goal now was to try to have a normal life, be able to take my kids to school, go and buy the groceries, even if I have to wear glasses and can’t see very well. But there’s no way I’m ever going to drive again and, even if I could, do I really want it, is the risk worth it?”

But encouraged by his family and close entourage and motivated by the feeling of needing revenge for losing out on winning the FIA World Touring Car Championship in 2017, Monteiro sought to defy medical experts by regaining his fitness and being able to see properly again.

It required months of treatment, which included countless trans-Atlantic flights and even a visit to NASA for assessment. However, 415 days after his crash, Monteiro was back on track at Suzuka – via a guard of honour formed by his fellow drivers – for WTCR Race of Japan in 2018.

Then, against all odds, he won his home round of the WTCR in Vila Real last July to complete the ultimate comeback amid highly emotional scenes.

“I won my biggest race to recover from the hardest situation of all,” Monteiro reveals in part two of his WTCR Fast Talk podcast presented by Goodyear. “Any win in Portugal is important, the comeback in Suzuka was important because it was the first main step of my return. But now I was just another competitor and I could be sure none of my competitors would make a special effort because it was me behind them or in front of them.

“The gloves were off and the season was starting again. The level of drivers was just amazing [for 2019] and the return was in very hard conditions and we struggled big time. Winning again on a street track in Vila Real, honestly that’s the highest, highest point of my career because I was coming back from hell.”

But the crash, recovery and victory in Vila Real are just a part of Tiago Monteiro’s incredible career story that began more than 20 years ago and shows no sign of slowing down as he prepares for the delayed 2020 WTCR season, which he’ll contest in an ALL-INKL.COM Münnich Motorsport-prepared Honda Civic Type R TCR on Goodyear tyres.

He spent two years in Formula One scoring points and a podium finish before beginning his FIA World Touring Car adventure, initially with SEAT in 2007 before his association with Honda began in 2012.

01m43: On the grid with Button, Barrichello and Schumacher

03m12: The opportunity of a lifetime after a weird US Grand Prix

07m13: The toothache in Turkey

12m15: The most amazing dentist ever

13m41: Formula One dream is over after unhappy end

16m37: Not prepared to take the risk at Toro Rosso

23m41: Struggling with no power and no downforce but happy

25m10: A delayed start to a WTCC ‘gap year’ waiting for Toro Rosso

28m30: Formula One remains the goal despite the problems

30m13: Falling back in love with racing

34m10: Still a seat but a different seat at SEAT

49m50: The crash that changed everything

53m30: Unconscious in the car, to hospital by helicopter and the biggest headache imaginable

58m35: Hoping for a quick return to defend championship lead

1h00m59: Aiming for a normal life with no prospect of a return

1h01m52: Changing my mind to get revenge

1h05m01s: Racing again an inspiration for his children

1h07m59s: Faster the recovery the better

1h09m20s: Dream return at Suzuka despite the risks

1h15m15s: The highest, highest point of my career after coming back from hell

1h16m45s: Happy to be a problem again for my rivals

1h18m06s: Fantastic Formula One times with 1000 horsepower in qualifying

All Fast Talk podcasts are presented by Goodyear, the WTCR’s official tyre supplier, and hosted by Martin Haven, the voice of WTCR. To listen to parts one and two of Tiago Monteiro’s podcasts click here or follow this link: https://www.fiawtcr.com/wtcr-fast-talk/

Content lists for parts one and two of Tiago Monteiro’s WTCR Fast Talk podcast presented by Goodyear are available separately. A selection of key quotes will also be made available.