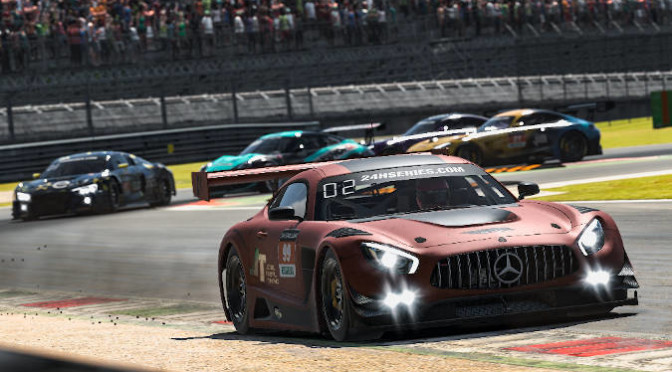 Join us for a special, 12-hour iRacing event at the Autodromo Nazionale di Monza dedicated to our 24H SERIES teams.

In lieu of the current hiatus on worldwide motorsport, CREVENTIC is offering an open invitation to competitors across the globe to join, and compete in, a celebratory 12-hour iRacing event at Monza on 23 May.

The 12H MONZA, to be held entirely via the iRacing global racing portal, is an event for our 24H SERIES teams, and registration is open to everyone.

No entry fees are required. Interested teams and drivers require only an iRacing account and access to the Autodromo Nazionale di Monza on their copy of the increasingly popular PC sim racing game.

While no championship points will be allocated at the 12H MONZA, and results will not count towards the final standings of the 2020 24H SERIES Europe, class-winning teams will each receive a free set of tyres courtesy of 24H SERIES’ long-time partner, Hankook Tires. Winning drivers will receive bespoke trophies.

Details regarding pre-event registration can be found HERE, and you can click HERE for a special promotional price of 3 months for $10 USD.

“It’s important for us to give our teams and drivers a fun experience in these uncertain times. That’s why CREVENTIC decided to host this special 12-Hour race together with our partner, NEO Endurance. Also, every class winning team will be awarded one real set of Hankook slicks that can used during a 24H SERIES race. So winning this Sim race has real world connotations.”

The Autodromo Nazionale di Monza was originally scheduled to open the 2020 24H SERIES Europe season on 27-28 March only for worldwide circumstances to render this impossible. It seemed only fitting then that the home of the Formula 1 Italian Grand Prix would host this special ESPORTS event as well.

“Our European season was initially set to start at Monza. We had more than 60 cars confirmed for the event, and we were looking forward to the pre-race parade that would make use of the Autodromo’s historic banking. That confirmed just how much interest there was in an official CREVENTIC event at Monza. It was any easy decision that, whether it was in reality or virtually, our first European race would be at Monza!”

Entrants are invited to compete in one of four available classes, including GT3, 991, GT4, and TCR. A minimum of two drivers, and a maximum of five, are required per car.

Optional test sessions will be conducted from 19.00 to 21.00 hrs CEST on both 21st and 22nd May, and competitors are invited to join the official Free Practice and Qualifying sessions on 23rd May from 09.30 to 10.30 hrs, and 10.50 to 11.50 hrs CEST respectively. The green flag for the race proper will drop at 12.00 hrs, and the 12H MONZA will continue uninterrupted until midnight.

Coverage of both qualifying and the race will be streamed live on Racespot and the 24H SERIES’ official YouTube channel.

Sorg Rennsport eSports will also be will presented on the start grid with no less than four entries, one in the GT3 class, two in the GT4 class and one TCR entry. Reiter Engineering will field two entries for Maximilian Prodöhl and Sascha Neeb, and Florian Apazeller and Louis Nahser, as will Aston Martin specialists Team Virage for Julien Gerbi, Julian Wagg, and Gabriela Parra, and Philippe Gautheron and Felipe Espinosa.

All teams that enter the 12H MONZA are invited to provide a customised livery for their car(s), complete with sponsor decals, to CREVENTIC in advance. This will allow our admin team time to ensure each entry can don their team colours throughout the weekend.