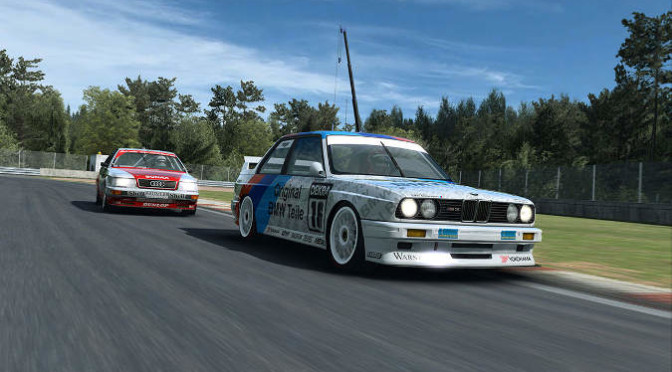 DTM, Europe’s largest touring car series, has announced the first in a series of high-profile esports competitions. The DTM esports Classic Challenge tournament, run in association with RaceRoom, will involve some of the sport’s biggest real-life drivers and most iconic cars.

The five-round retro-themed mini-series will run across every weekend in May and will feature 15 past and present DTM drivers as well as virtual racing influencers racing against five sim racers, chosen randomly from the fastest 100 qualifiers for each event.

The races will draw from DTM’s rich history – reaching as far back as 1992 to provide drivers with classic cars from some of motorsport’s greatest manufacturers, including Audi and BMW. Uniquely, the Classic Challenge will enable the sport’s current superstars to race competitively in some of the series’ most celebrated retro machines.

Before the coronavirus, the 2020 DTM season was originally scheduled to kick off at Zolder this weekend (April 24-26); now, the Classic Challenge becomes the perfect alternative to launch the series’ first virtual race, which will take place on Sunday May 3.

» Quotes – DTM esports Classic Challenge
“With real-world tracks closed internationally due to the coronavirus, we have seen a huge surge in online racing. Now, with the world’s top drivers all keen to compete, and with high-end PCs and a wheel-and-pedal set-up narrowing the gap between the real and the virtual, esports have become an increasingly common element of motorsport life. The DTM esports Classic Challenge is open to anyone who has the skill and commitment to pit themselves against some of the DTM’s best drivers. Who knows, perhaps we’ll find a new sim racing superstar through this competition? Our priority right now is to fill the gap for fans left wanting to see classic and modern DTM machinery raced by some of the sport’s biggest racing personalities.”
Marcel Mohaupt, Managing Director of the ITR
“We love DTM and have been fully supportive of the series on our platform for many years, so it’s fantastic to be involved in the DTM’s first-ever esports competition. RaceRoom has recreated many of the DTM’s greatest cars and circuits, including a faithful recreation of the mighty 1992 season – when the likes of Klaus Ludwig, Hans-Joachim Stuck and Keke Rosberg contested the series – through to the modern-day version of the sport, most recently from 2016. The Classic Challenge offers the perfect opportunity to get our joint-programme off to a strong start, pitting real-life DTM racers against some of the sim racing community’s biggest names. It’s bound to be a lot of fun; and, just as with the real thing, we can expect plenty of thrilling wheel-to-wheel racing.”
Klaus Wohlfarth, owner and founder of RaceRoom