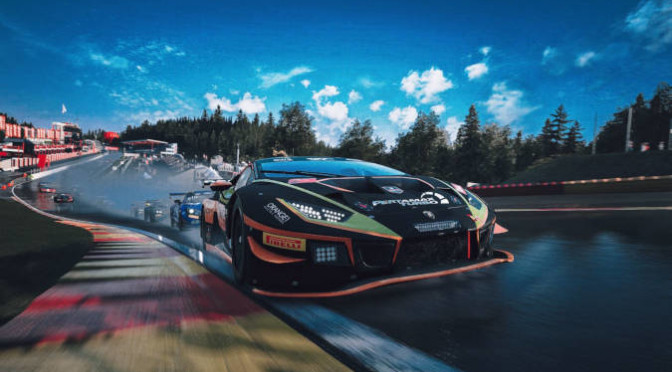 The SRO E-Sport GT Series grid has taken shape ahead of this weekend’s opening contest at Silverstone (26 April), with a host of real-world competitors and leading sim racers set to chase victory in the multi-event championship.

Organised in collaboration with Kunos Simulazioni and Ak Informatica, the new series uses Assetto Corsa Competizione, the official GT World Challenge Powered by AWS racing simulation video game. It will feature three classes competing in separate races, with the top performers coming together to battle for outright victory in a grand finale.

Each category will cater for a different set of drivers. The Pro Series will be reserved for real-world competitors, the Silver Series will feature invited sim racers, while the Am Series grid will be decided by a public hot-lap competition that runs from 26 April through 10 May.

The entry lists for the Pro and Silver Series have been finalised, with a range of talents set to feature in both. A total of 11 brands will be represented across the five-race championship, with each hoping to gain a competitive advantage ahead of the grand finale. These are the drivers who will bid to secure title glory.

5 Pro Series entries
4 Silver Series entries
British marque Aston Martin will have five Pro Series entries at the wheel of its AMR Vantage GT3 including R-Motorsport drivers Ricky Collard, Luca Ghiotto and James Pull. In the Silver class, four sim racers will take up the challenge for Aston. They will include 20-year-old Will Tregurtha, who in addition to his virtual skills can also call upon a successful real-world career in GT machinery.

5 Pro Series entries
4 Silver Series entries
Just as in the real world, Audi will be well represented in the SRO E-Sport GT Series. Five drivers will pilot the R8 LMS GT3 in the Pro class, including youngsters Ivan Pareras and Arthur Rougier. The Silver Series will see a further quartet of Audi drivers vying for victory, with Giorgio Simonini and David Greco among their number.

2 Pro Series entries
4 Silver Series entries
A pair of Pro Series drivers will represent German brand BMW in its M6 GT3. Jody Fanin’s accolades include a British GT title in the GT4 class and the 2017 ELMS GTE crown, while American racer Tyler Cooke comes with experience of IMSA and VLN among other series. There will be a further four Silver Series cars flying the BMW flag, including Turkish racers Mertcan Solak and Furkan Ozcan.

6 Pro Series entries
7 Silver Series entries
Italian brand Lamborghini has called upon a host of real-world talent to compete in the virtual contest, including leading factory driver Andrea Caldarelli. He will be joined by fellow Squadra Corse stars Albert Costa and Dennis Lind, the latter having shown superb speed in the recent SRO Charity Challenge, as well as former grand prix ace Vitantonio Liuzzi. In the Silver Series, top sim racers Kamil Franczak and Jaroslav Honzik will compete in the Huracan GT3 as part of the FFF Esports programme, which is overseen by leading real-world squad FFF Racing.

6 Pro Series entries
4 Silver Series entries
McLaren’s virtual racing line-up is led by one of real-world motorsport’s biggest stars: Jenson Button. The Englishman will drive a 720S in the Jenson Team Rocket RJN livery – the same colours he ran on his way to the 2009 Formula 1 title. Factory drivers Ben Barnicoat and Martin Kodric are also slated to compete, while SRO Charity Challenge winner Arthur Kammerer will represent the brand in the Silver Series alongside fellow frontrunner Nils Naujoks.

5 Pro Series entries
4 Silver Series entries
The Pro Series line-up for German brand Mercedes-AMG is led by Raffaele Marciello, whose host of real-world accolades include the 2018 Blancpain GT Series and Sprint Cup titles and the 2019 FIA GT World Cup crown. International racers Ezequiel Perez Companc and Felipe Fraga will also pilot the AMG GT3. In the Silver Series, Amir Hosseini will look to replicate the blistering pace he showed in the SRO Charity Challenge, leading a four-strong contingent in the sim racing class.

1 Pro Series entry
A Pro entry from 2011 GT Academy USA winner Bryan Heitkotter ensures that the Nissan GT-R NISMO is in the hunt for the SRO E-Sport GT Series title. The American racer’s real-world experience includes stints in Pirelli World Challenge, IMSA, and the GT4 European Series at the wheel of Nissan machinery.

The Pro and Silver classes will each contest five regular season races, with the opening contest running at Silverstone on Sunday 26 April. This will be followed by events at Spa-Francorchamps (10 May), the Nürburgring (17 May) and Circuit de Barcelona-Catalunya (31 May). The fifth race will take place on 14 June, with the venue decided by a public vote, while the circuit used in the grand finale will be chosen in the same way.

The action begins with one-hour races for both the Pro and Silver Series this Sunday, with proceedings getting underway at 13.45 CET. Each will enjoy full coverage across a range of channels, including the GT World YouTube and Dailymotion accounts and the SRO Motorsports Twitch and Facebook pages. Detailed information on how to follow the 2020 SRO E-Sport GT Series will be announced ahead of this weekend’s contest.