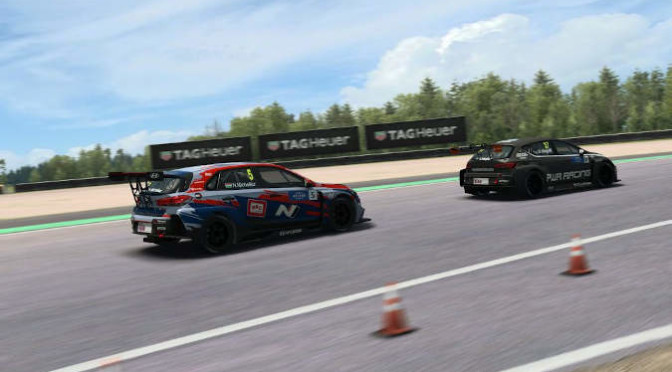 Driving a Hyundai i30 N TCR, Michelisz, from Hungary, was a slender 0.325s slower than Slovakia-based professional sim racer Bence Bánki (Red Bull Racing Esports), which demonstrates the progression being made by the real-life drivers from the WTCR – FIA World Touring Car Cup on the RaceRoom platform.

Michelisz is one of 11 WTCR drivers competing against a host of top esports teams, including FA (Fernando Alonso) Racing Esports, Red Bull Racing Esports and Williams Esports. A number of top simracing talents, such as the Esports WTCR online and live champions from 2019 – Gergo Baldi (Hungary) and Kuba Brzezinski (Poland) – are among those in action.

Scheduled to give WTCR drivers the chance to engage with fans while they wait the start of the 2020 WTCR season, delayed due to the coronavirus pandemic, the pre-season Esports WTCR series features four tracks plus cars and liveries from Esports WTCR 2019.

A prelude to the full Esports WTCR online championship due to begin later this year, the pre-season series promotes the FIA’s #RaceAtHome campaign and lists TrackTime, TAG Heuer and KW Suspensions as partners with a TAG Heuer watch going to the champion.

Zoltán Csuti, winner of the second of two races at a virtual Hungaroring earlier this month, was eighth fastest for M1RA Esports followed by his team-mate and fellow Hungarian Dávid Nagy and Germany’s Moritz Löhner (Williams Esports / CUPRA). Follow this link for the full pre-qualifying leaderboard: http://game.raceroom.com/competitions/1028/leaderboard

Michelisz the man as real-life WTCR drivers narrow gap to pro sim racers
Norbert Michelisz posted the fastest time among the real-life WTCR – FIA World Touring Car Cup drivers in Slovakia Ring pre-qualifying. Hungarian Michelisz was propelled from sim racer to the King of WTCR in a little more than a decade, claiming the prestigious crown last season in a BRC Racing Team-run Hyundai i30 N TCR having started his career competing virtually. And he proved he’s lost none of his online speed with a best lap of 2m07.934s, just 0.325s down on title-winning sim racer Bence Bánki. Niels Langeveld, a podium finisher for Comtoyou Team Audi Sport in the 2019 WTCR series, was the next real WTCR racer, 0.347s down on Bánki. Slovakia’s WTCR race winner Mato Homola was 0.520s shy of the ultimate pace.

Homola revs up to #RaceAtHome in more ways than one in Esports WTCR
Mato Homola starts his ‘home’ round of the Esports WTCR Beat the Drivers series this evening boosted by his pre-qualifying pace and intimate knowledge of the Slovakia Ring.

A race winner in the WTCR – FIA World Touring Car Cup, Slovak star Homola will be one of 11 real-life WTCR racers in action on RaceRoom’s top server from 19h30 CET today. This is what the 25-year-old has had to say.

How well do you know the virtual Slovakia Ring?
“I know it because I’m playing RaceRoom quite a lot and I also do some Slovak online racing and we are using Slovakia Ring. I am pretty confident with the Slovakia Ring, it’s my home race and I think it will be okay.”

You might know the track but you’re up against some really fast, professional sim racers. What do you think of them?
“They are very, very fast. But if you see the leaderboard for Slovakia Ring, the window between the fastest sim racers and us [WTCR drivers] is less than it was at the Hungaroring. I will try to be faster and faster and better and better.”

Why are the sim racers faster than the real WTCR drivers?
“They know the cars a lot and how to behave and how to use the car on its limit. It’s the key for these kind of races. As the real racers, we need to adapt to this kind of conditions and these cars. They are really similar to the real cars but a little bit different how they are behaving.”

How does the sim and real WTCR car compare?
“The biggest difference for me is that I can’t feel the car in my butt, let’s say, I just feel the car on the steering wheel [of the simulator]. You have to understand the car and how it’s behaving in all parts of the corners. From the other side it’s a good point because, as the real racers, we need to focus on the racing craft and pay attention more on the aspects I’ve already mentioned, the steering wheel to feel properly the car and some visual aspects that are on the screen.”

Are you confident you can beat the real WTCR racers?
“It’s really hard to predict, but as in the real cars, I try to put the maximum from my side and then we will see the result. In the Hungaroring I was quite good. I beat two sim racers in qualifying and I was so happy, it was like ‘come on, it’s really good, my biggest achievement’. And in Race 1 I was the fastest WTCR driver.”

While you had a great first race, you had a few problems in Race 2. What happened?
“Someone out-braked himself in T1 and I lost a couple of positions after a really good start. I was behind but I wasn’t the last but then I was in a sandwich with Attila [Tassi] and Kevin [Ceccon] and I was in the barrier. It was disappointing for me. But it was good from the mental thing that I was completely last, but I had the motivation – I wanted to be in the front and I had a good pace. I could overtake a couple of guys, it was nice, good fun.”

How have you been keeping fit for Esports WTCR?
“I have been restoring the vineyard belonging to my family. It is close to Bratislava and it was a jungle there. But we are starting to do it properly and put it into a normal state. It’s getting nicer and nicer but it’s good physical training for me also.”

Baldi is best so far in Esports WTCR
Gergo Baldi starts round two of the pre-season Esports WTCR series with a five-point advantage at the top of the standings. The Hungarian M1RA Esports driver won the first event of the online contest at a virtual Hungaroring earlier this month. His team-mate Zoltán Csuti is second in the points chase following his Race 2 triumph at the Hungaroring ahead of Alexander Dornieden, Mortiz Löhner and Kuba Brzezinski. Follow this link for the full standings: http://game.raceroom.com/championships/48#standings

Penalties issued to Williams Esports pair following Esports WTCR Hungaroring opener
Following the pre-season Esports WTCR series opener, penalty points have been issued to Jack Keithley and Nikodem Wisniewski. Keithley, from Williams Esports, earned 15 penalty points for causing three incidents in the start phases of races, while team-mate Wisniewski was handed six penalty points for “pushing off [Tim] Heinemann and costing him the win” in Race 2, according to RaceRoom officials. Heinemann had been on course to win Race 2 having held the lead from the start, only for contact with Wisniewski at Turn 1 to put him out of first place in the closing stages. He eventually finished third.