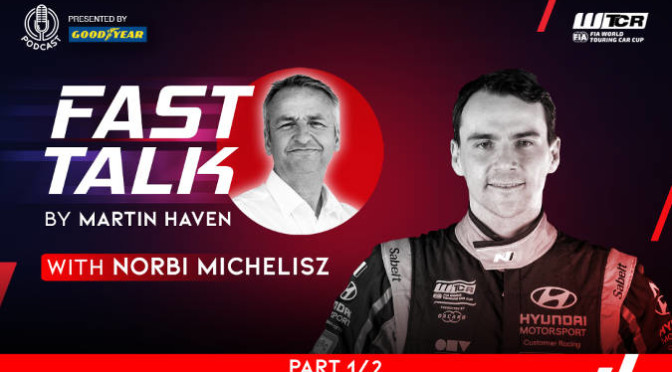 WTCR − FIA World Touring Car Cup drivers will be appearing on a new series of podcasts hosted by the voice of WTCR, Martin Haven.

Having commentated on FIA World Touring Car racing for 15 years, Haven’s knowledge of the sport, his broadcast expertise and rapport with drivers will combine to give fans exclusive insight into the drivers’ key career moments, their lives on and off track, the challenges they’ve encountered and their prospects for the delayed 2020 season.

Available from FIAWTCR.com and other outlets from today (Wednesday) and presented by Goodyear, the weekly WTCR Fast Talk podcast series kicks off with the King of WTCR, Norbert Michelisz. He talks Haven through his remarkable rise from online racer to world title winner and reveals how was on the brink of quitting at the end of the 2017 season, so drained was he following his ultimately unsuccessful bid to win the FIA World Touring Car Championship that year.

François Ribeiro, Head of Eurosport Events, the WTCR promoter, said: “At a time when it’s so important we follow official orders by staying safe and staying home, our drivers have been taking part in a number of online activities to keep fans entertained. Through the WTCR Fast Talk podcast series, Martin Haven will unearth the untold stories, hear about the drivers’ career highs and lows and discover how they’re keeping sharp and in shape for the upcoming season during the coronavirus pandemic, which is central to our thoughts.”

Martin Haven, Eurosport’s lead commentator on the WTCR, said: “Of course we all want racing to resume as soon as soon as it is safe and appropriate to do so. Until then, I hope fans enjoy listening to the WTCR Fast Talk podcasts as much as I am enjoying making them. Despite knowing a lot of the drivers for more than a decade, I’ve learned so much through the podcasts, not just about their careers, but their lives as well.”