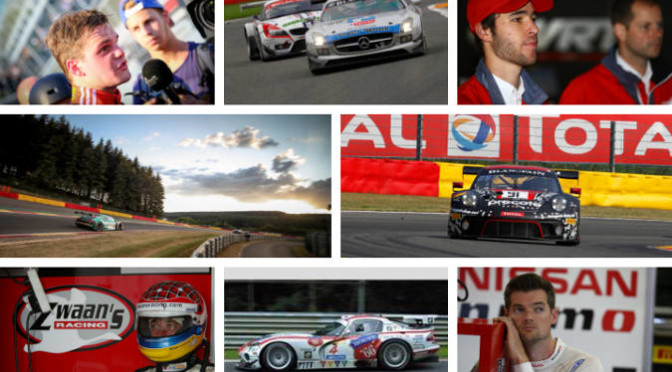 While their achievement has not yet been matched, it’s not for lack of trying. Members of the same family sharing a car has been common practice throughout the Total 24 Hours of Spa’s GT era. In fact, there have been just three races during the past two decades – 2014, 2015 and 2016 – that did not feature at least one “family car”.

As recently as 2018 we have seen siblings share the overall podium. That achievement belongs to Kelvin and Sheldon van der Linde, who finished a fine third driving a Land Motorsport Audi alongside Jeffrey Schmidt. Elder brother Kelvin explains the benefits of sharing with a sibling.

“In the case of me and my brother, we drive very similarly,” he says. “We also have the same seat insert so we never had to change that. It was like dropping on to your own couch!

British drivers Alex and Chris Buncombe were teammates at the race in 2010 and 2013, piloting a Nissan for Bob Neville’s RJN Motorsport squad on both occasions. Like Kelvin, Alex has nothing but enthusiasm for the experience.

“You can’t really ask for more. To have your brother as a co-driver is just one of the best feelings,” says Alex, who is now part of Bentley’s global GT3 programme.

“2010 was my first year doing Spa with Bob’s team, so it was the biggest race of my career. To get to do that with your brother just makes it even more special.

“We’re very competitive boys and we both wanted to be faster than each other, which made us push a bit harder,” he continues. “It changes your mentality. Beating your brother is even better than beating your teammate, so it pushes you on even more.”

Unfortunately, the Buncombes encountered bad luck in both of their outings: an early technical problem sidelined the RJN Nissan in 2010, while the 2013 race ended dramatically after a rear-left failure sent Alex into the tyre barriers at Raidillon after just one hour.

“It was such a shame not to get to the flag in either of the races we did together,” says Alex, who has competed at Spa each year since making his debut in 2010. “I’d love to do it with Chris again. It’s not going to happen this year – he’ll be in the McLaren and I’m with Bentley – but it’s great to be on the grid together. Long may it continue.”

The Van der Lindes and Buncombes are just two of the many examples of family members sharing a car at the 24 Hours. Perhaps the most interesting story is that of the Felbermeyer/Ried crew, which consisted of two father-son pairings.

Horst Felbermayr Snr. and son Horst Jnr. paired up with Gerold and Christian Ried five times between 2002 and 2006. On each occasion they drove for Gerold’s Proton squad (which by 2007 had become Team Felbermayr-Proton) and always raced with Porsche equipment. They did not enjoy a particularly strong debut at the event: the car hit problems after just 14 laps and was subsequently disqualified for receiving outside assistance.

Another DNF in 2003 was followed in 2004 by their best result: a very respectable ninth overall and fifth in the hotly contested N-GT class. The quartet saw the chequered flag in their two other Spa outings, finishing 16th in 2005 (which yielded a GT2 class podium) and then 12th in 2006.

Horst Snr. passed away in March 2020. A committed gentleman driver who shared a car with his son on many occasions, his legacy includes a very special run of participations at Spa-Francorchamps.

In total the Felbermayr /Ried double act contested the race together five times. That number has not been beaten, though it has been matched by two other family pairings. When the Proton Porsche crew took ninth in 2004, they were not actually the best “family car” at the finish. Just one place ahead of them, the #71 JWR Porsche featured David and Godfrey Jones, who were running at the 24 Hours for the second time.

The Jones twins are well known on their domestic racing scene, not least for winning the British GT title together in 2009. After contesting the 24 Hours in 2003 and 2004 in Porsches they returned in 2008, adding an Ascari KZ1 to the field but failing to finish. A switch to the Mercedes-Benz SLS AMG GT3 in 2011 yielded an impressive 11th overall, which also earned the twins and co-driver Mike Jordan runner-up in the Pro-Am class. A final attempt in 2012 ended in retirement.

The other family to have contested the race together on five occasions are the Van Der Zwaan brothers, Arjen and Rob. The Dutch siblings formed Zwaan’s Racing in the late nineties and proved successful for a small team. Unfortunately, their five efforts at the 24 Hours did not yield a single finish. The brothers drove a Chrysler Viper from 2002 through 2004, then a Maserati MC12 in 2005. After a break they returned with a Saleen in 2009 but chalked up a fifth successive DNF.

Nevertheless, their time at Spa saw the Van Der Zwaans drive three of the GT era’s most iconic cars. What’s more, they were joined by a number of impressive teammates, including past winners Marc Duez and Christophe Bouchut, while in 2004 their car ran with sponsorship from GTR – the official FIA GT racing game. They may not have seen the finish, but this was certainly a memorable programme.

There have been other regular appearances from family crews over the years. Jean-Charles and Philippe Levy contested the race together three times, taking a best finish of 21st overall in 2005. More recently we’ve seen the Schothorst brothers, Steijn and Pieter, and twins Alfred and Robert Renauer making multiple appearances together.

Several family crews have made one-off appearances too, including the Bleekemolens (2001), Urbans (2007) and Desbruères (2008) and Greg and Leo Mansell, sons of racing legend Nigel Mansell in 2011. There was another double family car in 2002, when the Hauchard brothers and father-son duo of Jean-Claude and James Ruffier shared a Porsche 911 GT3. And, in 2003, brothers Koen and Kris Wauters – both members of the Belgian pop bad Clouseau – finished ninth overall and second in the G2 class.

But if Jean-Michel and Philippe Martin are to be matched as overall winners, it may take another pair of Belgian brothers to do so. Laurens Vanthoor clinched Total 24 Hours of Spa victory in 2014, while younger brother Dries has emerged as one of the sport’s brightest young talents. They currently race for rival brands – Laurens with Porsche, Dries with Audi – but should they ever compete together at the 24 Hours the Vanthoor brothers would surely be potential winners.

Returning to the Van der Lindes, their run to third place at the 2018 Total 24 Hours of Spa ensured that the South African duo became the first family members to stand on the overall podium together since the Micangeli brothers in 1986. Reflecting on that day, Kelvin sums up what makes sharing a car with a family member special.

“To see [Sheldon] become so successful made me really proud,” he explains. “As his brother, it was like achieving two goals at once. I was just happy that he got a podium at such a big race, more than for myself. For sure it’s cool to have your own success, but in a way I still race to make other people proud. I get more of a kick when I see my family smiling.”

Competing at the Total 24 Hours of Spa is certainly not an everyday family activity. When it goes well, there can be nothing better.