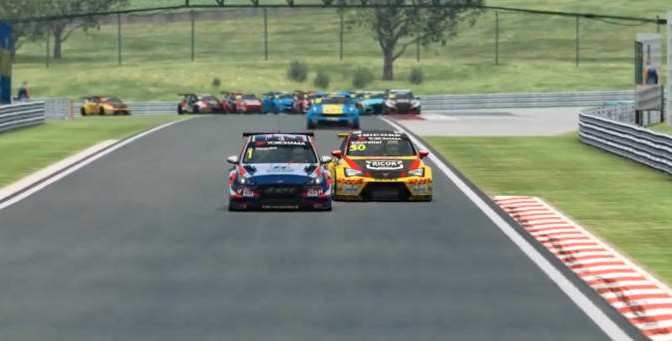 Baldi wins Race 1 from the front, Homola best WTCR driver
Baldi (Hyundai i30 N TCR) led from pole position to the chequered flag in Race 1 with Moritz Löhner (Williams Esports) a constant threat in a CUPRA TCR, the German setting the fastest lap on his way to second place, a mere 0.267s behind Baldi after 14 action-packed laps.

As none of the them have the opportunity to practice extensively like the leading professional simracers do, there was a difference in lap times. However, the WTCR drivers all succeeded in contributing to two high-action races supported by TrackTime, TAG Heuer and KW Suspensions.

First pre-season Esports WTCR event proves popular
A prelude to the full Esports WTCR online championship due to begin later this year, the event attracted 5505 entries, while the server one action was streamed live on the WTCR’s Facebook page and YouTube channel. The live stream was also cross-posted on a number of Facebook pages.