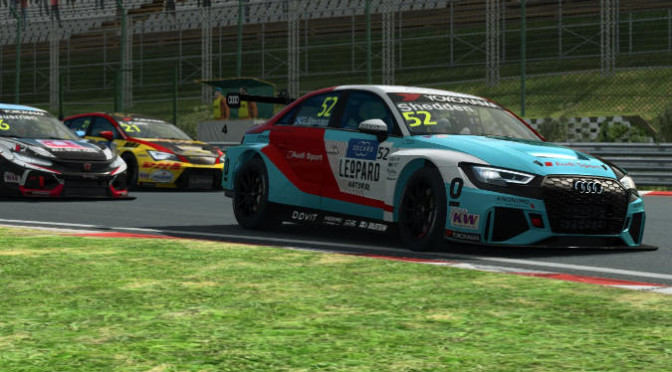 Some of the best online racers will aim to beat the WTCR – FIA World Touring Car Cup drivers contesting the pre-season Esports WTCR opener at a virtual Hungaroring on RaceRoom this evening (6 April).

Twenty simracing talents have qualified to take on 11 WTCR drivers on the RaceRoom platform’s top server with the Esports WTCR online and live final champions from 2019 – Gergo Baldi (Hungary) and Kuba Brzezinski (Poland) – among those in action. They are going up against a WTCR line-up including gamer-turned-racer and 2019 WTCR title winner Norbert Michelisz, Esteban Guerrieri and Yann Ehrlacher.

A prelude to the full Esports WTCR online championship due to begin later this year, the pre-season series lists TrackTime, TAG Heuer and KW Suspensions as partners with a TAG Heuer watch going to the champion.

Scheduled to give WTCR drivers the chance to engage with fans while they wait the start of the 2020 WTCR season, delayed due to the coronavirus pandemic, the pre-season Esports WTCR series features four tracks plus cars and liveries from Esports WTCR 2019.

Leaderboard-topping Keithley the driver to beat
Briton Jack Keithley tops the leaderboard following pre-qualifying and has form at the Hungaroring after winning the opening 2019 Esports WTCR online event last August. The Williams Esports driver has selected an Audi RS 3 LMS and will race as Gordon Shedden. Hungary’s Dávid Nagy, second on the leaderboard, has chosen Norbert Michelisz’s Hyundai i30 N TCR with compatriot Gergo Baldi lining up as Gabriele Tarquini in an identical Hyundai. Slovakia-based Hungarian Bence Bánki, the 2018 Esports WTCR champion, will race as Esteban Guerrieri in a Honda Civic Type R TCR, while Turkey’s Emre Cihan has selected the Honda of Attila Tassi. Follow this link for the full pre-qualifying leaderboard:

Langeveld gives an insight into the challenge ahead for WTCR drivers
Of the real WTCR racers competing at the Hungaroring this evening, Niels Langeveld is perhaps the most active in online circles. That makes him more than aware of how tough the racing will be. “They are professionals and they do it day and night with all the right equipment,” said Dutchman Langeveld, a podium finisher in the WTCR last season. “There’s still quite a lot for us to learn, it’s big fun but it will be difficult against the pros.”

Despite the difficulty of the occasion, Langeveld is relishing the intensity: “The feeling and tension and the challenge of the competition is comparable to real racing. As a racer you want to win and you feel the adrenalin coming because you want to perform.”

Late addition Tassi hoping to shine at ‘home’
Hungarian Attila Tassi, 20, is a late addition to the WTCR driver line-up for Monday’s Hungaroring opener. But he’s relishing the prospect of racing on the circuit he knows best. “It’s nice that this series starts at my home circuit even if we can’t be there for the real event this year – and to be driving my 2019 Honda. I don’t know exactly what to expect, but the main thing will not be the result but to enjoy these races and have fun while driving. Although the RaceRoom system and physics are very different to what I’m used to in simracing, putting that aside I think this a great idea to keep us racing, and it’s nice both to be able to give something back to the fans and keep them entertained during this strange time, and be part of a full team of Honda drivers.”

I need the pressure and the stress from Esports WTCR, says Ehrlacher
WTCR – FIA World Touring Car Cup title contender Yann Ehrlacher can’t wait for the pre-season Esports WTCR series to begin because he’s missing the pressure and stress that comes with racing for real. “Driving on the simulator keeps me awake and keeps me fresh to jump back in the car,” said the 23-year-old Frenchman, part of the Cyan Racing Lynk & Co line-up in WTCR. “I will train and I will take it as a race because I need a bit of pressure, a bit of stress. I will take every single Esports WTCR event as a race to simulate. I will do it properly and hopefully I will end up at the front.”

Ceccon: Kuala Lumpur live final an eye-opener
Race-winning WTCR driver Kevin Ceccon has an idea of the level of the professional simracers following last December’s Esports WTCR live final in Kuala Lumpur. “They are much quicker than us and it’s going to be very difficult for us because they are pros and I could not get all the right equipment together before quarantine began in the region of Italy where I live,” he said. “We saw in Malaysia last year that they are impressively quick. But it’s good to do this to keep the rhythm and be mentally prepared when we can start racing again. It’s like a real race because you have a very intense half an hour and the stress levels are high.”

Guerrieri will be serious and focused in Esports WTCR
Esteban Guerrieri will take the same ‘serious, focused’ approach to the pre-season Esports WTCR series as he would to the real life WTCR – FIA World Touring Car Cup. Last year’s WTCR title runner-up in an ALL-INKL.COM Münnich Motorsport Honda Civic Type R TCR, said: “As long as I can do a good job for myself, in the standards which I think are good, then I will be happy and try to devote as much focus on that as possible. I always believe that the seriousness and the focus that you put on practice is also transferable to what you really compete for – for points, for a championship – so I think a simulator is a really good way to put this into practice. It needs plenty and plenty of hours to get the skills out of the motor; it’s similar, but it’s never the same – there are tricks which probably doesn’t transfer completely to real life that I have to try to learn.”

The esports racers have selected the following cars for the Hungaroring event (drivers listed based on pre-qualifying positions):