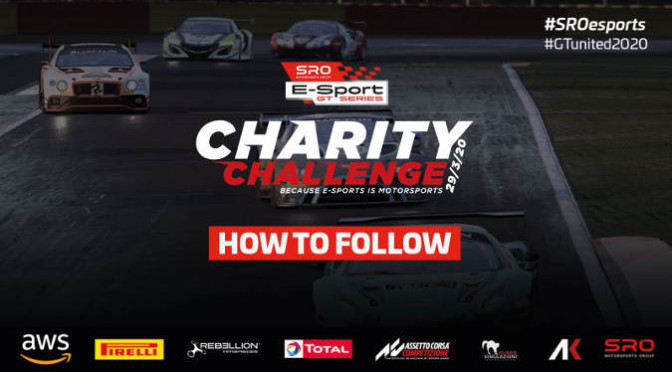 Fans around the world will be treated to more than four hours of live sim racing coverage on Sunday (29 March) when the SRO Charity Challenge is staged at Monza.

Full broadcast details can now be revealed for the Assetto Corsa Competizione event, which will feature real-world drivers, sim racers and 10 wildcard entries selected via a public hot-lap competition.

An all-star team has been assembled for the occasion, with David Addison set to reprise his familiar lead commentator role from GT World Challenge Europe Powered by AWS. Regular broadcast partner and motorsport legend John Watson will also feature, with Wattie primed to provide his famously frank assessment of the racing.

They will be joined by another instantly recognisable name in Jack Nicholls, whose experience in both real-world and virtual motorsport sees him take on the role of host. Their ace crew will be completed by Ben Constandurous, whose extensive CV includes stints in the World Rally Championship and World Touring Car, as well as a wide range of sim racing contests.

The format for Sunday is simple: two semi-finals, with the best 20 finishers from each progressing to a winner-takes-all final race. Live coverage begins at 13:30 CET with a qualifying recap and discussion between the presenting team. The opening semi-final kicks off at 14:00, while the second gets underway at 15:15.

Qualifying for the 40 finalists will take place at 16:30, setting the grid for a concluding one-hour race around Monza that begins at 16:50. The event will be streamed live and in full across a range of social media channels, including the GT World YouTube, Dailymotion and SRO Motorsports Twitch account and Facebook pages. Further streams will be available via The-Race.com, Motorsport.com and Motor Trend on Demand, while fans can join the conversation in real time with @GTWorldChEu on Twitter.

The race will also be broadcast by television stations across the globe, with live coverage extending to Europe, Asia, Africa and beyond. Organised by SRO E-Sports GT Series, Kunos Simulazioni and Ak Informatica, Sunday’s event will raise money for the COVID-19 Solidarity Response Fund. All entrants have made a minimum €15 donation to the cause, which supports the World Health Organisation and its partners in their response to the current global pandemic.