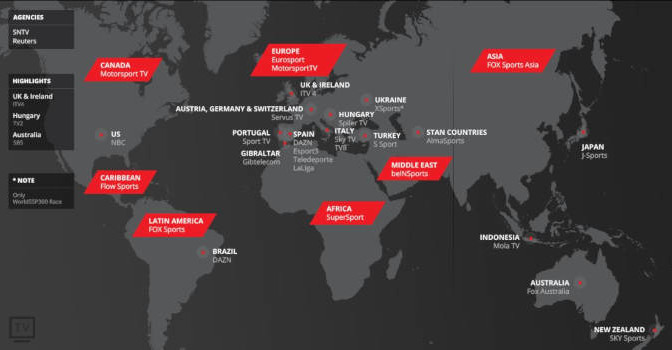 Dorna WSBK Organization is delighted to announce that the MOTUL FIM Superbike World Championship TV coverage is set to reach new heights for 2020. Growing year on year, there are even more broadcasters who will be bringing the best of the world’s fastest production-based motorcycle Championship to viewers around the globe.

Eurosport remains a strong broadcasting partner of WorldSBK, continuing to showcase the Championship with extensive coverage in 51 different countries in Europe. Eurosport UK will cover all rounds with personalised content, which will be exclusively live for British and Irish fans. Furthermore, the fans will be able to enjoy 46-minute highlights packages each Tuesday after the rounds through the ITV network.

In Spain, all classes will be featured on national broadcaster RTVE (Teledeporte Channel), which is set to bring free-to-air WorldSBK coverage once again, whilst ESPORT3 will bring action to the Catalonia region, including the inaugural Catalan WorldSBK Round. DAZN will bring Spanish fans even closer to WorldSBK in their second season, with live and on-demand coverage with a wide variety of devices. Moreover, fans will be able to watch Alvaro Bautista in his second season, taking up a new challenge at the Spanish-run Team HRC. In WorldSSP, Isaac Viñales (Kallio Racing) features in a star-studded field, whilst Ana Carrasco goes in search of recapturing the WorldSSP300 title. The entirety of Spain can also follow the action via the LaLiga App. Portugal will not miss any action from the 2020 season thanks to SportTV, while GIBTelecom will air WorldSBK in Gibraltar.

SSport will continue to provide coverage for Turkish fans for two more years, meaning the country will enjoy star Toprak Razgatlioglu, who took his and Turkey’s first wins in 2019, whilst also enjoying Can Öncü in WorldSSP. Their network also brings Azerbaijan and the Central Asian countries closer to the action, whilst AlmaSports provide comprehensive highlights packages. Motorsport TV will keep offering the Championship as a pan-European OTT platform, and they’ll also be bringing the motorsport excitement to Canada for the first time, enhancing the North American coverage for the new season.

Middle Eastern and North African (MENA) fans can enjoy 2020 coverage through Bein Sports. Supersport Africa will continue their coverage of the Championship in across Africa for one more season, with South African Steven Odendaal set to be on the fans screens in his debut season.

Mola TV provides the passionate Indonesian fans live coverage for their first season, meaning the country with the fourth-largest population in the world can witness Galang Hendra Pratama fighting for the WorldSSP title in his rookie season. Japanese fans can continue following local star Takumi Takahashi and WorldSSP rider Hikari Okubo on JSports. The 2020 season also sees the return of Honda as a factory team, with their new CBR1000RR-R. Fox Sports Asia will also broadcast across the continent for one more season, enhancing coverage in a crucial market.

Oceania will not miss out on coverage as Fox Sports Australia will continue to show WorldSBK until 2022. New Zealand will keep enjoying racing action for two more years on Sky Sports.

A new broadcasting partner is set to bring WorldSBK action to over 90 million homes in the USA, as NBC Sports Network will begin showcasing WorldSBK. American fans can enjoy home-hero Garrett Gerloff, who aims to earn his stripes in WorldSBK during his rookie season, after promising testing.

In Latin America, fans can keep up with Argentinean rider Leandro Mercado as well as Chilean WorldSBK rookie Maximilian Scheib (ORELAC Racing VerdNatura) with Fox Sports. Brazilian devotees can enjoy live coverage from DAZN once more, as there will be a strong presence of three Brazilians in WorldSSP300. Flow Sports will continue to be the broadcast partner of WorldSBK, providing excellent coverage to the Caribbean.

SNTV and Reuters agencies will be spreading WorldSBK actions around the world, involving even more broadcasters in showcasing highlights and other stunning racing contents worldwide.

Manel Arroyo, Managing Director at Dorna Sports, stated: “To welcome new broadcasters to the MOTUL FIM Superbike World Championship is always a positive, especially as we look to bring more comprehensive action to wide audiences. The 2020 season is set to be one of the most unpredictable, with new teams, five factory manufacturers and more nationalities in the Championship, it is important to showcase the international diversity across classes. Last year, we reached more fans through TV coverage than any other season and that is the target again for 2020.”

The WorldSBK VideoPass will be available in all four corners of the world, giving fans comprehensive live coverage as well as exclusive behind-the-scenes insights and a 360º experience on a portable basis, meaning they can access the World Superbike Championship wherever they are.