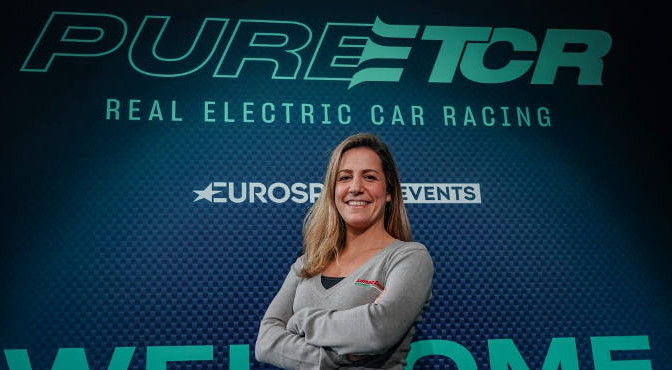 PURE ETCR will ‘stir emotions’ in motorsport fans across the world, according to the woman in charge of the Alfa Romeo Giulia ETCR electric racing programme.

Michela Cerruti, Operations Manager of Romeo Ferraris, the organisation responsible for producing the Giulia ETCR, attended the series’ official launch in Paris on Wednesday, and was excited by what she saw.

“When I was sat in the presentation and I saw the videos of the battles, all the emotions you get with high-intensity motorsport were really stirring inside me,” said Cerruti, who raced in the first season of Formula E and has had race-winning success in both single-seater and GT racing.

“You can already imagine the adrenaline building as the cars sit behind the starting gate, waiting for the lights to go out.

“I said to Francois [Ribeiro, Head of Eurosport Events, the PURE ETCR promoter] that people will now have very big expectations of the series, but I think with Eurosport Events’ record of promoting touring cars, this can be a hugely successful series.”

PURE ETCR’s innovative format centres around a number of short, sharp on-track battles of 8-10km each, with a knock-out format building towards a Grand Final. Cars line-up alongside each other inside a giant starting gate, with thrilling wheel-to-wheel action guaranteed from the rear-wheel-drive machines.

Four showcase events will take place in 2020 on a mix of street circuits and traditional courses, book-ended by time trial events at the Goodwood Festival of Speed and Daytona 24 Hours.

Romeo Ferraris, who were responsible for the Alfa Romeo Giulietta TCR, and have close ties to the Team Mulsanne squad that won WTCR races in 2018 and ‘19, announced last December that it would produce an ETCR version of the Giulia.

Cerruti said that the build process of the car was on target and that it is set to hit the track in the spring.

“That’s the plan,” she added. “We know other constructors are ahead of us on their development process, but we didn’t have an appropriate road-going product to begin with as our base, so we’ve started from scratch really.

“The electric technology is new to us, but we’re learning every step of the way and PURE ETCR, as the flagship ETCR series, is definitely somewhere we’d like to see the Giulia competing.”

PURE ETCR kicks off with a launch event – including time trial – at the Goodwood Festival of Speed, UK, on July 9-12. The first of four Showcase race events – using the Battle format – will be at the Salzbürgring on July 24-26.

François Ribeiro, Head of Eurosport Events, the PURE ETCR Promoter, said: “We can’t wait to see the Giulia ETCR in action. The road-going version is such a sporty and appealing car. We hope to see it in PURE ETCR and are certain it will be a great competitor to fight its way through the Battles.”