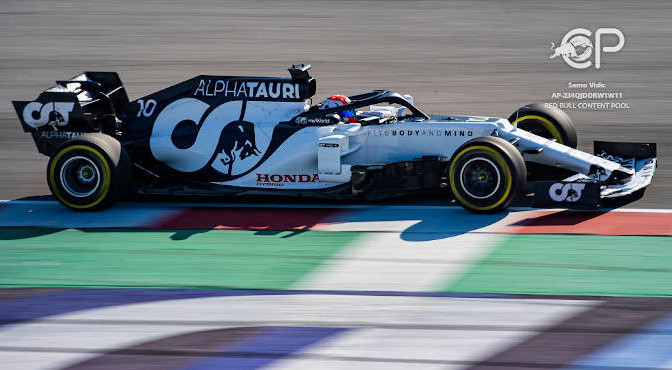 Daniil Kvyat (Car #26):
“I think today felt quite short, it was only half a day, but it was productive as we squeezed the most out of it. We had a lot of high-quality tests and tried to cover as many laps as we could, so we did well in that respect. Now we need to analyse everything and work on more tests to be ready for next week. The car feels like it’s in the ballpark and we’re still fine-tuning it like everyone else is, but the initial feeling is we’ve made some progress compared to last year. It’s hard to say how much or if it’s enough, but we’re still trying to unlock the full potential of the car, both on short and long runs.”

Pierre Gasly (Car #10):
“It was a really positive afternoon, I had a few more laps in the car and completed some more tests. We managed to do all of our long run programme. Unfortunately, we had a small delay toward the end of the day which meant we couldn’t finish our performance runs, but it wasn’t too big of an issue as it was already covered by Daniil in the morning session. All in all, it was a positive three days for the team, there are a lot of things to analyse for next week, so we can find even more performance.”

Jonathan Eddolls (Chief Race Engineer):
“We completed another successful testing day in Barcelona to wrap up what has been a fairly intense three days. Daniil drove in the morning and started the day with the typical aero rake running and some further mapping work. Data analysis from last night revealed some interesting setup directions, so these were explored further during the C3 short runs in the morning to confirm the findings. We then gave Daniil the opportunity for some performance running on the C4 compound and the car behaved well in this configuration. He closed the morning with two long runs on the C2 compound, testing items to assist with tyre management to build up knowledge for the season ahead. Pierre took over the AT01 for the afternoon and planned a number of mechanical and aerodynamic tests over short and long runs. Unfortunately, we lost some test time at the end of the day as we had to renew a fixing in the floor – it was a simple part but time consuming to repair. We are already half way through track running prior to Melbourne, but we have gathered a lot of data exploring the envelope of AT01 and already have a good understanding of the behaviour and characteristics of the car. The team will spend the coming days analysing the data in detail and feeding the results into the testing matrix for the final three days of testing next week.”

Franz Tost (Team Principal):
“We had three very fruitful test days here in Barcelona, completing more than 100 laps every day – 384 in total – and learned a lot about the car, but we still have to work on the final setup. However, I think we are going in the right direction which is a good sign. It’s a pity we lost some track time today due to a little issue toward the end of the day, but we got a good understanding of the new aerodynamics on the car. We also ran a few long runs which meant we could get a clearer picture of tyre wear and degradation. The engineers now have a lot of data to analyse to come back well prepared next week for the second test. In general, I must say that Scuderia AlphaTauri seems to be in a good position for the upcoming year.”

Toyoharu Tanabe (Honda F1 Technical Director):
“On the final day of the first test of 2020, both our teams completed a good number of laps. For Scuderia AlphaTauri, Daniil drove in the morning and Pierre in the afternoon for a total of 121 laps. AlphaTauri continued working on optimising the PU. We now have plenty of data to analyse at the mid-point of the pre-season tests. The fine weather and the fact there were very few red flags over the past three days means that this was a very productive first test for Honda and our two teams. We now have four days until the second test and everyone back in Japan, the UK and here in Spain is going to be very busy analysing a huge quantity of data, to make a further step forward in the final three days of track time before the first race. In total, the four Honda-powered cars completed 855 laps, equivalent to a distance of 3,980.025 kilometres.”