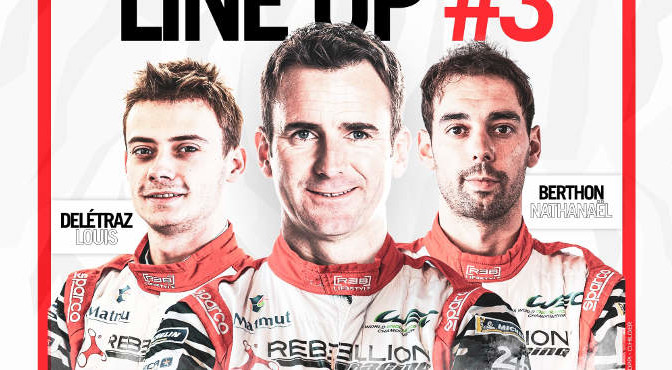 The crew of the second car will be composed of Nathanael Berthon and Louis Delétraz, official REBELLION Racing drivers, and the third-time Le Mans winner Romain Dumas. The car will get the number 3.

As a reminder, the REBELLION R-13 N. 1 car will always be driven by Bruno Senna, Gustavo Menezes and Norman Nato.
“We are happy to trust Romain Dumas after our journey and success in the Dakar, keep on working together seemed obvious! He will be a great help alongside his young teammates thanks to his experience at the 24 Hours of Le Mans. We also support our young and talented Swiss driver, Louis Delétraz for his very first participation in the famous Le Mans race! We also hope that Nathanaël Berthon can fully express his talent in this 88th edition.”

Alexandre Pesci, President and Owner of REBELLION Racing
“I am extremely happy to be part of the REBELLION Racing Team for Spa and Le Mans. When Alexandre Pesci told me about this opportunity a few months ago, I did not hesitate for a second. With my teammates and the R-13 car, we will be a serious crew!”

Romain Dumas, R-13 N. 3 driver
“It is always a pleasure to race with a professional Team such as REBELLION. It demands to raise your performance to the highest! On top of everything, having Hugues de Chaunac and Oreca as the technical support gives us an incredible boost. To be back for two mythical races as Spa and Le Mans is an extra motivation and I am very proud to have been drafted by the Team. I take this opportunity to thank Alexandre Pesci and Calim Bouhadra for their trust.”

Nathanaël Berthon, R-13 N. 3 driver
“I am very happy to join REBELLION Racing for the 6 Hours of Spa and the 24 Hours of Le Mans. Endurance is a discipline that I really like for a long time, I could not dream better to start in better conditions in LMP1 and in WEC. REBELLION is one of the best Teams in the world, it is a pride to participate in my first 24 Hours of Le Mans as a Swiss driver in a Swiss Team. This is a big challenge that I am delighted to take up with Romain, Nathanaël and the whole Team!”