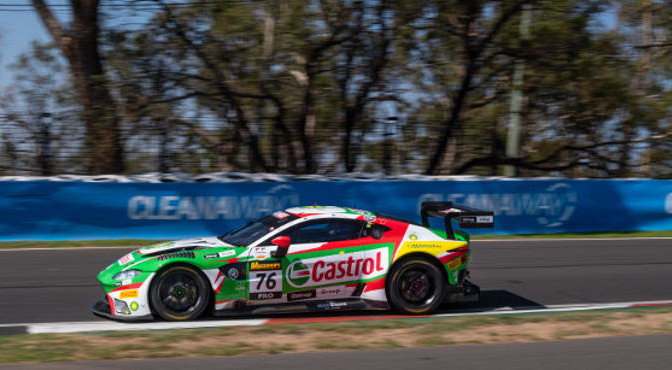 R-Motorsport’s qualifying at Bathurst was a roller-coaster of disappointment tinged with optimism. While Jake Dennis, Scott Dixon and Rick Kelly made it through into the pole shootout for the top ten starting positions, their team-mates’ race weekend ended prematurely. 25-year-old Marvin Kirchhöfer was involved in an accident in Q2 which badly damaged the team’s #62 Aston Martin Vantage GT3. He was uninjured but could not continue, and Luca Ghiotto and Olli Caldwell were left on the sidelines because of the damage.

“Obviously, we had hoped for a bit more after going through to the shootout,” said Jake Dennis after the session. “My lap was not perfect, but we can still be satisfied with our progress over the weekend. We must now prepare ourselves as best we can for the upcoming race. Practice has shown that it’s going to be a tough fight.”

Marvin Kirchhöfer too had been well on his way to enabling R-Motorsport to go through to the prestigious pole shootout. However, he ran wide in the area near The Grate, hitting the track barriers a few minutes before the end of Q2. “I grazed the wall and think that I damaged the rear right suspension. And as a result, I was unable to avoid an accident. I’m OK as far as my health goes but am really upset for our hard-working team, as we will not be in the line-up with car #62,” said Kirchhöfer, who looked extremely disappointed.

Dr Florian Kamelger, Team Principal R-Motorsport: “A qualifying with ups and downs did not make for an easy day for our R-Motorsport team here at Bathurst, who are working very hard in this extreme heat. We are pleased with tenth place on the grid for our #76 Aston Martin Vantage that races in the colours of BP and Castrol. Jake showed his class at driving once again and secured a good starting position for the race along with team-mates, Rick and Scott. Unfortunately, our #62 Aston Martin Vantage is out of action following Marvin’s accident. Consequently, Luca and Olli will be unable to make their Bathurst race debut. We were all shocked when we saw pictures of the accident and were really relieved that he was able to get out of the car uninjured. We want to thank AMR for constructing such a safe car for us. We must now look ahead to the race, in which we want to put on a good show for our Australian fans.”

The race on the Mount Panorama Circuit starts on Sunday morning at 5:45 a.m. (local time). The event in Australia also marks the start of the Intercontinental GT Challenge season.