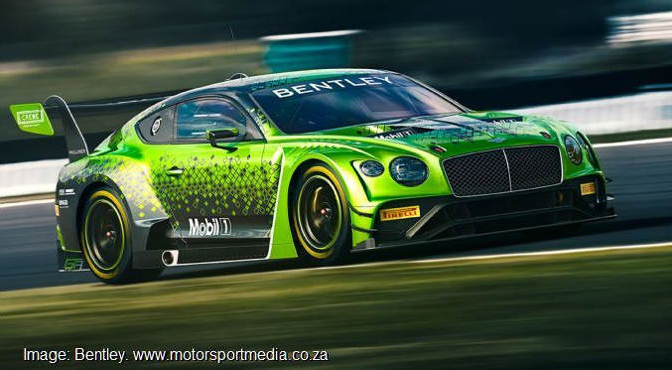 South Africa’s Bentley Boy, Jordan Pepper is raring to go as the Intercontinental GT Challenge limbers up for its season-opening Liqui-Moly Bathurst 12 Hour in Australia Sunday 2 February. Pepper once again races for the factory Bentley team in the five-round series, which will move on to Belgium’s Spa 24 Hour in July, to Japan for the Suzuka 10 Hour in August, the Indianapolis US 8 Hour in October and then on home to November’s Kyalami 9 Hour.

“It is a dream come true to come from where I have and continue as a factory Bentley Team M-Sport driver for a third straight season.” Jordan admitted. “I’m privileged to be in the comfortable, stable environment of a top team striving to win on one of the world’s leading series — the Intercontinental GT field is like no other and it’s growing even stronger with new drivers and manufacturers and we kick-start the season with a highlight race at Bathurst.”

Jordan will be driving in a revised line-up versus the 2019 Bathurst and will share his Bentley Continental GT3 with Frenchman Jules Gunon and Belgian Maxime Soulet, both of whom he raced the Kyalami 9 Hour with later last year. “This is my third season together with Jules — we know each other well and it’s good to have super fast Max on board — we are good friends off the track and we also like a similar car set-up too.

“Our goal is as always, to chase podiums, wins and the championship. “Bathurst suits our Bentley well and it’s a race we have not yet won, so the objective is to capitalise on our strengths and to chase the best results. “It’s my second year at Bathurst, which is a most daunting track — it is fast and tight and through those unyielding walls around the Mountain and that took some getting in to, so I’m happy to at least bring a little experience in 2020.

“Bathurst is also a most interesting race because it has no defined stint times, so we can play with strategy and that gets the flow of the race going, but there’s also a high risk of crashes there, which makes the safety car a major factor. “All of which makes life pretty challenging, so it’s all about saving tyres, fuel, brakes and the rest of the car for the end, unlike at Kyalami where it was a flat out sprint all the way and so difficult to make up lost ground.

“Last year never ended as we’d have liked — we led my 9 Hour home race, but ended up twelfth. “The three of us have however picked up on what we learned there and we have worked hard on our own program, so we are ready to fight hard and fight well. “So yes, our Bentley Continental GT3 is ready to thunder down under to hopefully realise my dream to stand on the top step of that Bathurst podium — let’s make it happen!”