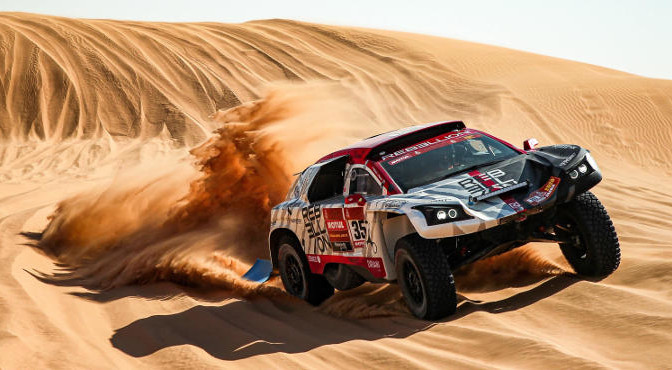 The 42nd edition of the Dakar Rally started in Jeddah on January 5th, 2020. Twelve stages later, after defeating the traps and overcoming the effort of the most demanding rally raid in the world, Alexandre Pesci and his co-driver Stephan Kuhni rallied to the finish in Qiddiya, near the capital of Saudi Arabia Riyadh. A great adventure for this crew with no experience in rally raid, and who had to, day after day, learn and adapt to the most extreme conditions.

The buggy REBELLION DXX, perfectly prepared in the workshops RD Limited (Romain Dumas’s team), drove more than 7800 km. The assistance led by the RD Limited mechanics and engineers made a major contribution to keeping the buggy in good condition in order to reach the finish line of each stage.
For the first time, the Dakar took place in Saudi Arabia, after 11 editions in South America. In a country where the desert is king, the key to success will have been navigation in the dunes. Moreover, this new era of the Dakar has given drivers impressive scenery and incredible memories.

At the end of this first participation the Rebells Team ends third of the Rookie classification and eleventh in the Petrol 2-wheel drive category.
REBELLION Racing, twelve years at the highest level of endurance racing, has successfully started in a new competition.

“The goal of rallying the arrival of the Dakar 2020 has been achieved. The team has done an excellent job in recent months to provide us with the best possible conditions. In addition, I would like to thank once again Mathieu Beaumel and Nasser Al Attiyah for their training in piloting, which enabled us to understand the workings of the Dakar more calmly. Finally, I would like to acknowledge the excellent organization of the rally, despite the vagaries.”