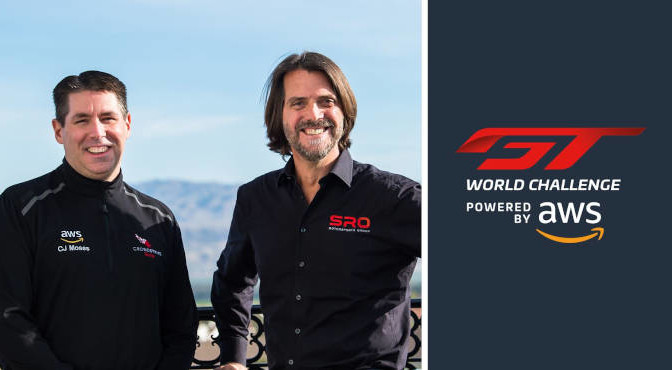 SRO Motorsports Group has agreed to a significant expansion of its collaboration with Amazon Web Services (AWS) that will encompass a major presence in GT World Challenge and continued support for a number of SRO America programmes.

For 13 years, AWS has been the world’s most comprehensive and broadly adopted cloud platform, offering over 175 fully featured cloud computing services. Last year the firm entered into a new collaboration that saw AWS become the official cloud and machine learning provider for SRO America, as well as a series partner of Pirelli GT4 America and TC America.

Following on from a highly successful initial season, an expanded agreement has been reached that will see the company increase its commitment to become the new title presenter of GT World Challenge. Composed of continental series in Europe, Asia and America, this global platform allows international automotive manufacturers to compete through their customer racing programmes.

In 2020 it will be known as GT World Challenge Powered by AWS, with 22 non-clashing events staged globally under this name. Each regional series will also carry the Powered by AWS title throughout the upcoming season.

As part of the agreement, AWS has become the official cloud and machine learning provider for GT World Challenge. This will allow SRO to leverage the firm’s extensive suite of innovative cloud services, as well as its artificial intelligence (AI) and machine learning (ML) capabilities, to provide an enhanced experience for teams, drivers, and fans.

AWS will also continue as an official series partner of Pirelli GT4 America and TC America, while adding its support to the newly launched GT Sports Club America. What’s more, the Pirelli GT4 America event at Long Beach will be officially ‘Presented by AWS’ for the second year in succession.

The first GT World Challenge Powered by AWS event takes place at Circuit of the Americas (6-8 March), while the Asian series begin at Malaysia’s Sepang International Circuit (28–29 March) and the European season launches at historic Monza (17-19 April). All 22 races will be broadcast live and in full on the official GT World Challenge website and across its social media platforms.

Stephane Ratel, SRO Motorsports Group Founder & CEO: “It gives me great pride to welcome AWS as the new title presenter of GT World Challenge and to secure the company’s continued commitment to SRO America. As an innovative and future-focussed brand, AWS is the perfect fit for this fast-moving sport and represents the ideal partner for our global championship. I look forward to exploring the potential of their cloud computing capabilities and to a successful season for GT World Challenge Powered by AWS.”

CJ Moses, AWS Deputy CISO: “We are excited to be working alongside SRO to develop the next generation of GT sportscar racing. Innovation means challenging the status quo and working closely with SRO allows them to use our broad catalog of cloud-based services, unleashing innovation in all aspects of their sport. I’m particularly looking forward to helping them leverage our deep portfolio of AI and ML services so they can deliver even greater insight into the dynamic world of GT sportscar racing.”

A total of 22 non-clashing events will play out during the 2020 season, with sprint and endurance rounds staged across Europe, North America and Asia. This includes the historic Total 24 Hours of Spa, which becomes part of the schedule for the coming season.

First launched in 2019 as Blancpain GT World Challenge, the concept unites three continental championships to create a comprehensive global platform. While each series retains its own identity – with drivers’ and teams’ titles up for grab in Europe, Asia and America – there is the added appeal of an elite manufacturers’ contest.

Brands competing in all three series are eligible to compete for the global GT World Challenge Powered by AWS title through their customer squads, with points awarded to the best-finishing car per brand in each class. The allocation differs depending on the event format: 25 are on offer at sprint races, while 100 will be awarded at the Total Spa 24 Hours. The number of points scored is multiplied by the amount of cars competing in each class to give the final total.

The inaugural title was won by Mercedes-AMG, which defeated fierce rival Ferrari to be crowned champion. 2020 will represent the second season for the global GT World Challenge format and features an expanded schedule. 10 rounds will take place in Europe, while the Asian and American series will each consist of six events. Drawing on the wealth of experience and knowledge accumulated by SRO Motorsports Group, GT World Challenge aims to be the benchmark in global customer racing.

With more than 25 years’ experience at the forefront of a continuously evolving industry, SRO Motorsports Group is the established international leader in GT racing.

Best known for the development and implementation of the GT3 and GT4 regulations, SRO promotes and organises championships that embrace professional and amateur competitors. Its portfolio of highly regarded series includes continental GT World Challenge Powered by AWS categories in Europe, America and Asia, which are combined to determine a global manufacturers’ champion, while the flagship Intercontinental GT Challenge Powered by Pirelli features events on five different continents.

The 2020 season will see more than 100 races run under the SRO Motorsports Group banner, highlighted by the prestigious Total 24 Hours of Spa. In addition to promotion and organisation, the company operates SRO Race Centre by MMC – a high-level technical facility at Circuit Paul Ricard – and provides the ultimate driving opportunities at world-renowned venues through Curbstone Track Events.

SRO Motorsports Group is chaired by company founder and CEO Stephane Ratel. With offices in London, Paris, Liège, United States and Hong Kong, its work is facilitated by a dedicated global team of full-time and freelance staff.

Combining a passion for performance with industry-leading expertise, SRO continues to play a key role in shaping the future of international GT racing.