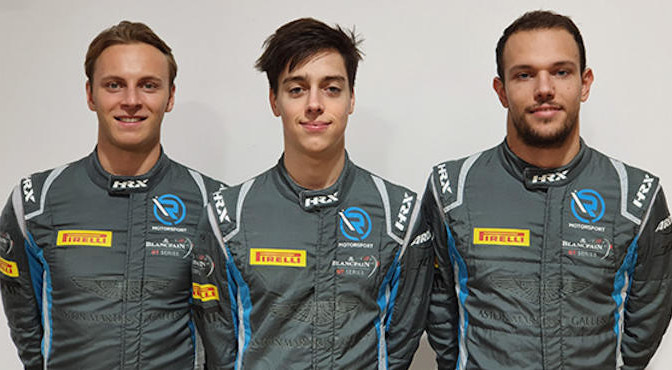 Marvin Kirchhöfer, Olliver Caldwell, Luca Ghiotto – Copy: R-Motorsport
Niederwil – The 2020 season is about to get underway on the fifth continent. On the weekend of 31st January – 2nd February, R-Motorsport will be contesting the prestigious Bathurst 12 Hour race in Australia. The team based at Niederwil near St Gallen in Switzerland will be fielding two Aston Martin Vantage GT3s at the Mount Panorama Circuit.

17-year old Olli Caldwell from Hampshire/UK and 24-year old Luca Ghiotto from Vincenza/Italy will be the latest newcomers to R-Motorsport. They will be joined by experienced German GT3 driver Marvin Kirchhöfer, 25, who finished runner-up in last year’s Bathurst 12 Hours.

In the #76 Castrol branded Aston Martin Vantage GT3 New Zealander Scott Dixon, Australian Rick Kelly and Britain Jake Dennis, the latter crossing the finish line after a thrilling last phase of the race in second place in the R-Motorsport Aston Martin Vantage in 2019, will be sharing the cockpit.

The team’s youngest rookie Olli Caldwell debuted in junior karting in 2013 and progressed in various karting categories before starting his single seater career with a few Formula 4 races in 2017. In 2018, the Englishman finished 3rd overall in the Italian Formula 4 Championship and in the same year he also contested the ADAC Formula 4 Championship. One Highlight of Caldwell’s first complete year in automobile sport was his win of the GT4 categoriy in the Abu Dhabi 12H in December 2018. In the 2019 season, Caldwell stepped up to the Formula 3 Regional European Championship ending his first F3 year in 5th. The Bathurst classic will be his very first GT3 race.

“I am really excited to join such a professional and capable team like R-Motorsport in the famous Bathurst 12 Hours,” enthuses Caldwell. “The Swiss outfit has a proven record of success and I am looking forward to the enormous challenge that the Mount Panorama circuit offers. I want to learn as much as I can from everybody in the team to quickly adapt my driving style to the Aston Martin Vantage GT3’s needs with the main target to support my team mates in a capable way. I can’t wait to go out onto the Mountain circuit for my first lap.”

“We are proud to enter our strongest GT3 driver line-up ever. With Luca Ghiotto and Olli Caldwell joining R-Motorsport GT3 Pro Marvin Kirchhöfer we welcome two young talents at the season opener at Bathurst,” says team principal Dr. Florian Kamelger. “Together with the drivers squad of Scott Dixon, Rick Kelly and Jake Dennis in the Castrol liveried car they complete our formidable two-car team.”

“We are delighted to be returning ‘Down Under’ for the GT3 season opener with this fine driver line-up. The last time we competed at Bathurst we achieved a sensational second, the best result ever managed by Aston Martin in this famous event. The 12-hour race in Australia is one of the most important GT3 endurance races in the world, and achieving a top result in the classic at Mount Panorama is sure to be a big challenge for us again.”

The Bathurst 12 Hours was first staged in 1991. After a temporary switch of venue to the Eastern Creek Raceway in 1995, the event was revived in 2007 at the Mount Panorama Circuit. Since the 2011 season, GT racing cars have been regularly entered for the 12-hour race on this 6.21 km track.

R-Motorsport is not only active in racing. The Swiss company is the motorsport brand of AF Racing (Switzerland) AG which, together with Aston Martin Lagonda Ltd and Red Bull Advanced Technologies, is one of the strategic partners in the Aston Martin Valkyrie hyper-sports car project. R-Motorsports is also part of the so-called R-Universe, a group of companies which besides R-Motorsport comprises R-Experience, R-Service und R-Reforged. These companies have only one aim, that is to provide the customer with an exceptional service and to create outstanding cars of strictly limited numbers.