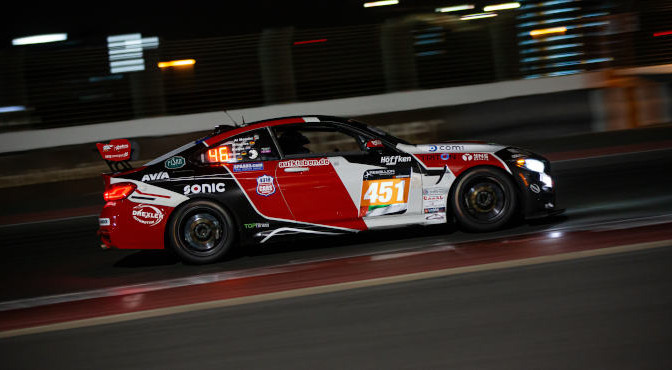 The Spaniard perfectly worked together with Sorg Rennsport-run BMW M4 GT4 and teaming up with Björn Simon, Stephen Epp, Paul Sieljes and Ahmed Al Melaihi played a key role in the GT4 class during the 15th edition of the 24 hours of Dubai. They remained in win contention until the race was red-flagged because of thunderstorms. De los Milagros finished fourth in class after seven hours of close racing

José Manuel De los Milagros brought to a positive end his second participation in the Dubai 24 hours, which counted towards the 24H Series – Championship of the Continents. The 15th edition of the curtain-raiser event for the season saw such atypical weather conditions with a huge thunderstorm flooding the circuit at night. However, such difficult weather conditions didn’t prevent an impressive performance delivered by the Sorg Rennsport-entered BMW M4 GT4 delivered by José Manuel de los Milagros, Björn Simon, Stephan Epp, Paul Sieljes and Ahmed Al Melaihi. They all ran like a clockwork during the race.

After Thursday’s qualifying session, in which Sorg Rennsport focused on having a strong pace for the 24-hour event, the race got underway at 15.00PM on Friday. Sieljes made the two opening stints and moved into the top five after two hours. Later, Al Melaihi and Simon rotated through the #451 BMW before the latter handed over to De los Milagros. When the Spaniard kicked off his first stint, rain made an appearance for the very first time. Unlike European circuits, the Dubai Autodrome isn’t well-prepared for heavy rain and conditions quickly worsened. Anyway, De los Milagros posted very competitive lap time and was solidly faster than top drivers such as Masataka Yanagida – a three-time Super GT Champion–, Jon Miller –Pirelli GT4 America Champion-, Rahel Frey – former Audi factory driver in the DTM– or Beitske Visser – BMW factory driver–. After completing an almost 2-hour stint, De los Milagros headed into the pit lane to hand over to Epp. Shortly after, the race was red-flagged after seven hours and seventeen minutes as the circuit was flooded. The race never resumed.

I’m very proud with our performance at the Dubai 24 hours. The BMW M4 GT4 car showed to be the benchmark for those endurance events. It is s marvellous car for GT4 class. In the same way, Sorg Rennsport was awesome throughout the race with top professionalism and race conditions management. In my humble opinion, they have no equals in this aspect. Besides, I will want to underline how competitive my teammates Björn, Stephan, Paul and Ahmed, they all are very fast! With those teammates we can win every race and championship entered” explained De los Milagros. He underlined that “if the race wasn’t red-flagged I’m sure we would have been in firm win contention until the end. But the decision was the right one due to circuit flood. We are extremely happy with our speed throughout the race and our goal is continue working for the rest of the season. We expect to have more Spaniards such as Álvaro Fontes joining us for upcoming events.”