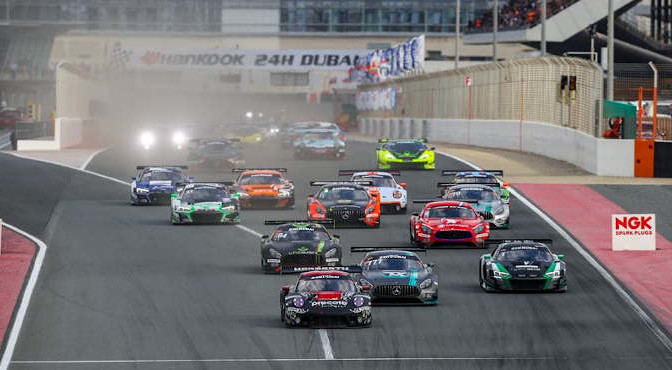 At 15.00 hrs local time, His Highness Sheikh Juma Bin Maktoum Al Maktoum waved the flag of the United Arab Emirates to send the 65-car field underway for the 15th running of the Hankook 24H DUBAI. Once again, the original endurance race in the Gulf region serves as the season opener of the 24H SERIES powered by Hankook and has attracted a packed field of GTs and touring cars featuring teams and drivers from all over the world.

An age-old adage in motorsport says that a race is never won in the first corner, but it seemed that some of the competitors in this year’s Hankook 24H DUBAI must have missed that memo, such was the intensity of the action once the field was released after a pair of formation laps of the 5.390km long track. The Toksport WRT Mercedes-AMG GT3 (#777, Maro Engel / Luca Stolz / Philip Ellis / Patrick Assenheimer / Martin Konrad) started from pole position, but it was the Herberth Motorsport Porsche (#91, Sven Müller / Ralf Bohn / Robert Renauer / Alfred Renauer) that returned from the opening lap as the leader in the field.

Another Porsche, the 911 GT3 R of locally-based team GPX Racing (#24, Dirk Werner / Julien Andlauer / Stuart Hall / Jordan Grogor / Frédéric Fatien) was the first retirement of the race following a crash by Werner in traffic on lap four. The German escaped unscathed. That led to the first code-60 neutralisation of the race, of which there have been three so far. The others were caused by the fun-M Motorsport BMW M240i Racing Cup (#302, Vincent Piemonte / Oscar Jackson / Recep Sari / Eric Zimmermann / Gustavo Xavier) and the Ciceley Motorsport Mercedes-AMG GT4 (#462, Adam Morgan / Katarina Kyvalova / Jake Giddings / Jack Butel / Jon Minshaw).

Activities can be followed on the series’ website www.24hseries.com with live timing and streaming with commentary from the Radio Show Limited team, well-known from IMSA Radio and Radio Le Mans. The stream is also available on the series’ YouTube channel and Facebook page as well as motortrend on Demand. Regular updates are also available on Facebook, Twitter and Instagram. Further information can be found at: www.24hseries.com.