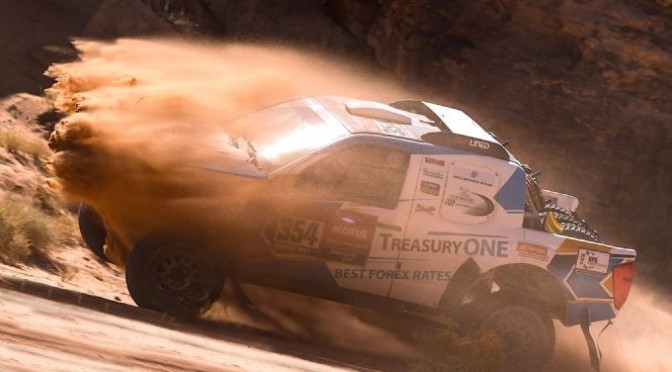 Dakar 2020 delivered perhaps its least controversial day yet as overall car and bike leaders Carlos Sainz and Ricky Brabec consolidated their overall leads with Sainz and Toby Price taking the wins on a sandy and grassy 353km run to Ha’il on Wednesday, although there were still more than enough punctures to go round once again. It was a good day for the Southern African competitors, with a double podium in the Side by Side class, while bike ace Ross branch and car hero Giniel de Villiers also enjoyed solid days to fortify their main race positions.

It was however a very good day for Southern Africa in the Side by Side class as French multiple motorcycle winner Cyril Despres finally came to grips with his OT3 to come from behind and win the day aided and abetted by notes man, South African Michael Horn. The day was made that much sweeter for SA fans when Zimbabwean Conrad Rautenbach came home third to complete the podium in his PH Zephyr behind Pole Aron Domzala. That trio swapped places throughout as each fought back up the overall rankings led by the consistent Russian Sergei Kariakin and US driver Casey Currie.

Cars – Senior in Charge
In the car race, overall leader and double world rally and Dakar champion, Spaniard Carlos Sainz Senior (Mini) extended his Dakar 2020 advantage with another stage win on Thursday as he fended off closet challenger on the day and in the main race, 2019 winner Nasser Al Attiyah and his SA Gazoo Toyota Hilux. France’s Mr Dakar, Stephane Peterhansel was third in the second Mini buggy with local hero Yazeed Al Rajhi (Hilux) fourth from Argentine Orlando Terranova (Mini) in a top 5 for the day that perfectly reflects the overall standings in the car class.

Botswana’s latest Dakar hero, Ross Branch was once again the first privateer home in seventh after a steady day on his KTM. Kirsten Landman was the next Southern African rider home in 70th with fellow SA lady racer Taye Perry 11 minutes behind her in 74th, no assistance rider Stuart Gregory 86th and Zimbabwe’s Graeme Sharp 92nd.

Overall Brabec leads Price by 9 minutes with Benavides and Quintanilla next up, while Monday’s winner Branch made good progress to move up four more places to 14th after his painful tumble on Tuesday. One of the race favourites, Sam Sunderland crashed out on Thursday to join fellow bikers Xavier de Soultrait, Ivan Jakeš and Daniel Albero Puig, all of whom withdrew on Wednesday.

Dakar 2020 is only just starting to warm up — Friday ends the first week of Dakar with a 477km race up to Saudi capital Riyadh for the the rest on Saturday. This daily Dakar Report is brought to you by Motorsport Media courtesy of TreasuryOne Motorsport and Red-Lined Motoring Adventures.