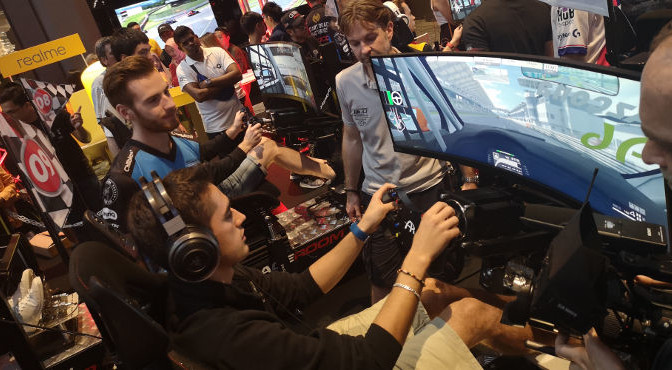 He was second at a virtual Hungaroring, runner-up at a virtual Slovakia Ring and P2 at a virtual Sepang International Circuit to top the rankings that featured 13 of the world’s best online racers.

With sponsorship from KW Suspensions, organisers RaceRoom installed 13 3Motion Simulators at The RIFT gaming centre in Malaysia for the live showdown.

Although he did not win a race in his CUPRA TCR, Brzezinski’s consistency paid dividends with David Nagy (M1RA Esports) finishing third behind Wisniewski.

“I didn’t really expect that, I am just amazed,” Brzezinski said following his triumph in Malaysia. “I felt really at home, I had the pace and everything just fell together. Some guys were coming and going, quick on one track, a bit slower on the others, but I was able to have the pace on every single track. Consistency was the key.”

Andika Rama Maulana takes shock Hungaroring win
Indonesian’s Andika Rama Maulana began the live final in style with what was considered a shock win in his GT-Sim.ID eSport Honda. He completed several overtakes to beat Kuba Brzezinski and Nikodem Wisniewski to the top of the podium.

David Nagy takes Sepang showdown
Bence Bánki started from pole but any hopes the attacking Andika Rama Maulana had of taking the lead ended when he collided with the Slovakia-based Hungarian. That let Nagy into the lead, chased by Kuba Brzezinski with the top-two order remaining unchanged. Briton Jack Keithley enjoyed his best run of the evening in P3 with Bánki and Maulana rounding out the top five ahead of Germany’s Moritz Löhner and Keithley.

Online champion Baldi out of luck in Malaysia
Florian Hasse (Germany) and Gergo Baldi (Hungary), the 2019 Esports WTCR OSCARO online champion, were among the drivers affected by technical issues and finished eighth and ninth in the final order respectively. The RaceRoom eRacing Team Russland duo, Egor Ogorodnikov and Kirill Antonov, impressed with their strong pace in P10 and P11 respectively, while local hero Ayman Aqeem just managed to get ahead of Argentina’s Emanuel Lopez after a strong performance in the Sepang race.

Brzezinski targets 2020 Esports WTCR action
Kuba Brzezinski wants to return to Esports WTCR in 2020 – in order to defend the live final title. Part of the Williams Esports team, the Pole delivered a masterclass in consistency to top the final table, eight points ahead of compatriot and team-mate Nikodem Wisniewski. Speaking during the WTCR Race of Malaysia event at the Sepang International Circuit, where he was invited to take part in the Race 1 podium ceremony the day after his title triumph, Brzezinski said: “Esports is so big right now that I would be happy if I could do Esports WTCR again, that would be great.”