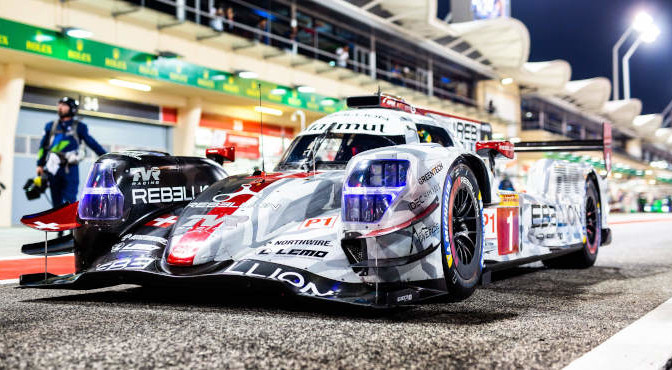 The fourth round of the FIA WEC season took place at the Bahrain International Circuit. After the victory at the 4 Hours of Shanghai last November, the Swiss Team expected to end well the year.
Friday December 13th, Bruno Senna and Norman Nato achieved the Team’s second pole position in a row this season (1:42.979). After starting the qualifying session, the Brazilian driver was the first to take the wheel of the REBELLION R-13 N. 1 for the 8 Hours of Bahrain. Starting from the first position on the starting grid and intending to defend his precious place, a competitor hit the car at the second corner, causing a spin. The Brazilian driver started to climb from 23rd place. After one lap, the car had already moved up ten positions in the standings. After 40 minutes of racing, the REBELLION R-13 car was third after overtaking the Toyota Hybrid car N. 8.
Gustavo Menezes entered the track P3 at 1:25 of racing. After 2:30, an incident considerably slowed down the pace on the track. The car entered the box due to a gearbox problem. It came out of the pit lane almost 6 minutes later in twelfth position in the general classification. Like his teammate at the beginning of the race, the American driver gave everything to move up the rankings. After three hours of racing, REBELLION Racing was P5.
Norman Nato entered the track at 3:50 race. The French kept the pace to find the first positions in the general classification. After 4h30 of racing, the car was in third position.
Bruno Senna was back at the wheel in sixth hour. He maintained an excellent pace and crossed the finish line of the 8 Hours of Bahrain in third position overall. Despite two issues, Team REBELLION Racing achieved a very high level race.

The whole REBELLION Racing Team wishes you a Happy Holidays! See you next year !

“Frustrating race, we had so much potential. The incident at the beginning of the race was obviously not something expected but we were still strong in terms of pace and we could fight for the win. Unfortunately, the gearbox prevented us from precious time. The car had a very good pace even if the track was not favorable. Looking forward to Austin where the Performance Handicap will help us!”

Bruno Senna, R-13 N. 1 driver
“We started the weekend very well with good free practice sessions. We managed to achieve the pole position with only one set of new tires. It was a risky strategy but it finally paid off. In the race, the incident at turn 2 certainly did not help us and the mechanical problem made us lose two laps on the Toyota cars. Overall it remains a very positive weekend, we had the pace for the win. We have made further progress from Shanghai, this is another positive weekend for the Team!”

Classification – 8 Hours of Bahrain 2019
1. Toyota Gazoo Racing N.7 (1:45.374)
JM. Lopez, K. Kobayashi, M. Conway
2. Toyota Gazoo Racing N.8 (1:45.894)
B. Hartley, S. Buemi, K. Nakajima
3. REBELLION Racing N.1 (1:45.260)
B. Senna, G. Menezes, N. Nato
Louis Delétraz on Rookie Test
On Sunday December 15th, Swiss driver Louis Delétraz took part in the Rookie Test Day in Bahrain. He shared his driving time on the REBELLION R-13 car with Norman Nato.
“I am very happy to start in LMP1 during the Rookie Tests in Bahrain with REBELLION Racing. It will be the first time that I will sit behind the wheel of a prototype and I could not have asked for more to take my first steps in endurance racing. I really look forward to working with the Team and thank REBELLION for this great opportunity and their confidence.”