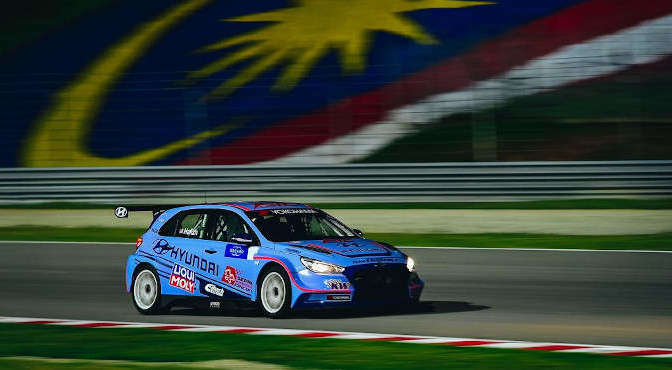 Malaysian MotoGP rider Hafizh Syahrin has completed his first running in the Hyundai i30 N TCR he will use to make his debut in the WTCR – FIA World Touring Car Cup presented by OSCARO at the Sepang International Circuit later this week.

A car-racing novice, Syahrin was in action during wildcard testing under the track’s newly-installed floodlights on Monday evening and again on Tuesday morning as he prepares to compete in both events that make up the inaugural Races of Malaysia weekend, namely WTCR Race of Malaysia and the 8 Hours of Sepang, a round of the FIM Endurance World Championship for motorbikes.

Speaking following his first stint behind the wheel of his Hyundai Team Engstler-run car, Syahrin said: “There are still some places I can improve and I will check with my crew chief to see which parts we lose on the track but it was amazing, a nice experience for me and also we tested in the night. As we have one race in the night, Race 3, it’s a good opportunity that we have a test here. At the same time, we have 20 kilos more in the car [in accordance with the wildcard regulations] so it’s not easy but I will try to improve step by step.”

Of his upcoming double-header bid, a challenge that’s never been attempted before in two world series on the same weekend, Syahrin added: “I cannot wait to arrive in a good shape on the weekend to jump on the bike and suddenly jump in the car, this will be complicated but I will try to build my confidence, keep calm and make sure everything is under control.”

Hyundai Team Engstler’s Sport and Marketing Director, Kurt Treml, said: “We are very proud to be here with the local wildcard drivers as entrusted by Sepang International Circuit. I am sure that we can support the drivers with our experience of the Hyundai i30 N TCR. We have worked with Mitchell Cheah for two years now in Asia and Europe so we know how to work together well. For Hafizh it is his first time and he jumps straight into the highest touring car series in the world, a task for him, so we will do our best to get good results for the two drivers for home pride.”