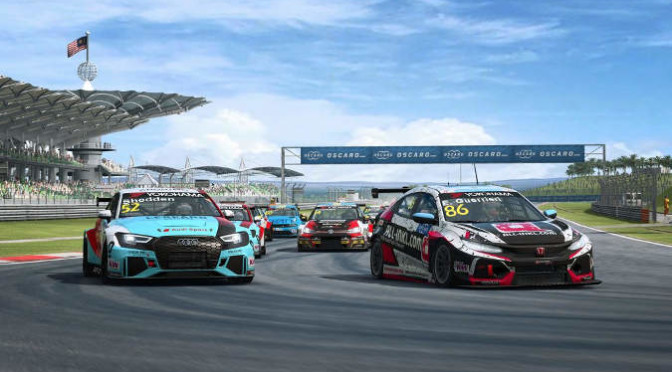 While four drivers will face off for the 2019 WTCR – FIA World Touring Car Cup presented by OSCARO in Malaysia this weekend, 13 of the fastest simracers on the planet will do battle for the online equivalent in the country on Saturday evening (14 December).

The KW Suspensions-sponsored live final of Esports WTCR OSCARO at The RIFT in Kuala Lumpur pitches together the top eight from the seven-event online multiplayer championship, plus a further five who have made it through via local-level qualifiers and events.

They will compete for the major simracing title from RaceRoom and a share of the €25,000 pot, a portion of which has been provided to the simracers to cover travel and accommodation costs.

Here is a reminder of the 13 finalists:

The swift head to THE RIFT
One of Malaysia’s largest virtual reality and augmented reality gaming centres will host the Esports WTCR OSCARO final. The RIFT, located within the Mid Valley Megamall, which appears on the list of the world’s biggest shopping centres, has partnered with Esports WTCR OSCARO organiser RaceRoom to provide an exciting, state-of-the-art venue.

Each of the 13 finalists will be allocated a brand-new TrackTime 3Motion simulator, equipped with the most high-end equipment in simracing, including an Ascher steering wheel with Simucube, Heusinkveld pedals and widescreen monitors, plus the hugely-popular RaceRoom simulation.

Visitors to the mall will be able to watch the action from 16h00-21h00 local time, with seating and a giant video screen available inside The RIFT. They can also try out the RaceRoom Esports WTCR OSCARO simulation. Admission is free.

Finalists make their car selections
Gergo Baldi (M1RA Esports) continues in the virtual Hyundai i30 N TCR he used to win the Esports WTCR OSCARO online title earlier this year. But while the Hungarian’s car choice is hardly a surprise given his 2019 success, his team-mate and fellow Hungarian David Nagy has opted for an Audi RS 3 LMS for the final, the car of choice for Poland’s Nikodem Wisniewski (Williams Esports). Nagy’s switch from Hyundai power means only Baldi and Russia’s Kirill Antonov (RRT Russland) will fly the Korean make’s flag in Malaysia.

Real WTCR / OSCARO drivers also in action
Niels Langeveld (Audi Sport Team Comtoyou) starts as the favourite to win the WTCR VIP race, which will take place at The RIFT ahead of the live final from 16h00 CET on 14 December. The Dutchman was one of the strongest guest performers of the Esports WTCR OSCARO online championship, making it onto the first server for the Macau round and regularly matching the times of the leading Esports drivers. Strong opposition comes in the shape of real-life WTCR / OSCARO title contender Esteban Guerrieri (ALL-INKL.COM Münnich Motorsport), plus Mikel Azcona, Kevin Ceccon and Yann Ehrlacher.

How to watch?
With James Kirk providing his usual expert commentary there will be live streaming of the Esports WTCR OSCARO Kuala Lumpur final from 08h00-13h00 GMT (16h00-21h00 local time) via the following channels:

Baldi won the Esports WTCR OSCARO online title earlier this season and holds Michelisz, who started his career in simracing, in high regard.

“I’m super-excited to take part in the offline final of Esports WTCR OSCARO, on the same weekend and in the same country as the real drivers,” said Baldi. “The trip is already a once-in-a-lifetime adventure, especially with the opportunity to see Norbi fighting for the title. Regarding the chances for our races, I don’t see myself as the favourite, despite the online title. It will be a different story with the fixed set-ups, and the new equipment, so I just want to be as prepared for the conditions as I possibly can, and then I will try to bring out the maximum from the package. It will be unbelievably close, so I’m sure it will be a great show to watch.”