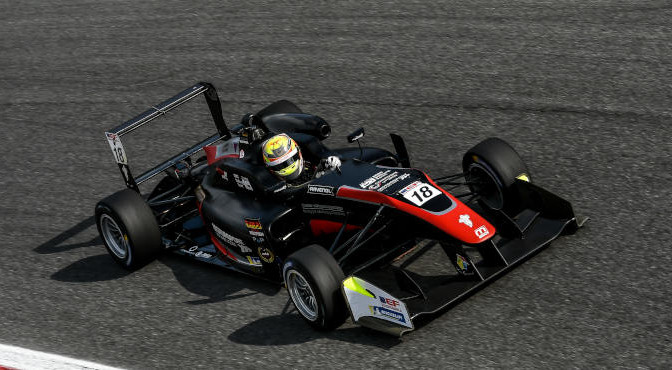 Season 2 in formula racing for Niklas Krütten: The 17-year-old from Trier built on experience gained in year one to further progress his performance. He has two overall victories and no fewer than seven podium finishes to show for his Formula 4 campaigns in 2019. With his switch to a Formula 3 car half way through the year, Krütten took the next important step in his career. As the only single-seater junior sponsored by the ADAC Sports Foundation, he impressed by virtue of strong pace, great starts and spectacular wheel-to-wheel action. With his indomitable spirit, he always got the best out of difficult starting situations. No wonder that Krütten has had his ADAC Sports Foundation sponsorship renewed for next year.

Emirates calling: The motorsport year began for Krütten with Formula 4 racing in the Dubai Autodrome. He took his leave of BWT Mücke Motorsport after the fifth round of the 2019 Formula 4 UAE with a win and a fastest race lap.

ADAC Formula 4: Krütten could hardly have got his second campaign in the German ADAC Formula 4 off to a better start, lifting a winner’s trophy on the opening weekend at Motorsport Arena Oschersleben. On his next outing at the Red Bull Ring, he narrowly missed out on victory number two. The Van Amersfoort Racing driver scored points in every race that he completed. During the standout weekend of the season at the Hockenheimring, where the junior series shared the billing with Formula 1, Krütten met Ferrari star Charles Leclerc and was a guest in the Scuderia garage.

Second year: Krütten also contested the first four weekends of the Italian Formula 4 series as a member of the Van Amersfoort Racing squad, competing at two Formula 1 circuits – the Hungaroring and Red Bull Ring – on the MotoGP circuit at Misano and in the Autodromo Vallelunga Piero Taruffi. He made four podium appearances and booked one pole position.

Open, Euroformula Open: The next stop in the career of the talented youngster was the Euroformula Open. In August, Krütten parted company with the Formula 4 elite to join Team Motopark and contest his first six races in Formula 3. His itinerary took him to three Formula 1 racetracks – Silverstone, the Autodromo Nazionale di Monza and the Circuit de Barcelona-Catalunya. As well as gaining valuable experience, he twice made it into the Top Five of the rookie classification.

National squad: In early November, Krütten was selected to represent his country in the FIA World Motorsport Games. As the official DMSB nominee, he competed against 19 drivers from other nations in the Formula 4 Cup. This was his first time out in a formula car with hybrid drive and cockpit halo. In an exciting race at Autodromo Vallelunga Piero Taruffi, Krütten won silver, which was the only medal for Germany on this occasion. He also brought home the Pirelli Speed Hero Trophy for the fastest race lap.