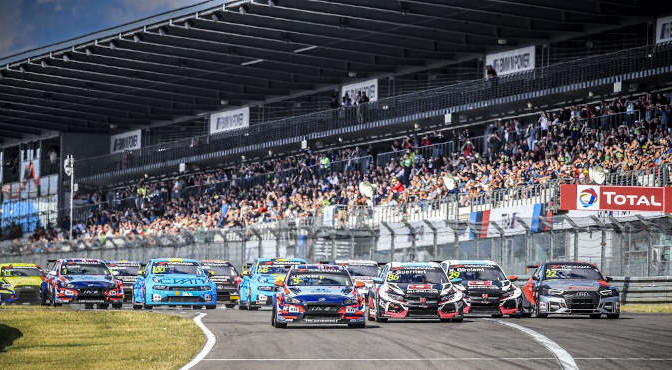 The WTCR – FIA World Touring Car Cup continues to go from strength to strength with confirmation of a 10-event calendar featuring two new destinations, plus a revision to the compensation weight rule designed to spice up the racing.

At its meeting in Paris yesterday (4 December), the FIA World Motor Sport Council gave the green light to the additions of South Korea and Spain on the 2020 schedule and rubber-stamped the tweaked Sporting Regulations that had been previously approved by the FIA Touring Car Commission.

Meanwhile, the Council approved the extension of the WTCR promoter agreement between Eurosport Events and the FIA by three years to include the 2020-2022 seasons.

New entry South Korea strengthens WTCR’s ties with Asia
The Inje Speedium circuit, located 160 kilometres north east of Seoul, is the venue for the first WTCR Race of South Korea from 16-18 October. Gabriele Tarquini, who won the inaugural WTCR title driving a Hyundai i30 N TCR said: “It’s a very nice track, enjoyable with up and down sections, a bit like a small version of the Mugello circuit in Italy. When I drove there, it was complicated to find the line and this made it a good challenge. It will be good for our category of racing.”

Spain gets ready for first WTCR appearance
MotorLand Aragón was announced as a WTCR venue back in September, will host WTCR Race of Spain from 3-5 July. Event-winning Spanish CUPRA-powered WTCR racer and top rookie Mikel Azcona is a big fan. He said: “You can have a lot of overtakes and battles. It will be really fun for the spectators.”

Legendary Nürburgring Nordschleife to host the action earlier than in 2019
As well as new tracks, there’s a tweak to the event order for 2020 with WTCR Race of Germany, at the ultra-demanding Nürburgring Nordschleife, moving forward by one month from June to May (20-23), albeit once again coinciding with the ADAC 24h-Rennen week, which regularly attracts in excess of 200,000 fans. The dates of the events in Slovakia, Portugal and China are also earlier than in 2019.

TWEAK TO KEY WEIGHT RULE AND ROOKIE CLASSIFICATION
The FIA Sporting Regulations for the 2020 season have undergone a few adjustments as follows:

The changes to the Sporting Regulations have been made to discourage teams – in tandem with customer racing brand engineers – from instructing drivers to effectively set slower race lap times to help limit the amount of additional weight added to their cars for the subsequent race weekend. The intended result is better racing as drivers will push on each lap to try to gain position, rather than driving with a compensation weight strategy in mind. The compensation weight calculations will be more accurate, fluctuate less and be close to the actual performance of each car in reality.

Rookie classification to showcase new talent
Drivers 23 and under on 1 January 2020 who have participated in no more than three WTCR events will be included in the new rookie classification, which has been introduced to recognise the achievements of young racers in WTCR.

Can you sum up the changes to the Sporting Regulations and the benefits they will deliver?
“When you have a successful product like we do with WTCR, it’s important to avoid making wholesale changes, only adjustments to further improve the show. Including qualifying lap times only in the compensation weight calculations is the best possible decision for WTCR and the fans watching the racing. For too long we’ve seen engineers on the pit wall focusing on lap-time management and scratching their heads over their live radio communication with drivers. I am thankful to the FIA for sharing this opinion.”

What’s the thinking behind the rookie classification?
“Right from the start of WTCR, one of our continued aims has been to attract young guns to take on established professionals, which will be the case well into the future. There’s an increasing number of young talents coming through the ranks in touring car racing and it’s important WTCR is accessible for the most talented of them.”

Why South Korea, why no Japan?
“We welcome South Korea and Inje Speedium to the WTCR family. Once again, we have included four events in Asia to acknowledge the region’s considerable importance to the WTCR. While the 2020 calendar will not include an event at Suzuka, our long-term partnership with Mobilityland, the local promoter in Japan, remains firmly in place to bring another series to Suzuka in the future.”

WTCR HEADS EARLY TO ARAGÓN
As well as hosting the inaugural WTCR Race of Spain from 3-5 July, MotorLand Aragón will be the setting of the official pre-season test from 24-26 March. Additional activities to coincide with this event will be announced in due course.

WTCR 2020: THE EVENTS IN 100 WORDS
Need to know your Circuit Moulay El Hassan from your Turn 2 at Slovakia Ring? Check out the WTCR 2020 event guide below.

Transformed from street circuit to semi-permanent race track for 2016, Circuit Moulay El Hassan is located in the heart of Marrakech’s bustling hotel district. Built to FIA Grade II safety standards, the layout is the work of Hermann Tilke’s renowned architecture agency and offers impressive views of the Atlas Mountains and Marrakech city wall. But with a compact lap of 2.971 kilometres (down from 4.545km previously) and a sprinkling of tight, wall-lined turns, there is no time for WTCR drivers to take in the scenery, which was certainly the case when Marrakech hosted the inaugural WTCR event in April 2018.

Located less than 20 kilometres northeast of Budapest, the Hungaroring is famed for hosting the first Formula One grand prix behind the old Iron Curtain in 1986. Ever-present on the F1 calendar since, the Hungaroring has also become a popular venue for World Touring Car racing, particularly since the emergence of Norbert Michelisz as a local hero and especially following his pole-to-flag victory in 2015. Resurfaced for 2016 with re-profiled kerbing to boot, the track blends tight turns and fast sweeps while its valley location makes for an initial descent before a climb back up to the high-speed Turn 4.

Germany’s WTCR host venue offers a challenge like no other with its daunting 25.378-kilometre lap, 64 heart-stopping corners and changeable Eifel mountains weather. Opening for business in 1927 and a German Grand Prix regular until Niki Lauda’s near-fatal accident in 1976, the Nürburgring Nordschleife joined the FIA World Touring Car Championship schedule from 2015-2017 as part of the ADAC Zurich 24h Rennen weekend. The WTCR took over in 2018 and delivered even more action with Yvan Muller, Esteban Guerrieri and Thed Björk sharing the wins. Guerrieri was a winner again in 2019 along Johan Kristoffersson and home hero Benjamin Leuchter.

Opened in 2010 and located 40 kilometres east of the capital Bratislava, Slovakia Ring hosted the FIA World Touring Car Championship five times from 2012. Its challenging nature, speed variations, elevations and array of corner configurations makes it popular among drivers and fans with tens of thousands attending each season. Described by inaugural WTCR champion Gabriele Tarquini as “one of the best tracks in Europe”, the 200kph Turn 2 right-hander requires serious commitment. Néstor Girolami, Frédéric Vervisch and Ma Qing Hua were the winners in 2019. As in 2018, the event features action from the FIA European Truck Racing Championship.

A street circuit oozing history and intrigue, racing has taken place on Vila Real’s demanding hillside roads since 1931, when Gaspar Sameiro and Ercilio Barbosa conquered the original 7.150-kilometre course in a Ford Model A. Safety and financial factors meant races were held on an irregular basis until the WTCC’s arrival in 2015 provided stability and Vila Real’s first world championship-level event. The 4.785-kilometre layout now used is a challenging blend of fast turns, climbs and descents. While a handful of chicanes were installed for safety reasons, the spectacle remains unaltered with speeds exceeding 200kph on the final downhill section.

MotorLand Aragón, close to Alcañiz in the north east of the country, will host the inaugural WTCR Race of Spain in 2020. Despite huge enthusiasm for the city-based Circuito Guadalope from 1965, growing safety requirements and difficulties staging top-level events meant time was called on racing through the streets in 2003, which led to the MotorLand Aragón project being conceived. Former F1 driver Pedro de la Rosa collaborated with renowned circuit designer Hermann Tilke on the track layout, which was inaugurated in September 2009 and has staged the Gran Premio de Aragón de MotoGP since 2010, regularly attracting 100,000 fans.

Located in Chunxiao in the rapidly-expanding Beilun coastal development near Ningbo – a major port and industrial city with a population of more than seven million – in Zhejiang province, the track opened in time for WTCC Race of China in October 2017 following more than a year of construction work at a cost of 950-million CNY (122 million euros). Around 500 people were involved in turning what was a disused quarry into a state-of-the-art venue, which is built to FIA and FIM Grade 2 standards. It runs in an anti-clockwise direction, is between 12-18 metres in width and features 21 turns.

Penned by Alan Wilson, the same architect behind Ningbo International Speedpark, the 21-corner Inje Speedium is the venue of the first WTCR Race of South Korea. The track was completed in 2013 following a three-year build and includes several elevation changes, high- and low-speed corners, plus impressive facilities such as an on-site hotel and apartment complex. Located in South Korea’s Kangwon-do region, Inje Speedium is 160 kilometres north east of the capital Seoul. Built to FIA Grade 2 standards, it hosted a round of the TCR Korea Touring Car Series in 2018. Eventual champion Charlie Kang won the first race.

Macau’s 6.120-kilometre Circuito da Guia blends twisty turns and narrow blasts with long, wide-open straights and sweeping corners – plus gradient changes – to create one of the most challenging and spectacular street circuits on the planet. Touring car races have been run in this Special Administrative Region of the People’s Republic of China for more than half a century, with the famous Guia Race first run in 1972. Having welcomed back the WTCC in 2017 when Rob Huff bagged a record ninth win, Macau hosted the thrilling seven-way inaugural WTCR season showdown in November 2018 when Gabriele Tarquini took the title.

Home of the Malaysian Formula One Grand Prix from 1999-2017, the Sepang International Circuit hosts the 2019 WTCR / OSCARO super-finale as part of the Races of Malaysia double-header with the FIM Endurance World Championship for motorbikes. The event will run to a unique format with all three races taking place on the same day in late afternoon, at dusk and at night under floodlights. Sepang’s 5.543-kilometre lap features two long straights to aid overtaking, plus a variety of medium and high-speed corners. And with the track untried by the bulk of the drivers an exciting spectacle is in store.