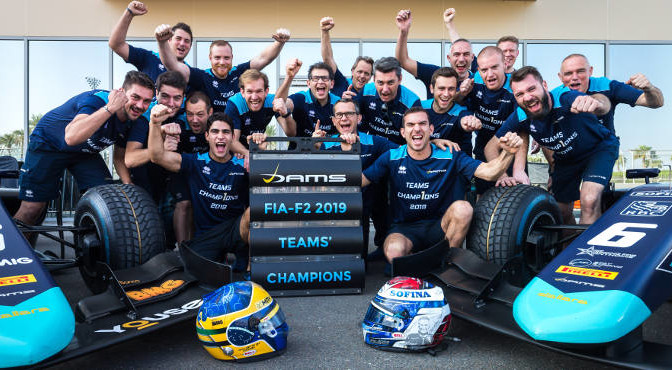 Sergio Sette Camara took the final Feature Race win of the 2019 FIA Formula 2 season from pole position under the floodlights in Abu Dhabi, sealing the teams’ championship for DAMS which the French squad has dedicated to its late founder Jean-Paul Driot. Formula 1-bound Nicholas Latifi led a double podium finish for the Le Mans-based outfit in the Sprint Race.

“Fastest in practice, quali and won the Feature Race.”
“We were fastest in free practice and qualifying, and we had a good car for Saturday so I took my first Feature Race win. We progressed well from eighth on Sunday too, coming through the field to take a podium so it’s been a really strong weekend. I’m very happy with the teams’ title and I almost challenged Luca Ghiotto and Nicky for a higher position in the drivers’ championship but it just was not enough.”

“I wish Jean-Paul was here to celebrate with us.”
“Coming into this weekend we had two big objectives: take the teams’ title and secure my vice champion position in the drivers’ standings so we’re extremely happy to do both. I got unlucky in qualifying with a yellow flag during my final lap, so we should have been higher up, but I was happy with my performance in the Feature Race. Sergio had priority for the pit stop because he was ahead so I lost some time and seventh was the best I could manage having come through the field. I hoped for a clean Sprint Race and I did just that to take second. This marks the end of my time in F2, and with DAMS after four years. Nothing could make me happier than playing a part in rewarding them with the teams’ championship in my final season. I wish Jean-Paul was here to see it and celebrate with us all. This one is for him and all the guys, they deserve it.”