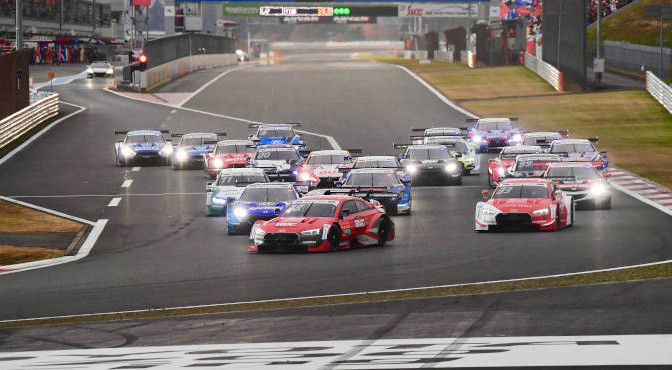 These four cars set the pace at the front until a number of Safety Car periods began to ramp up the pressure, finally causing a series of frantic, multi-car accidents that slimmed down the field and resulted in a nail-biting single-lap charge to the chequered flag.

The first two Safety Car periods were called in order to clear debris resulting from left-rear punctures to Duval and René Rast (Audi RS 5 DTM) – possibly as a result of running a sub-optimal set-up following a lack of dry running this weekend, according to Head of Audi Motorsport Dieter Gass.

At the second restart, two multiple-car accidents took out several SUPER GT runners, including frontrunners Tsukakoshi and Nakajima. A third Safety Car was then called out to clear the increasing amount of carbon-fibre debris left scattered across the racetrack, and to remove James Rossiter’s CALSONIC IMPUL Nissan GT-R, which had rolled to a halt at the first corner with heavy accident damage.

If Karthikeyan was able to successfully manage the pace at the front, it grew increasingly unruly behind him: on the very last lap, Duval and Wittmann scrapped mightily for second, switching positions several times. The Frenchman only took runner-up spot on the chase to the finish line – but was then penalised one second for nudging Wittmann a couple of corners earlier. The top three was separated by just 0.935s, with the German earning second place – appropriately enough on his birthday.

Behind the top three, Yamamoto came home fourth from Kamui Kobayashi (BMW M4 DTM), who drove a hugely spirited race to fifth – on his debut weekend in a DTM car.

After his heartbreaking exit on Saturday before even taking the start, Duval triumphed during Sunday morning’s qualifying session, earning second but taking pole following a grid penalty for the fastest car. Daisuke Nakajima had initially set the quickest lap, but a five-place penalty (for changing the monocoque following a massive practice shunt for team-mate Hideki Mutoh on Friday) meant the Japanese racer would start his final SUPER GT race from sixth. The 30-year-old announced his retirement today.

» Quotes – race 2, Dream Race, Fuji Speedway
“When I walked out onto the Fuji grid before Saturday’s very first Dream Race, the realisation of what ourselves and GTA had achieved really struck me. Seeing five world-class manufacturers on the grid, understanding that we had brought two racing worlds together – after seven years’ hard work – was quite an emotional moment. Furthermore, I could also see that the unification of our two series is clearly the right idea for us. We are heading in the right direction with this common approach. Of course, there’s lots more work to do – but I hope we can learn from this weekend, take our experiences home, work out how to improve, and keep continuing along this path. I see a big future in this kind of racing.”
Gerhard Berger, Chairman ITR e. V.
“Our car immediately felt good on the Hankook tyres, so we thought we’d have a chance to fight at the front. Still, it was fantastic to find we were quick in all conditions – to win the race was just a dream come true. Having this joint race between SUPER GT and DTM has been very special – the DTM drivers are fantastic – so this was fantastic exposure for both series.”
Narain Karthikeyan, winner
“This feels great. Until today, the weekend had been quite difficult for us – we struggled quite a lot on Friday and Saturday; and were a bit unlucky with our strategy yesterday. But today it all went to plan, especially coming through from seventh. It was an action-packed race – really good fun – and a great show and good entertainment for the spectators. That last lap was really special – even in DTM we don’t see those sorts of fights too often. Fighting with Loïc was really, really good fun: I knew he was on fresher tyres, but I was going to defend like hell to keep second place. It was a good fight, the last three corners particularly, which is what everyone wanted to see. I think everyone enjoyed today.”
Marco Wittmann, 2nd place
“Today was better than yesterday! I knew the SUPER GT cars were a bit quicker than us in terms of pace, so I didn’t fight too hard against them at the beginning of the race. Then I got my puncture, at Turn Four, which cost me a lot of time. But due to the Safety Car, I could make my way back up the order – at the last Indy restart I was 13th, with about eight laps to go, it was great fun. Then, on the last lap, I knew I had fresher tyres; nobody’s here to finish second or third, so I went for the win, trying as hard as possible to make it happen. It was a cool race; a really cool last lap – it was a shame to get a penalty, but I was trying everything to get ahead. In the end, we did what we came here for – so, second or third doesn’t really matter. We achieved our target – we had a fantastic time and everyone really enjoyed it.”
Loïc Duval, 3rd place
» Results – race 2, Dream Race, Fuji Speedway
01 Narain Karthikeyan (IND), Honda NSX-GT, 31 laps in 57m 38.362s
02 Marco Wittmann (GER), BMW M4 DTM, + 0.935s
03 Loïc Duval (FRA), Audi RS 5 DTM DTM, + 1.825s
04 Naoki Yamamoto (JPN), Honda NSX-GT, + 3.412s
05 Kamui Kobayashi (JPN), BMW M4 DTM, + 3.743s
06 Daisuke Nakajima (JPN), Honda NSX-GT, + 4.356s
07 Mike Rockenfeller (GER), Audi RS 5 DTM, + 4.536s
08 Ryo Hirakawa (JPN), Lexus LC500, + 4.681s
09 René Rast (GER), Audi RS 5 DTM, + 5.624s
10 Benoît Tréluyer (FRA), Audi RS 5 DTM, + 7.226s