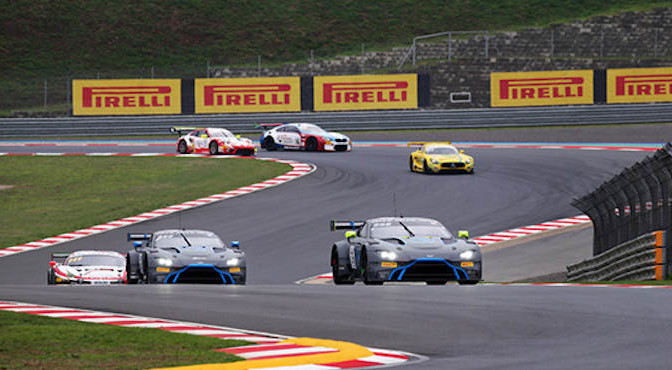 The final race of the year also turned out to be one of the most spectacular for R-Motorsport in 2019. The southern hemisphere summer temperatures gave way to torrential rains that made the Kyalami 9 Hour in South Africa a daunting challenge. Despite the difficult conditions, both of the cars entered by the team from Niederwil (Switzerland) saw the chequered flag, finishing tenth and 14th respectively.

The charge through the field mounted by Ricky Collard, Hugo de Sadeleer and Marvin Kirchhöfer was one of the highlights of the weekend. Although the trio manged only a modest P19 in qualifying, they then went on to impress in the race itself. Consistent lap times and a good strategy enabled the three R-Motorsport drivers to close the gap on the front-runners. After six of the total nine hours, the number 62 Aston Martin Vantage GT3 had advanced to sixth place, at which point the heavens opened over the circuit on the outskirts of Johannesburg.

Unrelenting rain determined the subsequent course of the last three hours of the race, with the safety car leading the field for two of them. This brought progress to an end, as 23-year-old British driver Ricky Collard who took final stint explains: “We had a great pace and were on a perfect strategy. However, with the onset of rain and the safety car, the deck was reshuffled. It got especially interesting 20 minutes before the end when the safety car came in at last. It was a gruelling sprint to the finish in which nobody was doing anyone else any favours.”

Collard, de Sadeleer and Kirchhöfer ultimately took tenth place, which is one of the threesome’s best results in an international endurance race. “In view of our lowly starting position, it’s an outcome we can be satisfied with,” said Kirchhöfer. “A better result would have been nice, because we certainly had the pace for it.”

Maxime Martin, Jake Dennis and newcomer Enaam Ahmed finished the nine-hour race in 14th position. For the trio sharing the cockpit of the number 76 Aston Martin Vantage GT3, the weekend in South Africa was afflicted with a number of setbacks. For example, the grid penalty that deprived them of a promising P7 slot which Jake Dennis had fought for and earned in the pole shootout. Despite tremendous fighting spirit in the race, the three R-Motorsport drivers fell further and further back.

The motorsports spectacle in South Africa also constituted the final fixture of the 2019 Intercontinental GT Challenge, in which R-Motorsport contested three out of five races. The unusual aspect of the Swiss outfit’s campaign is that they fielded the predecessor model, the Aston Martin Vantage V12 GT3, in the season opener at Bathurst in Australia. For the 24 Hours of Spa and Kyalami 9 Hour, the team brought along the new Vantage GT3.

Dr Florian Kamelger: “The race weekend at Kyalami once again placed exceptionally heavy demands on our team, and I would like to thank everyone involved for their commitment. The Intercontinental GT Challenge attracts the world’s driver elite and top teams. The fact that we were there representing the Aston Martin brand makes us very proud. Given the stormy conditions, the tenth place for Marvin, Ricky and Hugo is a good result. Our number 76 car was also capable of finishing in the Top Ten, but they had some bad luck along the way and their strategy was not always optimal for the prevailing conditions. But all in all, it’s been a good end to a season that was important for us.”