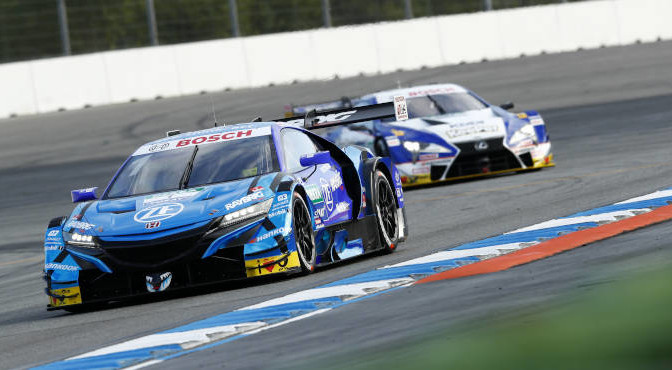 The DTM breaks motorsport boundaries (literally and metaphorically) this weekend by holding its first-ever joint-race with Japan’s SUPER GT championship.

After years of strategic and technical preparatory work, the landmark race weekend will be held at the legendary Fuji Speedway, with two 55-minute-plus-one-lap races; one each on Saturday and Sunday.

After a toe-in-the-water exercise at the Hockenheimring last month (in which three Japanese GT500 cars raced in the DTM finale to gather data for the Fuji ‘Dream Race’), a combined field of 22 cars – seven DTM machines from Audi and BMW, and 15 from Japanese manufacturers Lexus, Honda and Nissan – will take part.

It promises to be a thrilling weekend – one full of uncertainty and intrigue. At Fuji, all cars will run without DRS and P2P, will use Hankook’s control rubber (including the SUPER GT runners, who enjoy a tyre-war in Japan), and each race will begin with a rolling start. The unique layout of Fuji – it has long-radius corners and a mighty 1.475km straight – will also make it harder for the DTM outfits to find a satisfactory balance between straight-line speed and mechanical grip.

Big names all set for Japan

While the DTM drivers will race across both days, the vast majority of the two-driver Japanese squads will field a different driver on each day (the sole exception being Honda’s Naoki Yamamoto, who, in the absence of Jenson Button, will drive on Saturday and Sunday).

» Quotes – Dream Race, Fuji Speedway
“This weekend’s joint-event between DTM and SUPER GT is a landmark achievement. It has been a long-held ambition to jointly host a race together – and it has been many years’ work to realise it. The DTM’s two German brands Audi and BMW will bring to Japan some of their greatest champions – two- time winners Rene´ Rast and Marco Wittmann, as well as Mike Rockenfeller; and racers Loi¨c Duval and Benoi^t Tre´luyer, who each achieved success in Japan during their long and successful careers. In addition, local hero Kamui Kobayashi, and the legendary Alex Zanardi, whose achievements need no introduction, will race for the honour of the German marques. As we write a new chapter in the history of both our series this weekend, I hope we have a safe and successful event, and that everyone enjoys the spectacle, the fun and the thrill that comes from combining our two series together on the racetrack.”
Gerhard Berger, Chairman ITR e. V.
“I’ve never been to Japan before, so I’m looking forward to everything. I spent a day and a half preparing for the simulator on Fuji, as well as watching some videos on YouTube – mostly to get to the racetrack and switch back to racing mode. But there is no pressure: In my opinion, the main thing for us is to enjoy the weekend and to offer the fans a good show. Because of the unique track profile in Fuji, we need to focus on the car’s set-up: on the one hand, we want as much top speed as possible on the long straight; on the other hand, we want as much downforce in all the other areas, especially the last sector. It won’t be easy – especially if you look at the strong field of participants. There are some really very well-known names. Almost everyone has won races and everyone deserves to be in Fuji at the start.”
René Rast, Audi, DTM Champion 2017 & 2019
“It’s really nice that we’re finally going to race the first proper races with the SUPER GT. Since Fuji Speedway is new territory for me, I’ve also been dependent on the simulator and the numerous onboard videos available on YouTube in my preparation. After all, our preparation for the Dream Race is not that different from our normal schedule in DTM, where we had to learn two new racetracks in the past season. The track layout in Fuji looks cool, especially because of the extremely long start-finish straight. There should be high top speeds possible – but whether we can crack the 300 kph mark may also depend a bit on getting a slipstream. It’s great to have Kamui Kobayashi and Alex Zanardi as team-mates – one’s a local hero and the other’s an absolute sports legend. That’s a good mix. Alex knows our DTM car from his guest start last year, even though we did not drive with the new turbo engines back then. I wouldn’t dare to predict the results: While the SUPER GT teams know the racetrack much better than we do, we have much more experience with the Hankook tyres. The important thing is that we deliver a good show and create the basis for more races of this kind in the future.”
Marco Wittmann, BMW, DTM Champion 2014 & 2016