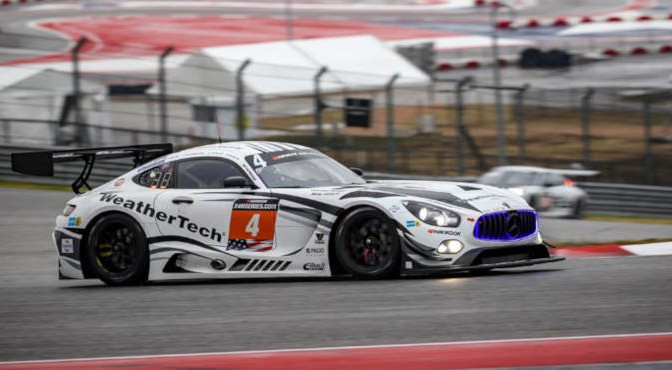 The German team, a former winner of the event, secured pole position at the Circuit of the Americas in Austin, Texas on Friday afternoon, and has thus far completed 278 laps around the 5.513km Formula 1 United States Grand Prix venue after a commanding run. Team Black Falcon will thus lead the field away at tomorrow’s restart, but having suffered a late-race puncture, will be taking no chances in the remaining 13 hours of the event.

“We’re very excited about the way the race has gone, but we’re not even at half-distance yet” Ben Keating told radiolemans.com’s Joe Bradley. “This track has a lot of character with all those bumps, and it’s so hard on the car, harder than it used to be. We’re being really careful and we can’t be too abusive.”

One lap further back, the Toksport WRT Mercedes-AMG GT3 (#90, Luca Stolz / Hendrik Still / Martin Konrad / Axcil Jefferies) will restart alongside its German compatriots on the front row of tomorrow’s grid after a strong run from 3rd on the grid. The sister #70 Mercedes (Nick Foster / Martin Berry / Eric Zang / George Kurtz) had been a strong contender for an overall podium spot early on, but has since fallen back after suffering a major oil leak.