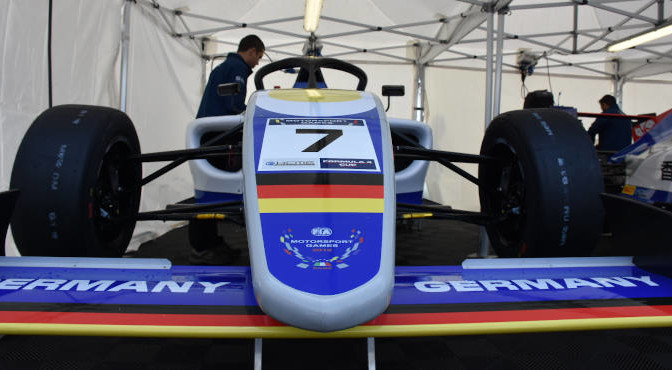 20 different countries, 20 Formula 4 drivers, 3 medals: The objective in the inaugural FIA Motorsport Games was not to hang on to a position or bank as many championship points as possible; from the first practice session on Friday to the main race on Sunday, it was all about winning a medal. Team Germany came in behind Italy and ahead of Finland to claim silver. Niklas Krütten adapted extremely well to the new Formula 4 car with its cockpit halo and hybrid engine to finish second in exceptionally difficult track conditions.

The main race was a real thriller. The capricious weather was a constant factor throughout the race weekend, with track conditions on the 4,085-metre circuit on the outskirts of the Italian capital changing from session to session. The track was still wet at the beginning of the main race, so all of the cars on the grid started on rain tyres. Krütten kept his cool despite the difficult conditions, getting off to a superb start and retaining position. The surface then began to dry out rapidly, which called for skilful tyre management. The 17-year-old conserved his Pirellis, maintaining a fixed gap to the two front-runners whose battle for position accelerated the wear on their tyres.

It was a clever strategy by Krütten who now began to close the gap on the duo ahead. A late safety car deployment briefly interrupted his pursuit, but after the restart, his strategic approach brought the reward of one position gained and a gradually diminishing deficit on the leading Italian. Ultimately, though, it was not quite enough to take the gold medal. Krütten came within 0.7 seconds of the eventual winner, even posting the fastest time of the race on the final lap.

The starting position for this main race had not been ideal. In qualifying on a wet track, Krütten set the fourth-fastest time. He then made a perfect start to the subsequent qualifying race, advancing to second place. In a spectacular overtaking manoeuvre, he then took the lead. But his car then developed a problem with the gearbox, which proved to be a major handicap for the rest of the race. He was lacking top speed, which hurt him badly on the straights where the pursuing bunch were breathing down his neck. Although he was effectively competing with one hand tied behind his back, Krütten respected the rules of fair play and was eventually obliged to let the Italian and the Israeli go past.

Team Germany ultimately failed to set the competition on fire: despite their status as favourites, Krütten was the only member of the squad who brought home a medal.

Niklas, congratulations on your silver medal. How did the all-important main race go from your point of view?
Thank you. Right from the start, my race was a tactical one. I knew the track had already dried out to a certain extent, but in some places, it still wasn’t dry enough to start on slicks. So I let the two leaders pull away initially. By contrast, I opted to go easy on the tyres and not push hard at the beginning. I didn’t see myself as under any pressure from behind.

The safety car should theoretically have played into your hands, shouldn’t it?
Unfortunately not. I had just started to put my foot down and was closing the gap on the two leaders. Consequently, the safety car slowed me down a bit. Despite that, the strategy almost paid off. The safety car came back in with two laps remaining. I overtook second-placed Ido Cohen and then closed up on Andrea. In the end, there was less than a second separating me from the win.

The opening phase of the qualifying race was very impressive – you took the lead fairly quickly. Why did you have to settle for third in the end?
I had to contend with a transmission problem from early on. That cost me a top speed on the straights, although the cornering speed was fine. It was a very competitive race, but always fair and contested on a high level, which is quite something in such difficult conditions on a technically demanding track like Vallelunga. The great overtaking manoeuvre when I got past Andrea on the outside of a corner was a lot of fun. We left enough space for each other all the way through.

What was it like driving the new Formula 4 car from KCMG?
I quickly got used to the halo. Driving a hybrid car was an exciting experience. As soon as you reach 80 percent of engine output, the battery releases additional power. The battery then recharges when you brake. Because the car with its halo and hybrid unit is heavier than a normal Formula 4 car, the lap time was a bit slower.

How did you enjoy the event?
I’m impressed by the package that the FIA and the SRO have put together. Everything was really well organised, and the people were all pleasant and highly professional. At this point, I would like to thank the DMSB and ADAC for putting my name forward and for the support they gave me. I’d also like to thank KCMG and HiTech for the technology and mentoring, and Pirelli for the award of the Pirelli Speed Hero Trophy for the fastest lap of the race.