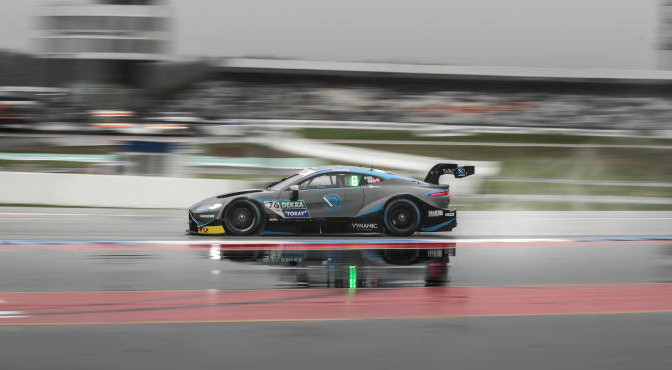 The weather at the Hockenheimring was rainy once again for the season finale on Sunday as it had been during the season opener in early May. The two newcomers to the DTM, Jake Dennis (24, Great Britain) and Ferdinand von Habsburg (22, Austria), started the last race of their season as rookies from grid positions eleven and twelve respectively.

Jake Dennis gained three positions in the race despite tricky weather conditions to cross the line in P8. This was his fifth finish in the points of the year and his second this weekend after taking a point for eleventh place on Saturday. Jenson Button had been eighth but was a guest entrant and is not eligible to score points. Jake’s team-mate, Ferdinand von Habsburg, finished eleventh.

The last race of the season ended after only a few laps for Daniel Juncadella (28, Spain). He came to a stop at the edge of the track with a technical problem during the safety car period shortly after the start.

Paul Di Resta (33, Great Britain), unfortunately, could not repeat his strong seventh place from the rain-affected second race of the season at the same venue which he had even led for a number of laps. The 2010 DTM champion was forced to retire his car with a technical issue during the formation lap behind the safety car today.

R-Motorsport successfully completed their debut season in the touring car series this weekend exactly 360 days after making official announcements concerning the outfit’s DTM project during the 2018 DTM finale at Hockenheim.

The Aston Martin Vantage DTM was developed and built in the record time of just 90 days and was rolled out at Jerez de la Frontera early in March. The car secured its first points a mere two months later during its first race outing at the Hockenheim season opener.

155 days later, R-Motorsport ended their first year in the DTM with three more points-scoring finishes in this weekend’s last two races of the season at the Hockenheimring.

Jake Dennis
Qualifying: P11
Race: P8
Pit Stop: L5
Start number: 76
Car: Aston Martin Vantage DTM
“I am pleased with the result, as we were able to conclude the season on a positive note. We decided to pit at a very early stage and stay out for a long second stint. That seems to have worked out quite well. I think I damaged the rear of the car when I had contact with Duval, which is why I drove cautiously over the last few laps. Fortunately, I had a small gap, so I was able to secure the position at the chequered flag. It’s certainly great that I scored points in both races to end the season.”

Ferdinand von Habsburg
Qualifying: P12
Race: P11
Pit Stop: L5
Start number: 62
Car: Aston Martin Vantage DTM
“Today’s race was tough. I had a little problem initially with the left front tyre, so we had to switch to a new set just before the re-start. That made things extremely difficult for me because I had no heat at all in the tyres and had to stay out for at least one lap before I could switch again to a better set. I did my best subsequently and was involved in exciting battles throughout. I really enjoyed these three and sometimes four-way battles, and so, am incredibly pleased with the result and with our team’s performance.”

Daniel Juncadella
Qualifying: P18
Race: DNF
Pit Stop: -
Start number: 23
Car: Aston Martin Vantage DTM
“I got away to a good start and everything seemed to go according to plan initially, but then, the engine died and the car caught fire. There was nothing I could do about it. Too bad, as I would like to have scored another good result for the team to end the season.”

Paul Di Resta
Qualifying: P17
Race: DNS
Pit Stop: -
Start number: 03
Car: Aston Martin Vantage DTM
“I had a problem straightaway after setting off that could not be resolved. Of course, it was very disappointing not to be able to compete in the last race of the season, especially as the conditions were in our favour today. I would like to take this opportunity to thank everyone in the team for their efforts this year. It was a season of highs and lows, but we knew it would be tough and always did our best. In view of the short time we had for preparation and development, we can be really proud of ourselves. We were aware from the start that this would be a year spent learning on the job. We achieved some notable results, both in qualifying and in the races, and we posted a number of kilometres in the lead. We must now look ahead and see what the future holds for us.”

Dr Florian Kamelger, Team Principal
“This race reflected the way our season went. Jake drove a consistently good race in the harshest of weather conditions, finishing eighth to secure our third result of the weekend in the points. Ferdinand narrowly missed the points in eleventh place but showed that even as the youngest rookie in our team, he has earned his place in the DTM. Unfortunately Paul and Dani retired with technical problems shortly after the start, which showed that we were again struggling with reliability issues even in the last race of the year. Nevertheless, we think that we’ve rounded off the year in a positive manner, on the whole. We’ve had a good showing in our debut season thanks to the total dedication of everyone in the team and produced some very decent results, finishing in the points every weekend apart from two. We must now thoroughly analyse the season and use the data and insights we’ve gained to concentrate fully on preparing for 2020. Finally, I would like to thank the team for all their hard work and the enormous effort they’ve made this year. I’m really proud of you!”