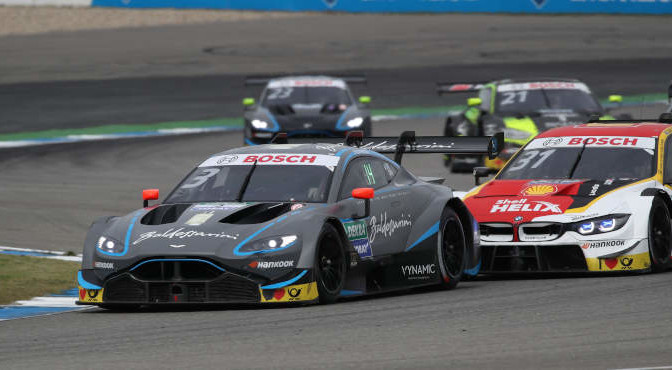 Three races at Hockenheim and three points finishes for R-Motorsport: After the double-header season opener of the 2019 DTM in early May, the team continues to score championship points in the third outing of the campaign at the Hockenheimring.

There were only three tenths of a second separating the R-Motorsport quartet in qualifying for the penultimate round of the season at Hockenheim. Ferdinand von Habsburg (22, Austria) posted the best time for the team with P12 on the grid, but was then unable to contest the race itself due to an engine problem.

Paul Di Resta (33, Great Britain) gained no fewer than nine positions during the race to finish seventh and add six more points to his campaign tally. The 2010 DTM champion produced an identical result to the one he secured in the second race of the season at the same venue in early May.

Jake Dennis (24, Great Britain) was in the thick of the action in the closing stages of the race, going wheel to wheel with BMW driver Bruno Spengler and ex-Formula 1 world champion Jenson Button in a Honda. He eventually crossed the finish line in eleventh place, just outside the points.

Daniel Juncadella (28, Spain) was the last driver in the field to come in for his mandatory pit stop which coincided with a safety car deployment. But shortly thereafter, he was forced to return to the pits with a damaged front spoiler and to retire from the race prematurely.

The drivers will return to the track at 10:35 CEST on Sunday at 10:35 for the second of the two qualifying sessions. R-Motorsport will then contest the final race of the 2019 DTM season at Hockenheim at 13:30 CEST.

Paul Di Resta
Qualifying: P16
Race: P7
Pit Stop: L15
Start number: 03
Car: Aston Martin Vantage DTM
“It’s not been an easy day for me. My start was not perfect, and I was initially unable to make much progress in the race. I also had a problem towards the end of the first stint, so I had to be careful. After that, though, we had good pace, and after two difficult days, I am very satisfied with this seventh place. It’s nice to be able to compete with your opponents through your own efforts. Hopefully, it will continue this way tomorrow and we’ll have a trouble-free day.”

Jake Dennis
Qualifying: P14
Race: P11
Pit Stop: L18
Start number: 76
Car: Aston Martin Vantage DTM
“That was an eventful race for me. My start was good and I got myself into the Top Eight. The first stint went all right, but in the second stint I had very high tyre degradation after the safety car went back in. It meant I was effectively a passenger, because I was unable to control the car properly. It was a pity, because I dropped out of the points and finished eleventh. We have to analyse the reasons for that now.”

Daniel Juncadella
Qualifying: P13
Race: DNF
Pit Stop: L19
Start number: 23
Car: Aston Martin Vantage DTM
“Right at the start of the race, it felt like something was not quite right. I drove on, though, and my race was going OK. But as the race progressed, the vibrations got worse and worse until they were so strong that I had to park the car. Too bad, but tomorrow we will have another go at finishing the season on a high.“

Ferdinand von Habsburg
Qualifying: P12
Race: DNS
Pit Stop: -
Start number: 62
Car: Aston Martin Vantage DTM
“It was very slippery in qualifying, especially at the beginning when the tyres didn’t have 100% grip. Once they were up to temperature, I could feel the grip and was really enjoying it out there. Unfortunately, I couldn’t do anything with that P12 in the race itself because I wasn’t able to start. But the crew will fix the car by tomorrow so that we can go on all-out attack again in the final race of the season.“

Dr Florian Kamelger, Team Principal
“Paul’s seventh place goes some way towards compensating for what has so far been a difficult weekend for us. Paul’s pace towards the end of the race was outstanding, and he was able to assert himself in midfield. Unfortunately, Jake’s tyres fell away sharply at the end, so that he dropped out of the points. Due to an engine problem, Ferdinand was unable to start the race from the P12 he had achieved in qualifying, and Dani was forced to retire with a damaged front spoiler. But we are looking forward to tomorrow’s race with optimism and, with poor weather having been forecast, we intend to go on full attack mode. Our hard-working racing team deserves a decent result at the end of the season.“