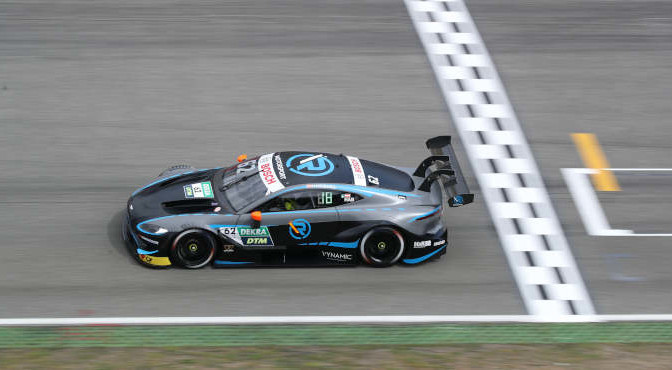 Grand finale for R-Motorsport: A look at the milestones of the debut season, from vehicle development in record time through to the first race-leading laps and best team result.

Five months and one day after the race debut of the Aston Martin Vantage DTM, R-Motorsport will return to the Hockenheimring next weekend (4th – 6th October) to round off the team’s debut season in the DTM at the same venue. The final weekend at Hockenheim will therefore be the first in the history of this young team where it will be competing on a track for which it has prior data. In the 16 season races so far between the opening race on 4th May of this year and the two next weekend, the team has passed a number of milestones, experiencing some highs as well as instructive moments along the way.

First outing: On Monday 4th March at 3pm local time, Paul Di Resta took the new Aston Martin Vantage DTM out for its first test run on the former Formula 1 circuit at Jerez de la Frontera. In the run-up to the rollout on the day before the first official test sessions, the team had already won its own race against the clock: the new car was developed and built in an absolute record time of just 90 days thanks to a prodigious effort by everyone involved.

First race: Just two months after the rollout, the Aston Martin Vantage DTM was making its race debut at Hockenheim. And what a weekend that was! On only its first ever competitive outing in the DTM, the team scored its first championship points. The weekend began with Paul Di Resta booking third place in qualifying, for which he scored a point. Daniel Juncadella then added two more in the race itself – only six months after the inception of the R-Motorsport DTM project.

First leading laps: The next memorable moment came on the following day. In the second race of the season, Paul Di Resta’s Aston Martin Vantage DTM led the field at one stage. The 2010 champion eventually crossed the line in seventh place, thereby putting the team on the map. For Di Resta, it was also the 800th championship point of his DTM career. During its debut season, the team has held the lead at some point in nine of the 16 races so far contested. The total time spent as race leader amounts to 40 laps (157km), 15 of which were in the home race for Aston Martin at Brands Hatch.

Best race results: In the course of the 16 races contested so far, the R-Motorsport quartet has made it into the Top Ten on 15 occasions. The best individual results were a P6 in the second race at Zolder (Jake Dennis) and a P6 at the Norisring (Daniel Juncadella). In the standout event of the DTM season in the streets of Nuremberg, R-Motorsport achieved their best team result, with three drivers in the points. Juncadella and Di Resta are well-established names in the series, but the two DTM rookies, Jake Dennis and Ferdinand von Habsburg, also got themselves onto the championship points board with Top Ten finishes on the second weekend of the campaign at Zolder.

Comments on the forthcoming race weekend at Hockenheim

Jake Dennis:
“The season has certainly had its highs and lows. We have achieved some fantastic results as a team, including the two P6s for me at Zolder and Dani at the Norisring. We can be proud of that. But there were also difficult moments that welded us together even stronger as a team and made our package better. My best memory of Hockenheim is probably the first free practice there in May. When I first exited the pits as a DTM driver, it was a very special feeling for me. I had been working towards that moment so hard for so long. Hockenheim is a great circuit that offers everything: fast corners, a tight 180-degree hairpin and the stadium section, the Motodrom. Quite simply, a bit of everything. When you put all of that together, you get a fantastic track. The best overtaking opportunity is definitely Turn 5. You can use DRS and push-to-pass on the long straight going into the very tight hairpin. This also produces some great pictures on TV. I’ve won at Hockenheim a few times in recent years, most often in Formula Renault. In Formula 3, we came close to winning, but we never made it onto the top spot of the podium. Hockenheim is one of my favourite tracks, and I’m really looking forward to competing there again.”

Paul Di Resta:
“This season has been an up-and-down one for me. Of course, you’re always aiming for more, but we’re seeing progress from race to race, and we’re constantly reducing the gap. The races at the Nürburgring and at Assen were real turning points for us. There is obviously still a lot to learn and to improve on. But we can all honestly say that we have done our very best. I would therefore like to thank every single member of the team for their commitment this year. It has been a superhuman effort. The highlight of my season so far was leading the field at Brands Hatch. We achieved that through our own endeavours after a good qualifying and it was absolutely deserved. At Hockenheim, I like the last sector best. It is an enormous challenge to do a complete lap of this track without making any mistakes. Of course, the best place to overtake is the hairpin. I have some fond memories of good races at the Hockenheimring. My most memorable win there was in the 2010 season, when I started from fifth on the grid. I can hardly believe that this DTM season is almost over!”

Ferdinand von Habsburg:
“My debut season in the Aston Martin Vantage DTM has been a rocky road, but I am very pleased to have scored some points this year. I’ve been able to improve from race to race. It was clear to us from the beginning that this would be a year of apprenticeship for the team and for me, and I am convinced that we have made the best of it. Sure, we all want to get even better, and we are still waiting for our first big result. My standout moment of the season so far has been the race at Brands Hatch. I had always wanted to compete on this track. Although it was a tight and hectic weekend, it was definitely the highlight for me. With regard to Hockenheim, I have to say that I like Turn 1 the best – that’s a really fast corner. It’s all about downforce, which makes it a lot of fun. The hairpin in Turn 5 is a good place to attack an opponent. Overtaking is never easy, but if you have an advantage in terms of pace, this is where you can try it. It’s also a good section for building up to an overtaking manoeuvre and then nailing it as you brake into Turn 7. My best result at Hockenheim so far was a P3 in my first year in the Formula 3 European Championship. That was a great way to round off a good rookie season. I hope I can manage a similarly positive conclusion to the current DTM season next weekend.”

Daniel Juncadella:
“Speaking personally, I think I can look back on a strong season. It’s been a tough year in every way, but we have shown fighting spirit and will carry on doing so. We will continue to work hard towards achieving our objective of being potential winners in the next season. Hockenheim is another test along the way. I aim to round off my first season with the team with a success. So far, the Sunday race at Assen counts as my absolute highlight of the campaign. In the second stint, we ploughed our way through the field with two cars and only narrowly missed out on fifth place. It was a little bit unexpected, but it was nice to see the sort of performance we were capable of there. I love the track and the atmosphere at Hockenheim. I’ve been competing there for so many years that it feels like home to me. That’s what I like best about the track. The hairpin at the end of the Parabolika is certainly the best place to outbrake an opponent. It’s a tight 180-degree turn, which gives you the opportunity to get alongside the other car. I have fond memories of Hockenheim, where I won a few times in Formula 3. Unfortunately, I still haven’t managed a podium finish there in the DTM. In the 2013 season, I came close but then had a collision with another driver a few laps from the end. Last year, I was in third place until the safety car came out and ruined my chances. I’m now hoping that my hour of glory may come in a Vantage!”

Dr Florian Kamelger, Team Principal
“As we go into the DTM finale at Hockenheim, we can look back on an eventful debut season. Despite the reliability issues that have arisen and were expected in the light of the extremely short time we had available to develop our Aston Martin Vantage DTM, it has gone well on balance. We were up against major manufacturers who are far more experienced and have been competing successfully over many years. The highlights of our debut season so far were the P6 finishes for Jake at Zolder and for Dani at the Norisring. In addition, Paul qualified on the second row twice – a P3 in the season opener at Hockenheim and a P4 in Aston Martin’s home race at Brands Hatch. There have been only two DTM events so far from which we came away empty-handed. In the absence of years of preparation and development time for us as a rookie team, the races we have contested so far have served our hard-working team as test drives with the new technology package. Our thanks go to all those in the team who have worked so assiduously over such long hours on our DTM project. As we go into this last race weekend, it is now time to mobilise all of our resources so that we can finish the 2019 DTM season on a high.”