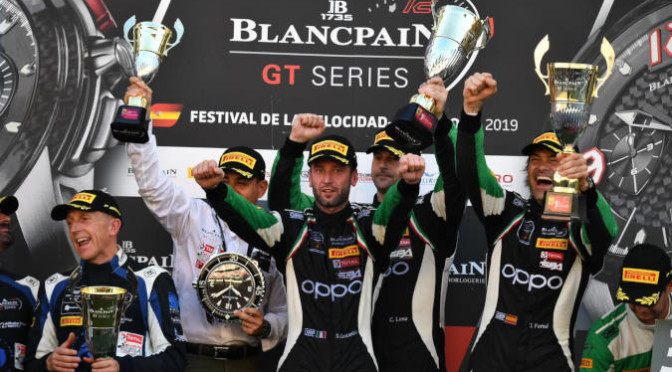 The Girona native claimed the AM class race win at the season finale of the Blancpain GT Series Endurance Cup. Forné, who was the quickest of the drivers racing under the Raton Racing by Target banner, stepped onto the top spot of the podium at the Circuit de Barcelona-Catalunya with teammates Stefano Constantini and Christoph Lenz, with whom he shared the driving duties in the Lamborghini Huracán GT3 EVO 2019.

Toni Forné concluded the 2019 Blancpain GT Series Endurance Cup in style yesterday with the Spaniard taking an amazing AM class win driving the Raton Racing by Target-entered Lamborghini Huracán GT3 EVO 2019. The Circuit de Barcelona-Catalunya brought the curtain down on his European GT campaign and Forné added another podium finish to his tally after also stepping onto the rostrum at the 24 hours of Spa-Francorchamps and the 3 hours of Monza teaming up with Stefano Constantini and Christoph Lenz.

Forné made a nice start to the Spanish venue as he and his teammates led the way for Raton Racing by Target in their #29 Lamborghini as they posted the quickest lap time (1m46.634s) in the Bronze Test. After several private and free practice sessions on Saturday, Forné headed into the qualifying session on Sunday morning. Forné qualified the car in Q2 and clocked a lap time of 1m47.200s to take the third spot in the AM class. Later, Constantini and Lenz posted lap times of 1m47.573s and 1m48.221s to complete an average lap of 1m47.664s and they ranked 4th in class and 38th overall.

With an impressive field of almost 50 cars, Forné made the opening stint due to his experience on the Catalan circuit. He avoided any clash in an incident-marred first lap, which caused a 35-minute safety car period. Back in green flag conditions, Forné was hit by another rival and, despite lost several places, he put in a recovery drive to head into the pit-lane second in class after a solid 65-minute stint. Forné handed over to Lenz with Constantini climbing in the car for the final hour. Constantini moved past Miguel Ramos, the latter also driving a Barwell’s Lamborghini Huracán GT3 EVO 2019, to take the lead. After 3 hours of action-packed racing, Constantini crossed the finish line first in class and 20th overall with a 20-second gap on the Garage 59-run Aston Martin Vantage AMR GT3.

“Such a fantastic result to conclude our participation in the 2019 Blancpain GT Series Endurance Cup season. It was a tough weekend but we managed to overcome everything to secure a valuable class win. I was the fastest driver of my team in qualifying but we couldn’t qualify pretty well due to my teammates Stefano and Christoph struggled to set a clean lap” said Forné. The Spaniard added that “the race start was another key moment following a big shunt in the first lap, which brought the safety car out more than half-an-hour. At the restart, I had already passed several cars but lost two or three places when a Ferrari hit me. I pushed hard to move through the field and I finished my stint second in our class to hand over to Christoph. Stefano and Christoph himself delivered two strong runs to round off the massive effort of the whole team. It is worth to remark that the track surface was extremely slippery and as a result it made things quite to deal with at the wheel of our Lamborghini. It was pretty easy to make a mistake and probably it caused so many accidents. We think it happened due to rubber on the track from other racing series using Michelin tires, which affected our Pirelli tires performance a lot. I am pretty happy with my stint because I posted very competitive lap times and it laid the foundations for our class win.”

Forné, Lenz and Constantini ranked 3rd in the AM class with 92 points. In the same way, Raton Racing by Target also took third place in the Teams’ Standings with 95 points.