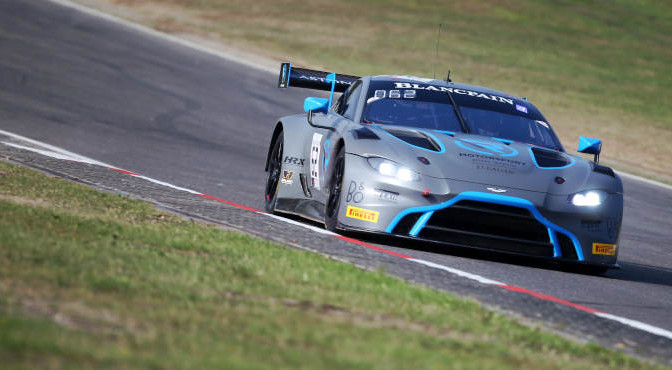 After a break of 37 years, the prestigious Kyalami Grand Prix Circuit is returning to the big motor racing stage at the end of November, and R-Motorsport will be there. The team will race two Aston Martin Vantage GT3s in Kyalami’s 9-hour race, 21st to 23rd November 2019.

Nürburgring winner Marvin Kirchhöfer, Hugo De Sadeleer and Ricky Collard will share the drive in the car bearing start number #62. The #76 Aston Martin Vantage GT3 will be driven by Maxime Martin, Jake Dennis and Enaam Ahmed, who will have his first race outing for the team.

The 19-year-old British driver has been gradually gaining experience in Formula 4 and various Formula 3 series since first joining formula motor racing in 2015. He won the British F3 Autumn Trophy in the 2016 season and crowned himself British Formula 3 champion a year later, having secured 13 victories. After a year in the FIA Formula 3 European Championship, he switched to Japanese Formula 3 for the 2019 season which he finished last weekend in third place overall, having taken two wins.

“After the 12-Hours of Bathurst and the 24-Hours of Spa-Francorchamps, the 9-hours of Kyalami will be our third GT3 endurance race in the Intercontinental GT Challenge,” said Team Principal Dr Florian Kamelger. “Once again, our squad of drivers will be made up of experienced crew members and young talents. We would like to extend a warm welcome to Enaam Ahmed, who is the youngest member of our team. We will be giving him an opportunity in Kyalami to demonstrate his skills in one of the world’s most demanding endurance events. The race on the outskirts of Johannesburg will place special demands on man and machine with high day-time temperatures and finish at night when it’s much cooler. We are really looking forward to the challenge and to our race debut in South Africa.”

The 9-hour race on the 4.52-km Kyalami track was last held in 1982 as part of the FIA World Sportscar Championship. Twenty Formula 1 races in all took place on the South African circuit between 1967 and 1993 with a few breaks.

This year, Kyalami will be the last round in the Intercontinental GT Challenge which includes the 12-Hours of Bathurst, the 8-hour race at Laguna Seca, the 24-Hours of Spa-Francorchamps and the 10 Hours of Suzuka. The race will start on Saturday, November 23rd at 1.00 pm local time.