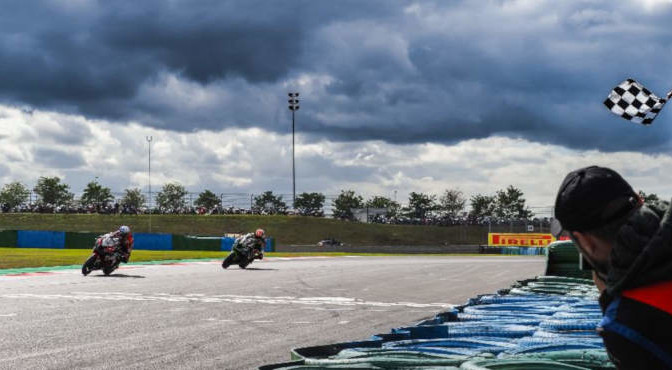 The Pirelli French Round produced one of the races of the WorldSBK season so far as five different riders lead at various stages, before Michael van der Mark (Pata Yamaha WorldSBK Team) crashed out of the lead three laps from home, seemingly handing victory to Jonathan Rea (Kawasaki Racing Team WorldSBK), before a stunning final lap saw Toprak Razgatlioglu (Turkish Puccetti Racing) take the spoils, despite starting from the sixth row.

As the race got underway, Jonathan Rea came under immediate pressure from Michael van der Mark with two almost colliding into the Adelaide hairpin on lap one. Their duel allowed Tom Sykes (BMW Motorrad WorldSBK Team) to storm through from sixth on the grid to second by the end of lap one.

Sykes’ progress continued on Lap 2 as he used the corner speed of the BMW to overtake Rea at Estoril, although the leading group was growing and growing with Chaz Davies (ARUBA.IT Racing – Ducati) joining the action from 11th on the grid, while a remarkable early charge brought Toprak Razgatlioglu into play, despite starting down in 16th.

On Lap 3, Davies became the third different leader in as many laps but the Welshman’s challenge came to a dramatic end moments later with a crash into Turn 15. Davies’ lost the front end of his machine with second-placed Toprak Razgatlioglu fortunate to stay upright despite slight contact from the errant Ducati. The chaos allowed Sykes a moment of breathing space but the BMW rider was quickly reeled in, losing the lead to Michael van der Mark on Lap 6.

With the battle continuing to rage in the leading group, van der Mark was able to open up a slight advantage while Jonathan Rea came under intense pressure following a moment at the Nurburgring chicane. Toprak Razgatlioglu was able to edge ahead, setting the fastest lap in the process, but Rea ultimately regained P2 from the Turkish rider shortly after half-distance, allowing him to give chase after van der Mark who was 1.2 seconds to the good.

Behind the leading trio, Loris Baz (Ten Kate Racing – Yamaha) had established himself in an excellent fourth with Tom Sykes settling in fifth after an all-action start. Alex Lowes (Pata Yamaha WorldSBK Team) was holding sixth but the Briton was coming under increasing pressure from Alvaro Bautista (ARUBA.IT Racing – Ducati) as the Spaniard chased valuable championship points. Leon Haslam (Kawasaki Racing Team WorldSBK) was also in the thick of the action but a highside at the final chicane eliminated him five laps from home.

With clear track in front, Jonathan Rea began his relentless chase of Michael van der Mark, wiping out his advantage heading into the closing stages. With three laps remaining, the leading pair were together but van der Mark’s hopes of a second victory of 2019 were extinguished when the front end of his Yamaha folded into the Adelaide hairpin, the pressure proving too much.

Rea seemed on course for a 12th victory of the season, beginning the final lap one second clear of Razgatlioglu but a stunning final lap from the Turkish rider brought him right into the tail of the Ulsterman entering the last sector. Under braking for Turn 15, Toprak dived up the inside with Rea keen to avoid a costly collision, opting to settle for second.

The fight for the final podium spot also went down to the wire with Tom Sykes rallying in the latter stages to overhaul Loris Baz, securing BMW’s fourth podium of the season. Baz held on to fourth while Alvaro Bautista recovered up to fifth in the end.

In the end, van der Mark remounted to finish 13th to secure three points which may prove valuable in the ever-tightening race for third in the championship standings. At the top, Jonathan Rea has extended his advantage to 100 points over Alvaro Bautista, and the possibility remains of a fifth title being clinched tomorrow.

P1 – Toprak Razgatlioglu (Turkish Puccetti Racing)
“I am so happy! The last lap was so stressful for me because I knew I was faster. I tried to pass Johnny, but the front was sliding a lot. I pushed hard and tried to keep the bike straight, and I made it. It is my first victory, and I extremely pleased with this! I am crying! It has been my dream for this season, and I achieve that. Now we see what will happen next race. I don’t know how tomorrow will be. I hope it won’t be raining! Thanks to all my team because today that have done an incredible job”.

P2 – Jonathan Rea (Kawasaki Racing Team WorldSBK)
“I was expecting a fight because with these conditions no ones had the chance to work on the bike setup, so today was the same for everybody. I was a little bit worried in the beginning because the conditions were not perfect and in the first ten laps, I felt like we were racing like kids, but it was a lot of fun! When the race settled down, Van Der Mark kept a good rhythm, he went away and slowly I could catch him. I put my head down in the last laps, but I made a big mistake in the last lap and gave a big opportunity to Toprak to come and make that move. I am a little bit frustrated but happy with the result because the podium is a good result. I want to congratulate Toprak because he deserves this win, but we will try to change the order tomorrow”.

P3 – Tom Sykes (BMW Motorrad WorldSBK Team)
“I enjoyed riding today. I did a good start, and I settled in nicely. With the team with a made a small change to the bike between the last race and now that allowed me to ride with a little bit margin, so I really enjoyed riding my bike today. In the beginning, I swept positions with a few guys who were trying to get a better position, and we were able to fight. The chassis and the tyres stayed consistent throughout the race, sure we still to find some things in some area, but overall a podium is promising here giving that we are only tenth months now into the program. We are thrilled with our efforts, and hopefully, we can keep up the pace for tomorrow”.