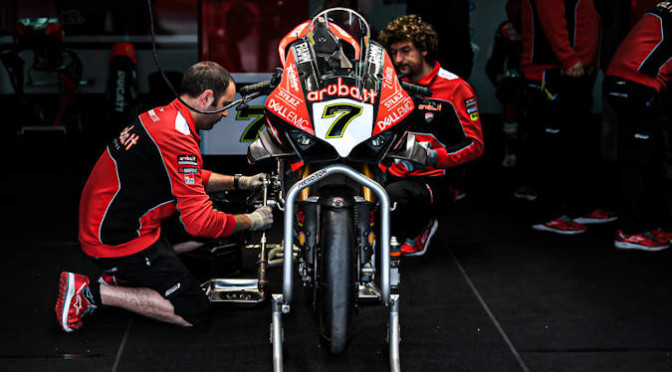 Ducati are the undisputed leaders at Magny Cours with 16 wins, as the next competitor is Kawasaki at half that number (8). The last three wins came in 2016 (double) and 2017 (Race 2) with Chaz Davies. Last year, Ducati recorded two podium placements with Xavi Fores third in Race 1 and Chaz Davies second in Race 2. The Italian manufacturer also leads the podiums ranking at the French Track with 38: more than the double of their next competitors, Kawasaki and Yamaha at 17 each. Despite being the most successful manufacturer for wins and podiums at Magny-Cours, they recorded only one Superpole here, in 2003 with James Toseland.

It is Kawasaki to hold the record of Magny-Cours Superpoles, seven, to Yamaha’s and Honda’s three each. They have won eight times at the French track, and all wins coming from 2012 onwards. They are the team to beat as last year, Jonathan Rea the double. In 2018, Kawasaki was able to equal Yamaha for Magny-Cours podiums, 17, at the second spot behind Ducati (38), scoring three podiums out of possible four with their works riders Rea and Sykes. In the last seven Tissot Superpoles here, the best Kawasaki on the grid was either on pole (2012, 2013, 2014, 2016, 2017, 2018) or second on the grid (2015).

Yamaha won five times in Magny -Cours, the last one coming in 2010 from pole in Race 1 (Cal Crutchlow). Last year, they scored one podium with Michael van der Mark, third in Race 2, enough to keep the second spot for Magny-Cours podiums, the same number as Kawasaki (17 each).

Honda have won twice at French circuit: the first time in 2005, when Chris Vermeulen won from pole in Race 1 and the second time the following year, when James Toseland won Race 1. Since that last win, the Japanese manufacturer have been on the podium seven times at Magny-Cours, finishing in third no less than in five of them. The last placement on the Magny-Cours rostrum was recorded in 2016: a second place by van der Mark in Race 1. Last year, their best result was a ninth in Race 2 by Leon Camier. They had their share of bad luck, as Jonathan Rea fell twice while leading: in 2012 race 1 and 2014 in race 2.

BMW scored two podium finishes at Magny-Cours: Leon Haslam was third in the first 2011 Race, while Marco Melandri was the runner up the following year, always in Race 1 behind Sylvain Guintoli. Last year, they recorded two 10th places with Loris Baz.