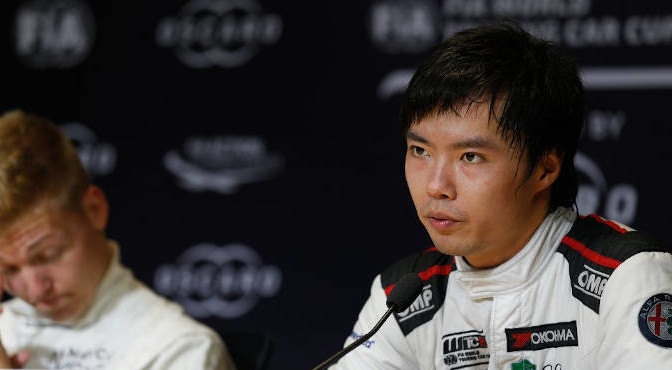 Q:
As the WTCR / OSCARO points leader you’re the driver all your rivals want to beat. How does that make you feel?

EG:
It feels good to be in front because of course it’s better for the others to catch you than you to catch the others. But it doesn’t say much at this point in the year because there are still a lot of points left in the game and it’s coming to the most important part of the season. It will be very intense and the battle to the end of the championship will be with more than two or three cars, probably five or more. It’s about just trying to get focused on scoring points and trying to maximise the opportunities. I like this track a lot so let’s try to make a good job here in China.

Q:
Ningbo holds a special place in your heart after your victory here in 2017. What are your best memories of that day?

EG:
This track is a great one for me, not only because of the driving, because it’s a great one to drive, but because since it was the inaugural of the track in 2017 I was back then with a private team and under the rain we did a very good job to get a nice win and that gave me the opportunity to then change to Honda and become an official Honda driver. I would say it was a breakthrough in my touring car career and it happened here in very intense weather conditions. I really like this place, it gives me very good energy and hopefully again we can deliver something this weekend.

Q:
Your team-mate Yvan Muller knows all there is to know about breaking records but you’re a record breaker now yourself. Can you tell us about your recent achievement at the Nürburgring Nordschleife?

TB:
We did a really nice run on the Nürburgring and it was fantastic to be part of the Lynk & Co challenge you could say because we made a concept car that broke this record and it was the first Chinese car that broke this record. I’m really proud of that. This is our home race, everybody is really excited to be here, to meet the fans and the Lynk & Co people. The summer was great and like Esteban said this place gives me good energy because I had a really good result last year, a good place.

Q:
It’s fair to say you mastered Ningbo in impressive style last season but what have you worked on during the summer to make you even more competitive for part two of the season?

TB:
This is what we want. It’s the first time we are here with the Lynk & Co 03 so it’s not so easy. We will fight really hard to repeat it and try to get some victories but it’s a really hard championship. Esteban has shown you have to be on the top to get the points all the time. We have been preparing as good as we can, taking the knowledge of the first races and put it into the car and see what we can do.

Q:
You were the TAG Heuer Most Valuable Driver at Vila Real so what can you achieve at Lynk & Co’s home race?

YE:
We had a really good result in Vila Real and that was good to go into the summer break like this. Of course we are coming to our home race when you see all the Lynk & Co around. Of course we have a bit of pressure to do a good result in a Chinese car on a Chinese track and it would be really great for the brand. We are looking forward to this event definitely. It’s going to be tough, quite warm conditions, a lot of humidity and difficult to manage but we have a good package to put our package in the front.

Q:
While you’ve raced at this track before, your team-mate Andy Priaulx is a Ningbo rookie. What have you told him about this track and the challenge you face?

YE:
He’s not a proper rookie because he learn 1000s of tracks [in his career] so he will definitely know quite easy how to learn this place. When Esteban told he got the win two years ago I finished P2 with my old private car. It gives me some good memories and I quite like this place.

Q:
Turning finally to the home hero Ma Qinghua and a great start to your WTCR Race of China weekend with the fastest time in FP1. Firstly, please talk us through that lap?

MQH:
First of all, I’m very happy to race here at home. After the summer break this is like a wake-up session and it’s so far, so good. The team did a really well job to set my car. There are a lot of things to learn from the past, especially in the beginning of the season. Many things have been improved and we needed to carry on the work to here. There’s always something you need to improve but we are all very positive and I’m really happy to be here in this moment and I am really enjoying this weekend.

MQH:
I am really happy to see as a Chinese to see a Chinese manufacturer to have a good performance in the championship. For the moment I am against them but I am really positive on this and I want to carry on the performance in this season and try to improve again. I hope we can both have a nice weekend.