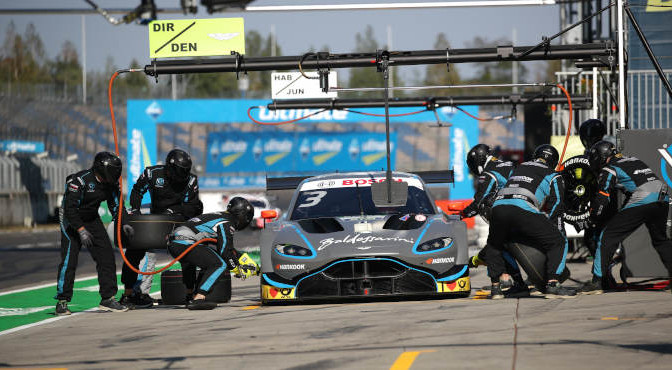 R-Motorsport will head to the Nürburgring for the penultimate race weekend of the 2019 DTM season, 13th-15th September, when the team will face the notoriously, unpredictable Eifel weather and tackle its challenging 3.629 km circuit.

Having a car that is stable under braking at the Nürburgring is absolutely crucial, especially on the approach to the first turn after the start/finish straight and before the chicane at the end of the lap. Drivers undergo maximum deceleration forces of 2.4 G in the braking zone before the first corner.

On the approach to Bilstein, the fastest turn on the entire circuit at 135 km/h, vehicles clock up 2.0 G in lateral acceleration forces when cornering. By way of comparison, drivers take the slowest turn, the chicane on the short version of the Nürburgring, at just 75 km/h.

The new turbo-engined vehicles in the DTM should reach a calculated top speed of up to 265 km/h (with DRS) on the former Formula 1 circuit. Drivers will make 36 gear changes over a lap.

R-Motorsport’s first session of the race weekend is scheduled to start on Friday at 10.00 am and finish at 11.30 am even before the cars have left the pits for the first time at 1.00 pm to take part in FP1. At a press conference in the Team Hospitality, Dr Andy Palmer, President and Group CEO of Aston Martin Lagonda, Team Principal Dr Florian Kamelger and team co-owner Dr Andreas Baenziger will set out details of exciting international R-Motorsport projects for the 2020 season.

Comments about the Nürburgring race weekend

Jake Dennis:
“The Nürburgring is, unfortunately, not one of my favourite circuits, because I’ve had a lot of bad luck there in every race so far, but I would be only too pleased to finally put my run of bad luck behind me this year. Turn 1 at the end of the main straight is probably the biggest challenge. The braking zone there is very bumpy, so front tyres lock up easily. The corner is configured in such a way that the right front wheel lifts slightly off the ground, making it really difficult to hit the apex properly. My first race on the Nürburgring was in 2012 in the Formula Renault 2.0 championship. I’ve raced a lot at the Nürburgring since, but unfortunately, only finished 10% of the races. In the others, I’ve either had to retire or have been involved in crashes that were not my fault. Still, I did come third once in Formula 3. However, my best memory of the Nürburgring is not from racing on the grand prix track but from driving a road-going car on the Nordschleife. That was a sensational experience. This track is absolutely incredible.”

Paul Di Resta:
“I really like the track, on which the DTM will be racing, and in particular, love how short the lap is. The first sector is really difficult. The chicane in the middle sector is a very nice, medium-fast to fast, left-right combination and is quite crucial. I drove my first race on the Nürburgring in 2005 in the Formula 3 Euro series. I had a fantastic race there last year when I was able to fight my way up into second place. The DTM race from 2008 also stands out in my mind when I stayed out on track in the rain while running slicks. I wouldn’t mind if it rained again this upcoming race weekend, as racing would then be much more unpredictable for us and our rivals.”

Ferdinand von Habsburg:
“I really like the Nürburgring and its sporting tradition. Even the short version of the grand prix circuit is very challenging. The braking zone on the approach to Turn 1 runs slightly downhill and always encourages drivers to undertake exciting, but sometimes over-optimistic overtaking manoeuvres. If you can pull it off, then it feels real nice. Unfortunately, we won’t be driving on the best part of the circuit, namely the Nordschleife. That would make quite a long lap, but still, I live in hope that the DTM will race again there someday. Turns 3 and 4 are probably the most demanding passages on the new circuit, as they are very difficult and narrow. You can easily make a mistake there. I first drove at the Nürburgring in Formula Renault 1.6 in 2014 and promptly went out and took a podium. I can well remember the really nice scrap I had with my team-mate.”

Daniel Juncadella:
“I love the Nürburgring, and not just the race track, but the whole ambience of the region. The Nordschleife is my absolute favourite circuit. The last chicane is probably the most difficult section on the new track and represents the biggest challenge. You have to brake very late, but at the same time you must run over the kerbs in order to position the car right, which is technically very demanding. I drove at the Nürburgring for the first time in 2007 in Formula BMW Deutschland. However, my most successful races were in 2011 and 2012 when I took four pole positions in the Formula 3 Euro series and won three of the four races. My best memory of the Nürburgring, though, is the 24-hour race. I love this event, and the atmosphere can only be described as fantastic. I drove there once in a massive thunderstorm and our car was very fast in the rain. I still remember that I was around 30 seconds per lap faster than anyone else for half-an-hour or so. Unfortunately, it ended in an almighty crash just after the start/finish straight as a result of aquaplaning which I had not expected. That was very frustrating, but I certainly learned something from it.”

Dr Florian Kamelger, Team Principal
“We’re really looking forward to the first outing for our R-Motorsport DTM team at the Nürburgring. After the disappointing finish to the last race when we failed to score any points, we feel quite confident about the two races on the Eifel circuit where we achieved a superb victory in the Blancpain GT3 race the other Sunday. We have another premiere in store for the media on Friday morning when we will unveil a very special vehicle at our Hospitality in the paddock. The Nürburgring will present our Aston Martin Vantage DTM with a completely different set of challenges as compared to last time out at the Lausitzring. Here, the car needs to be consistently stable under braking, especially on the approach to the first corner after the start/finish straight and in the extremely narrow chicane. Furthermore, the car needs to be well balanced through the many tight combinations of turns, which is very important. Of course, our goal is to score as many points as possible again. Maybe the often changeable Eifel weather will help.”