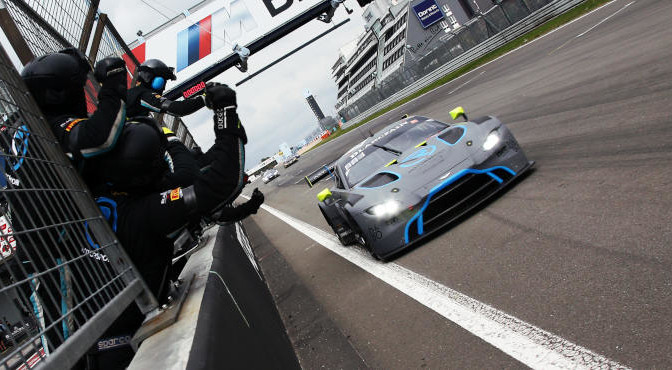 A decent grid position, fast pace and a bit of luck – these elements came together at the Nürburgring for Marvin Kirchhöfer and Ricky Collard as they chalked up a first win of the season for R Motorsport in the Blancpain GT World Challenge Europe.

Starting from fifth place, the Anglo-German pairing delivered a flawless performance to close the gap on the Top 3 by the end of the first stint. By virtue of a quick pit stop, the number 76 Aston Martin Vantage GT3 emerged from the pit lane on course for a podium finish. Mistakes by the two race leaders then did the rest. Despite pressure from the pursuing pack, Collard asserted the lead and nailed on the first place for R-Motorsport.

“A brilliant race,” said a visibly relieved Kirchhöfer afterwards. “We have been working towards this first win of the season for a long time, and now at last we’ve done it. The team did an incredible job. This success gives everyone an extra motivational boost going into the remaining races of the season.”

Aaro Vainio and Hugo de Sadeleer once again showed what talented prospects they are. Vainio’s accident at the beginning of the first Free Practice meant that the duo had to miss the second session completely, but in the race itself, the Silver Cup contestants made amends. “Obviously, we did not manage to put in many kilometres during the practice sessions, but the mechanics did a great job of getting the car repaired in time for the Qualifyings, so they deserve a big vote of thanks”, said Vainio. “Our grid position for the races was consequently sub-optimal, but we were able to work our way forward in the race. Fifth place in the Silver Cup on Saturday was a good result, and on Sunday, we even made it onto the podium with third place.”

The grand finale to the 2019 Blancpain GT World Challenge Europe will take place on the weekend of 6th – 8th September at the Hungaroring, just outside Budapest.

Dr Florian Kamelger, Team Principal R-Motorsport: “What a great race result! Marvin, Ricky and our pit crew have done a great job. On top of that, we had the podium finish by Aaro and Hugo in the Silver Cup, which made our day perfect. We are proud to have not only secured our first win but also a first ever triumph this year for Aston Martin in the Blancpain GT Series. Everything went well today, from the incredibly fast pit stop and Ricky’s fastest race lap to the overall victory.

However, the joy we feel is tinged with sadness. I would like to express our sympathy for the family of Anthoine and for our friends and colleagues in the Arden team, who are going through such a difficult time this weekend.”