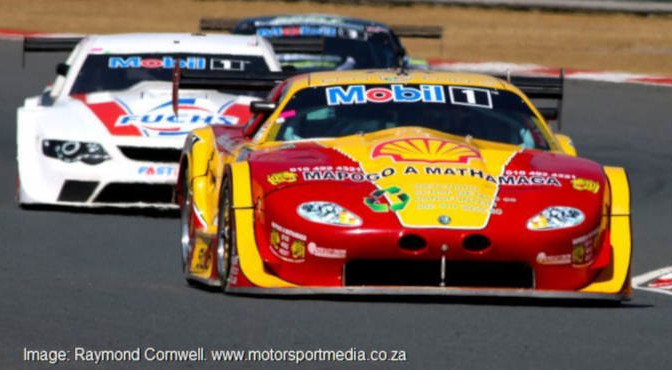 It was a tale of veterans and champions at Kyalami as the biggest grid of V8s to ever race in South Africa exploded into action at the Grand Prix Circuit’s unique Festival of Motoring over the weekend. Veteran SA race hero Ben Morgenrood was the surprise of qualifying as he put his Mustang on pole position before former champion Franco di Matteo beat Morgenrood and Roelf du Plessis to the opening of the Mobil 1 V8 Supercar win and then reigning champion, Mackie Adlem defeated Terry Wilford and du Plessis in race 2. Champion Fabio Tafani and Sean Moore shared the V8 Masters race wins.

Race 1 delivered a splendid dice up front between Ben Morgenrood, Mackie Adlem and Franco di Matteo as Morgenrood went ahead at the start, before Mackie found a way past, only for Ben to grab the lead back a lap later. It remained like that for four laps, before Adlem again made a move on Morgenrood to lead a lap. But he then dropped back to allow di Matteo to make his move, from where Franco soaked up the pressure to take a narrow 0.28 second win over Morgenrood. Du Plessis had meanwhile come into play and he managed to pip the recovering Adlem to third.

It was a race of attrition behind them as Julian Fameliaris (Corvette) failed to start following troubles on Friday and JP Nortje also never made the grid and then Izak Spies stopped after a lap. Lap 3 proved terminal for Antonie Marx, Ian Young (Associated Falcon) and Masters duo Johann van de Venter and Rob Warrington, before Thomas Reib and Auke Compaan (Hurricane XKR) dropped out of top ten positions a lap later, along with Steve Herbst (PREI Corvette).

The reverse grid second race saw Terry Wilford on pole from Volschenk, Schalk Compaan, Larry Wilford and Coetzee with old man Larry soon ahead from Adlem and Terry Wilford as Volschenk and Compaan dropped back and du Plessis and di Matteo made up ground early on. The dice up front saw Terry Wilford pass his dad at mid distance as Adlem followed him through and made his move a lap later to lead Terry home by 1.5 seconds. Du Plessis meanwhile found a way past Wilford senior for third, leaving Larry to fight off di Matteo as Morgenrood held a watching brief in sixth.

That also left the V8 Masters to entertain in their own race behind as Sean Moore made a great start from his reverse grid slot, while Fabio Tafani took some time to make his way through the pack before hauling Moore in. Sean was having none of it and he held his ground to take a thrilling 0.3 second win over Pretoria championship leader Fabio, who normally travels to the Cape to race.

The V8 Masters now rush back to Killarney for their next race in two weeks time, while the V8 Supercars head to Port Elizabeth next on 21 September. The Kyalami grand Prix Circuit meanwhile now prepares for the intercontinental GT Masters 9-Hour in November.