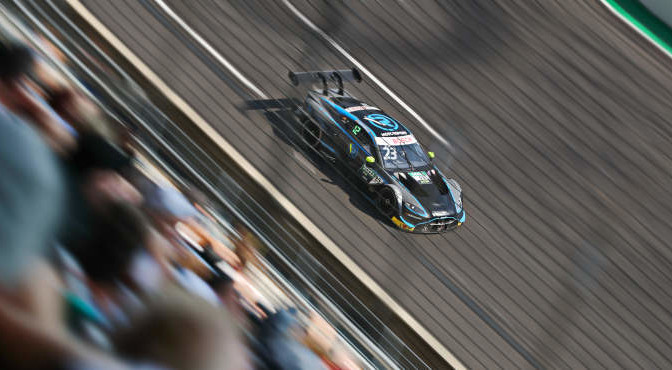 hird-to-last race weekend in DTM debut season: R-Motorsport face up to the unique challenges of the Lausitzring. 35 years ago, on 11th March 1984, the first race in the history of the DTM took place at Circuit Zolder in Belgium. At that time, the series was officially known as the ‘Deutsche Produktionswagen-Meisterschaft’ (i.e. German Production Car Championship). Since then, 500 races have been contested, 14 of them during the current 2019 season in which the four Aston Martin Vantage DTMs of R-Motorsport have lined up on the grid. R-Motorsport’s debut season with the Aston Martin Vantage DTM, a car developed in record time, continued in Sunday’s milestone race at the Lausitzring. In the course of the afternoon, the team accumulated more valuable racing kilometres with the new DTM vehicle, which had its first competitive outing in early May after only 90 days of development and construction. Daniel Juncadella (28, Spain) drove a long first stint and did not pit until Lap 21 for his regulation tyre change. He ultimately crossed the finish line in twelfth. Paul Di Resta (33, Great Britain) has fond memories of the Lausitzring: in 2008, it was where he won the first of his eleven DTM victories. This year, however, the 2010 DTM champion was out of luck, having to retire shortly after completing his mandatory pit stop on Lap 17. Unfortunately for Jake Dennis (24, Great Britain), the 500th DTM race was already over at the end of the first lap. The Brit, who narrowly missed out on a points-scoring result on Saturday after a sustained battle for position with team-mate Juncadella, had to park his car on Sunday with a mechanical failure. A few laps later, Ferdinand von Habsburg (22, Austria) was likewise unable to continue the race. The Austrian came to a halt at the side of the track on Lap 10 after a contact with another car. The next stop on the DTM itinerary after the milestone race at the Lausitzring will be the Nürburgring on the weekend of 13th – 15th September. The historic racing circuit in the Eifel hills will be hosting the penultimate event of the 2019 season. Comments after the race Daniel Juncadella Qualifying: P18 Race: P12 Start number: 23 Car: Aston Martin Vantage DTM “That was a tough race today, and I was really struggling with the car. On the second stint, I gave 110%. It was extremely exhausting, but I’m happy about my performance. Towards the end of the race, I was able to close the gap on the group in front of me, but it was not enough to finish in the points. I gave it absolutely everything I’d got, but unfortunately this was not our weekend. We now have to analyse the areas in which we can improve.” Paul Di Resta Qualifying: P15 Race: DNF Start number: 03 Car: Aston Martin Vantage DTM “We did a long first stint, and things were once again looking good for us. We might have had a nice points finish today. But if you go to the limit in technology, you sometimes come up against problems. We still need to find out though whether being pushed off into the gravel trap by another car was the cause of my problem. Anyway, we were in contention for points, which is a good sign.” Ferdinand von Habsburg Qualifying: P17 Race: DNF Start number: 62 Car: Aston Martin Vantage DTM “The race was very short. I suspect that I may have had a similar problem to the one I experienced in the first qualifying session. We have to take a close look and analyse the reasons for it. It’s a pity that I was unable to finish the race because of that.” Jake Dennis Qualifying: P16 Race: DNF Start number: 76 Car: Aston Martin Vantage DTM “What a pity. The race came to a very early end for me. We’re not yet sure what the reason was, but I simply lost power all of a sudden. Before then, I’d got off to a good start and was immediately able to overtake several cars, which put me in a points-scoring position on the first lap until I had to retire on the second. Unfortunately, it’s turned out to be a disappointing day for me.” Dr Florian Kamelger, Team Principal “That was a disappointing outcome to the race. Daniel was able to strike a positive note, at least, with his consistent performance and P12 finish. The retirements of Jake, Ferdinand and Paul due to technical issues show that we still have a lot of work to do to get our biggest weakness under control, namely reliability. Clearly, the step forward we have made in terms of performance has come at the expense of reliability. Now is the time for keeping a cool head and analysing the problems with the car so that we can approach the next race weekend at the Nürburgring with renewed confidence.”