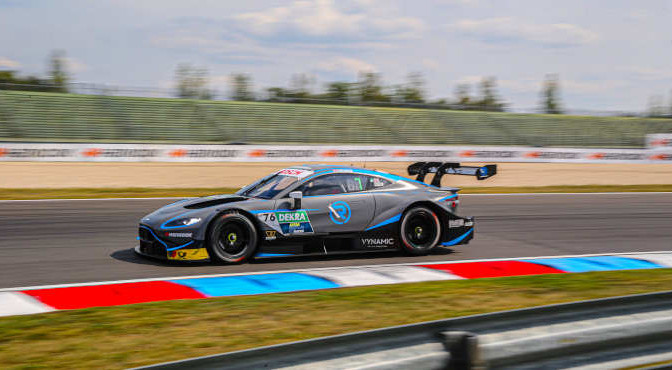 At the Lausitzring, R-Motorsport completed Race 13 of their debut season in the DTM
Jake Dennis, Daniel Juncadella and Paul Di Resta finished eleventh, twelfth and thirteenth respectively, Ferdinand von Habsburg came home in P15 after receiving a five-second time penalty for jumping the start
Jake Dennis: “P11 is pretty close to the points, but I don’t think that much more would have been achievable for us today even if we’d had a trouble-free race”
Dr Florian Kamelger: “The track’s characteristics did not really suit our package, and as a result, not even the tremendous efforts of Jake and Daniel out on track were able to ensure a points-scoring finish”

Qualifying at the Lausitzring saw Jake Dennis (24, Great Britain) as the quickest Aston Martin Vantage DTM driver in 13th position. After his mandatory pit stop on Lap 18, Dennis fought to the end to secure the last point. However, following a battle with his team-mate Daniel Juncadella (28, Spain) he ultimately took the chequered flag just outside the points in P11.

Ferdinand von Habsburg (22, Austria) was the last driver in the field to make his mandatory stop on Lap 22 and finished the 13th race of the season in 15th place after receiving a five-second time penalty. He also gained three places in the race compared to his initial grid slot.

Racing at the Lausitzring will continue tomorrow, Sunday, for R-Motorsport’s four drivers with the second qualifying session at 10.35 am to be followed by Race 2 at 1.30 pm.

Jake Dennis
Qualifying: P13
Race: P11
Start number: 76
Car: Aston Martin Vantage DTM
“I think we achieved the maximum today. We weren’t on top of our tyre management as we usually are. We really suffered a bit with degradation. We’ll have to take a closer look at that now and analyse what happened. P11 is pretty close to the points, but I don’t think that much more would have been achievable for us today even if we’d had a trouble-free race.”

Daniel Juncadella
Qualifying: P17
Race: P12
Start number: 23
Car: Aston Martin Vantage DTM
“Well, at least we found the reason why I had to struggle in qualifying. One of the dampers was broken and some of the tyres had not been balanced properly either. That led to a lot of vibration on my first stint, because I used the set of tyres from my second qualifying run. As a result, my pace was not right at the start of the race. Apart from that, I got away well and moved up into P13. My speed was much better after the pit stop and I was able to match the pace of drivers in the Top Ten. Unfortunately, I lost too much time at the start.”

Paul Di Resta
Qualifying: P16
Race: P13
Start number: 03
Car: Aston Martin Vantage DTM
“The first few laps were quite tough and then we had a problem with a wheel nut coming loose. That meant I had to pit earlier than planned and the rhythm needed to ensure the best strategy was lost as a result. I paid the price. It was a long race, but that’s just the way it goes sometimes.”

Ferdinand von Habsburg
Qualifying: P18
Race: P15
Start number: 62
Car: Aston Martin Vantage DTM
“According to the steward’s decision I was handed a five-second penalty for a jump start. My race was over after that. Unfortunately, our strategy did not work out. We had anticipated heavier tyre degradation for our competitors, which was the case in the practice sessions. However, it didn’t happen in the race, so I lost a lot of time during the first stint. From that perspective, it was a good test and I was able to learn a lot, but in the end, it didn’t pay off.”

Dr Florian Kamelger, Team Principal
“Today’s result was not what we’d hoped for. We did not finish in the points this time, coming home 11th, 12th, 13th and 15th. The track’s characteristics did not really suit our package, and as a result, not even the tremendous efforts of Jake and Daniel out on track were able to ensure a points-scoring finish. We must now analyse the data from the race to find where we can improve tomorrow.”

Foto: At the Lausitzring R-Motorsport got their seventh race weekend in the DTM underway, Copy: R-Motorsport