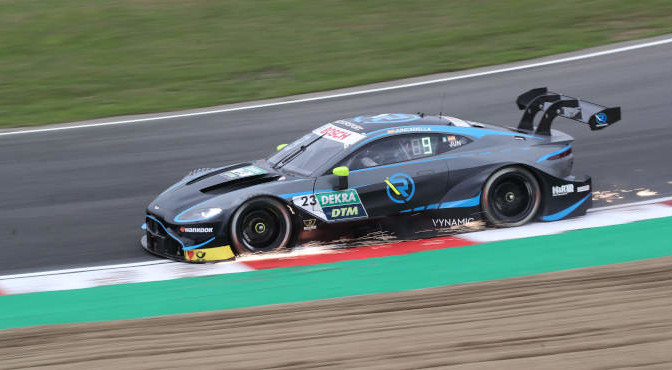 1984 to 2019: The DTM will pass a major milestone on Sunday at the Lausitzring
The latest generation of DTM vehicles will reach top speeds of more than 260 km/h and an average speed of 166 km/h at the Lausitzring.
Florian Kamelger: “After the discernible upward trend in recent races and the three points-scoring finishes at Brands Hatch, Daniel, Jake, Paul and Ferdinand are definitely looking forward to the next challenge at the Lausitzring”

Milestone at the Lausitzring: R-Motorsport and the Aston Martin Vantage DTM are set to contest the 500th race in the history of the DTM.

The seventh event of the 2019 DTM season takes R-Motorsport to the Lausitzring this coming weekend (23rd 25th August). The technically challenging circuit situated halfway between Berlin and Dresden has been a fixture on the racing calendar since 2000. On Sunday, it will be hosting the 500th race in DTM history.

The new generation of DTM cars will reach a top speed of more than 260 km/h on the approach to the first corner and an estimated average speed of 166 km/h over a full 4.57km lap. The fastest corner is Turn 9, which is negotiated at more than 150 km/h and generates a force of 2.2 G on the drivers. The slowest point on the track is Turn 4 taken at 85 km/h. Here, the drivers are subjected to a force of 1.44 G at the braking point. Going into Turn 1, it is a massive 2.4 G.

The race weekend starts on Friday at 11:55 CEST with the first free practice session, followed by FP2 at 16:20 CEST (both shown on the livestream service of ran.de). The drivers get down to serious business of the weekend on Saturday at 10:35 CEST when the first qualifying session takes place. The lights go out on the gantry for Race 1 of the weekend (and the 499th in DTM history) at 13:30 CEST. TV coverage on SAT1 commences at 13:00 CEST. Sunday’s qualifying and race – the 500th – will take place at the same time as the day before.

Comments on the forthcoming race weekend at the Lausitzring

Jake Dennis:
“My first DTM season has so far had the customary ups and downs. The races at Assen and at the Norisring were difficult for me, but fortunately I managed a comeback at Brands Hatch where we sorted out our problems. Consequently, I’m looking forward to the remaining race weekends. I have never competed at the Lausitzring before, and I only know the track from test drives there. It’s a challenge to learn the layout. To be fast, you have to get into the flow. Preparing for an unknown track is always difficult – you just have to get stuck in right from the start on Friday. Work on the simulator at the factory plays an important role here. My objective is to score points in both races. Our pace has improved recently, and we are gradually closing the gap on the other two manufacturers. Qualifying is going to be tricky, but we can certainly fight back in terms of tyre wear during the race.”

Paul Di Resta:
“Generally speaking, it doesn’t matter much to me which track we are competing on. However, I associate very special memories with the Lausitzring because it was where I had my very first DTM victory. The track is characterised by its bumpy surface and slow corners. This makes it very difficult to find a good compromise setup. Tyre degradation may be high or low depending on the sector. The track takes a lot out of the rear tyres because of its extreme acceleration zones. My race win in 2008 is clearly my fondest memory of the Lausitzring. This year, my objective is to finish in the Top Ten and score points. We had a lot of bad luck on the recent Brands Hatch weekend, but our pace was very good in both races. Now we are concentrating on being on top form at the Lausitzring and pulling out all the stops.”

Ferdinand von Habsburg:
“I am satisfied with the progress I’ve made this season. As the youngest rookie in the field, I’ve been able to demonstrate that my qualifying and race pace show promise and that I am constantly improving. The test runs at the Lausitzring before the start of the season enabled me to gain valuable experience driving the Aston Martin Vantage DTM on this track, which should come in useful next weekend. It’s the first time this year that has been the case. Hopefully, the prior experience will help me in the free practice sessions, where I’ve so far always had some catching up to do, and also in my qualifying performance. The standout features of this track are probably the bumpy surface and the kerbs, especially in Turns 6 and 7. You have to have a good feel for the ideal racing line to get into the right rhythm. I took a lot of notes during the tests, and I hope that they will help me in free practice. Between Brands Hatch and the Lausitzring, I’ve taken a bit of time out to recover and to prepare for the last three race weekends of the season. I’ve also been to Vynamic to see the hard work being done behind the scenes by all the team members who don’t usually get themselves in the limelight. Without them, we wouldn’t be where we are today.”

Daniel Juncadella:
“I am personally very satisfied with the season so far. Recent weekends have been very impressive, especially at Brands Hatch, where we made great progress in terms of performance. As regards to my expectations for the Lausitzring, all I can say is that I will be working hard with my engineers to get the maximum out of our car. During the joint test sessions in April, we were looking good on the track, especially on the long runs. For that reason, I think we can be reasonably optimistic about the weekend. The circuit is a real challenge, and I especially like the second sector. We used to drive on the short configuration, but since last year we’ve also incorporated the long back straight. The medium fast Turns 6, 7 and 8 are really cool. My best memory of the Lausitzring is getting a first points result in the DTM. It was my first DTM season in 2013 and, if I remember correctly, I progressed from 14th on the grid to sixth. In the race, I had a very good last stint in which I overtook a lot of cars with some nice passing moves to finish in P6.”

Dr Florian Kamelger, Team Principal
“The Lausitzring is completely different from Brands Hatch in terms of the demands it makes on our Aston Martin Vantage DTM. The home straight and the longer back straight don’t exactly suit our car, but because of the combination with the more twisting and technically demanding infield, I’m expecting us to be reasonably competitive this weekend. During the joint test drives with the other manufacturers at the Eurospeedway in April, we were able to compile data, which is obviously a big help with our new car. After the discernible upward trend in recent races and the three points-scoring finishes at Brands Hatch, Daniel, Jake, Paul and Ferdinand are definitely looking forward to the next challenge at the Lausitzring.”